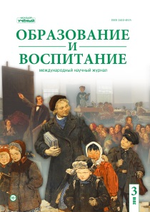 Abstract. The purpose of the operational control model of the production process in the cotton seed milling area is the implementation of an algorithm that helps to formalize the procedure for identifying the mismatch of the actual progress of the planned task from the calculated one.

Introduction. Let's imagine the process of the fulfillment of the planned task in the area of grinding the cotton seeds by the oil extracting plant in the form of a decision diagram considered in [1]. The volume of the planned assignment Ypl can be set by the laboriousness of all orders in the planned period Tpl. The complexity of the planned works is determined taking into account the throughput of the most overloaded group of equipment, which is set by the planned useful time fund Fpl of the work of the site in the period under review.

- reserve in the capacity in case of unforeseen situations. Figure 1 shows a diagram showing the progress of the planned task.

The tangent of the slope of the segment OB (

) determines the average speed of the site, ensuring the existence of the planned volume of work Vpl during the time Tpl:

This speed is set by the planned bandwidth. In the case of running the section with the minimum speed, which is set by the maximum throughput Fmin, the scheduled task will be executed in the time Tmin, that is.

This diagram illustrates quite well the planned process of performing a homogeneous task, that is, it is its model. However, the planned task for the site consists of various orders (modifications of the cotton seed) with unequal labor and, in general, different start and release dates, that is, the distribution of the planned task is not uniform, and the model of the process of executing the planned task on the site Can be represented as a superposition of execution of some set of planned orders.

Fig. 1. diagram reflecting the process of fulfilling the planned task

in the area of grinding grain

Relevance. Modern domestic production, in particular, oil extraction, is characterized by a significant share of manual labor, which causes a high percentage of deviation from the normal course of planned tasks. In addition, visual control of the quality of produced oil products, production plan, human operator is subjective and low productivity, which also reduces production efficiency. Plans are not always carried out as planned. People do not always accept the rights and duties delegated to them. Management does not always manage to properly motivate people to achieve their goals. The conditions of the environment change, technology and technology, and the organization must adapt to them accordingly. To automate the process control of the production process, it is advisable to develop new or modify known systems or mathematical models for controlling the course of production.

Decision. Consider the process of implementing a separate planned order. The planned volume of work by order

can be represented quantitatively in the form of planned rates of launching modifications of cottonseed [2-3]:

- is the number of parts in the batch;

- the number of operations performed on the order.

This work must be done in the time interval,

- is the planned order processing time;

- planned time of order release from the site;

- planned start time (beginning of processing) of the order.

In the case when all the resources of the site are provided for the fulfillment of the order and other orders are not impeded to fulfill the order, the minimum order processing time is equal to its ideal production cycle

and the maximum average speed of the order, equal to

is determined basically by the capacity of the limiting group of equipment for this order.

The process of fulfilling the order is presented in Figure 2. Through the

point, the segment BC is drawn parallel to the segment AO. Point Tmax is marked on the axis of the time of the deadline for launching the order l, when it is still possible to execute it when passing through the site with the maximum speed, which is the average speed of the order for the operations of the technological process.

Where tik - is the duration of the operation; θmh - is a set of oil products that can be processed simultaneously on the equipment group l performing operation k.

Where Kl - is the number of operations performed on a grinding lot of grain of type l;

For the case of successive movement of a grinding grain lot

The order will move on the site at a rate determined by the processing speed of the grinding grain lot in different operations. Figure 3 shows the movement of the order for three transactions.

With the influence of other orders, the movement of the order will consist of processing on transactions interrupted by waiting before the transaction is performed. The process of executing a planned order for an interaction of orders can be represented in the diagram (Figure 3), where the broken lines reflect one of the possible paths for completing the plan. 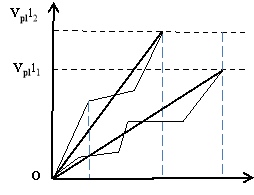 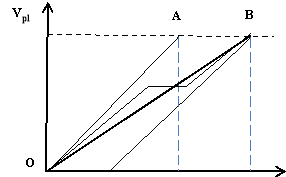 All orders processed on the site at the current moment of time can be broken down into the following categories: leading, going according to plan, lagging behind, impossible to meet. The assignment of an order to a certain category can be performed by the tangent of the angle of the clone of the segment connecting the current point of the process Z with the execution point of the plan B, to the time axis, i.e., by the required average speed of the remaining work amount performance by the established time:

Consider each category of orders. If the process of fulfilling the order at the time

is at the point Zl, then

, the order passes through time

to the point E on the trajectory of the planned average speed; wherein

At point E, you can come from the beginning of the graph (point 0) when moving with the planned average

speed while doing this

Thus, when moving from the point Z1 with the maximum speed to the moment of time

, the backorder order gets to the point E, and in the future the order processing can be conducted in the planned mode.

For an order that is at time

that is, the order goes ahead and there is an opportunity if it hinders the movement of backward orders, slows down its movement and even suspends its processing for a while

Until the moment when the process of fulfilling the order comes to the point P2 on the path of the planned average speed of the order.

Define from the diagram in Fig. 2.7 value

In the case when

Execution of the order follows the plan and its movement cann out be corrected.

then it is impossible to fulfill the order on time even when processing it with the maximum average speed for the adopted site structure, therefore it is necessary either to change the structure of the site by switching some equipment groups to the implementation of the remaining operations for this order, especially limiting, or, if this is not possible, Decide to change the plan.

Conclusion. The progress of orders is controlled by the control system not continuously, but at discrete instants of time, called control points or polling times of the system on the system operation time axis; In this case, some algorithm for forming the moments of polling the system is assumed. In the process of monitoring the progress of production, based on the developed model, you can get answers to the following questions: what have we learned? What next time should I do differently? What is the reason for the deviations from the intended? What impact did monitoring have on decision-making? Was the impact of control positive or negative? What conclusions should be drawn to develop new goals?