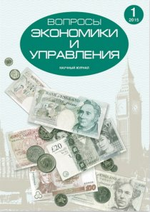 There is described the new way of socio — economic development of regions in Russia through the creation of territories of advanced socio-economic development (TAD), described the mechanism of their realization on territory of Russian Federation, analyzed the economic effect of their introduction. In addition to this, the article includes a comparative analysis of the use of TOR in Russia and in countries of the Asia-Pacific region, given comparative characterization of free economic zones and territories of priority development in the article. Moreover, the article includes the advantages and disadvantages of the introduction of these territories in Russia, describes the preferences that will be available to the residents of such territories, introduced the conclusion about expediency of application of this practice in Russia.

The territory of advanced socio-economic development is part of the territory of the Russian Federation, including the closed administrative-territorial entity, which in accordance with the decision of the Government of the Russian Federation establishes a special legal regime of realisation of enterprise and other activity in order to create favourable conditions for attracting investment and achieving accelerated socio-economic development and create comfortable conditions for the viability of the population [1].

Advanced development zones are export-oriented territories with preferential conditions for businesses. Their creation signals Russia’s strategic Asian pivot that comes amid toughening penalties on its exports to Europe and Russia-imposed embargoes on imports from Europe.

TADs will have even more favourable business conditions than in the Russian Special economic zones (SEZ), and residents of TAD will be provided the best (competitive) conditions of doing business in comparison to similar areas operating in the Asia-Pacific region. For example, the profit tax on TAD will 10 % while it is 33 % in USA and 26, 4 % in Japan!

Conditions of territories of advanced development in Asia-Pacific countries

The procedure of the creation and management of TAD resembles the procedure of the establishment and management of special economic zones (SEZ): they also are created by the government, the zones are managed by the state company, the framework is based on federal funds, and the residents have tax benefits. But the government dissatisfied efficiency of SEZ.

The TADs have a number of advantages over zones: their profile is wider (unlike the SEZ they are not divided into types), more favorable tax incentives. The SEZ is based on the initiative of the regional authorities, and TAD — on the interests of the investor. According to experts' estimates, due to the introduction of TODs, business costs will be reduced on 40 %!

«The main difference between TAD and SEZ will a creation conditions specifically for a particular investor», — explains the representative of the Ministry of development of the Far East. In the Ministry of development of the Far East rely on the experience of Asia-Pacific countries, where the territories of advanced development are well established. “For example, China, which has created special areas for specific projects”, says deputy of CEO in International center of regional development Ole Stolyarov. “Zone of Shenzhen was established for the production of laptops. So was created a company Lenovo. According to experts, “the desire to copy this experience is praised, but the TADs in Russia have disadvantages: they have no business model”. “Tax cuts are not important. The main thing — there is no strategy for the development of such zones and there are no people who could select investors and create conditions for them», — says Stolyarov [5].

The project was launched more than nine months ago, and Putin said it was time for results. Galushka said the task was difficult, but investors would show interest when the necessary conditions, such as tax preferences, are created. He said he planned to make the region a lucrative investment opportunity for foreign business, which could attract 1 trillion rubles ($27.6 billion) in investment across 14 platforms.

Financing of TADs will be carried out mainly by private investors, but some money will be from the state budget. «What would the advanced development territories give us? In the 10-year perspective, the first 14 territories of advanced development chosen today and suitable for this — a ready-to-use product, so to speak — it is 1 trillion rubles in private investment, non-budget investment, which we can attract and which we would not be able to attract without such a tool», the Russia’s Far East Development Minister Alexander Galushka said [4].

How the government is planning to develop the Far East? 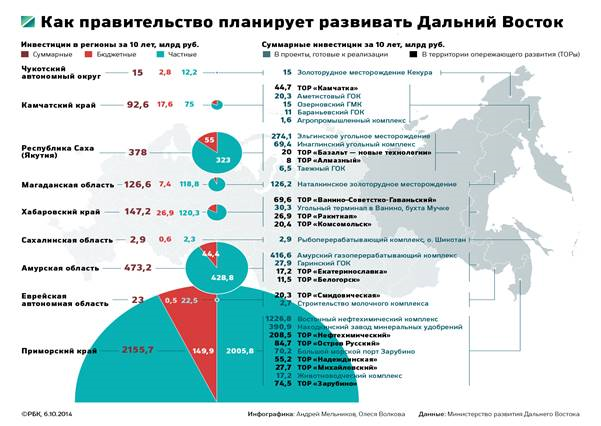 Galushka said 18 investment projects, worth 2.5 trillion rubles ($69 billion), have been already chosen out of 340 projects submitted. Those projects would form the basis of the Far East’s new economy, he said.

Galushka said a special committee in charge of the development project had drawn up a list of the region’s 4,400 largest companies that export $10 trillion worth of products to the Asia-Pacific region.

In June 2014, the Far East Development Ministry unveiled a targeted support program for the region that is expected to attract some $65 billion in investment.

All in all, I can conclude that the territory of advanced development became the attempt of Russia to follow the Chinese way of development through the creation of special areas — «locomotives» of the economy. However, the ambitious statements refer us to the sad experience of the introduction of these special areas in the 90s. Will the Far East the Russian analogue of the «Chinese economic wonder?” Time will tell.

3.                  Investment portal of Khabarovsky krai. The main parameters of the new territory of advancing socio-economic development were discussed in Komsomolsk-on-Amur. URL: http://invest.khabkrai.ru/en/news/162

The Far East: Economic role and position for Russia in the...

Setting up conditions of professional economic development of provinces in the Far East on the basis of potential on natural reserves, industry, scientific and officer capacity in the framework of sec-tor development strategy of the Russian Federation...

Currently, the scientific study of the export diversification of Russia, as a full member of WTO, is new... Изменение структуры экспорта из России после...

The Far East: Economic role and position for Russia in the...

Setting up conditions of professional economic development of provinces in the Far East on the basis of potential on natural reserves, industry, scientific and officer capacity in the framework of sec-tor development strategy of the Russian Federation...

Currently, the scientific study of the export diversification of Russia, as a full member of WTO, is new... Изменение структуры экспорта из России после...