Role Web 3.0 technology in our life

The internet has become a complex, seamless, and often imperceptible part of our everyday lives. In spite of this, some people think that to get excellent life have to use about such connection. The only thing that we have to know –internet is changing every minute, the laws are changing very quickly, and we try to see and learn every step.

To be known, nowadays connection as internet works at web 2.0. For example, Facebook, YouTube, Google, Mail and others connect with people helping Web 2.0.

If all our connection uses Web 2.0 What we expect from Web 3.0? In this article I explain ways of using Web 3.0 technologies in our life.

A lot has changed since the free of Apple’s first iPhone in 2007. We have seen a strong shift in user behavior so away from desktop computers in favor of new form-factor devices. The enabling technology has also brought about an entirely new class of Web-enabled applications and architectural ideals. Meanwhile, monetization opportunities that capitalize on these changes are appearing. It is from a confluence of these changes that we assert Web 3.0 has begun. 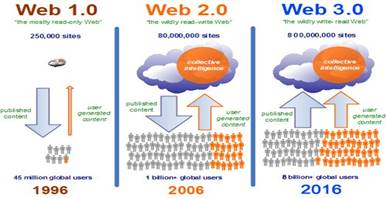 As we saw, as compared with model Web 3.0 than model Web 2.0, quantity sites and users 8 time increase.

These technologies are combined in order to provide descriptions that supplement or replace the content of Web documents. Thus, content may manifest itself as descriptive data stored in Web-accessible databases,[2] or as markup within documents (particularly, in Extensible HTML (XHTML) interspersed with XML, or, more often, purely in XML, with layout or rendering cues stored separately). The machine-readable descriptions enable content managers to add meaning to the content, i.e., to describe the structure of the knowledge we have about that content. In this way, a machine can process knowledge itself, instead of text, using processes similar to human deductive reasoning and inference, thereby obtaining more meaningful results and helping computers to perform automated information gathering and research.

An example of a tag that would be used in a non-semantic web page:

Tim Berners-Lee calls the resulting network of Linked Data the Giant Global Graph, in contrast to the HTML-based World Wide Web. Berners-Lee posits that if the past was document sharing, the future is data sharing. His answer to the question of «how» provides three points of instruction. One, a URL should point to the data. Two, anyone accessing the URL should get data back. Three, relationships in the data should point to additional URLs with data.

The Semantic Web Stack illustrates the architecture of the Semantic Web. The functions and relationships of the components can be summarized as follows:

XML provides an elemental syntax for content structure within documents, yet associates no semantics with the meaning of the content contained within. XML is not at present a necessary component of Semantic Web technologies in most cases, as alternative syntaxes exists, such as Turtle. Turtle is a de facto standard, but has not been through a formal standardization process.

RDF is a simple language for expressing data models, which refer to objects ("web resources") and their relationships. An RDF-based model can be represented in a variety of syntaxes, e.g., RDF/XML, N3, Turtle, and RDFa. RDF is a fundamental standard of the Semantic Web.

[1] We may call Web 3.0 technology as Semantic web

SPARQL is a protocol and query language for semantic web data sources.

We will support this assertion by looking at the types of changes that occurred during the Web’s previous era to support labeling that Web 2.0. We then apply those criteria to show how comparable changes are once again occurring, thus justifying the acknowledgement of an entirely new generation of advancement on the Web. Let’s start with a close look at Web 2.0.

In the opening remarks of O’Reilly’s first Web 2.0 conference in 2004, Tim O’Reilly and John Battelle defined Web 2.0 as «Web as a platform», in which software would be built upon the Web rather than as a desktop application [1]. If we answer to this idea, Jesse James Garrett wrote an essay a year later in which he coined the term AJAX (Asynchronous JavaScript and XML), popularizing a client-side technique that became accepted best practice for implementing O’Reilly’s vision of the Web as a platform.

The increasing amount of time that Web users spend on new form-factor devices is creating a challenge for content creators, who are finding that their content does not monetize as well through these devices. According to Mary Meeker of Silicon Valley-based venture capital firm Kleiner Perkins, the effective CPM (cost per 1,000 impressions) for mobile devices is five times lower than that of the desktop [6]. Not all devices are created equal, however, with tablets generally delivering higher eCPM rates than phones. Nonetheless, the point remains that the ad-banner and paid-click advertising models may not best fit the use patterns of these new mobile devices. Where one window of opportunity closes, however, another opens.

It has been only six years since the iPhone was first released, which set into motion many of the changes we have discussed. It is difficult to grasp the extent to which the Web has changed in such a short period of time. When reflecting upon all of this change, one has to wonder if it is sufficient to declare that an entirely new generation of Web innovation has occurred since Web 2.0, and so we sought to answer that question here.

Through reviewing the innovations most commonly associated with Web 2.0, it appears that what defines that generation really comes down to a convergence of three things: new enabling technology, enhanced monetization opportunities, and consequently new categories of products that resulted in new use patterns for end-users. By evaluating these criteria, we observed that indeed a significant transformation has begun that could be described as a generational advancement. And so we conclude, affirmatively, that Web 3.0 has already begun.