In this research, effort has been made to introduce a method with GIS and Least Cost Path capability for planning road. So that environmental factors such as stability are incorporated in the planning process. After collection of data and the necessary maps of the study area, effective factors in the operation of road construction were determined and classified. After that, the maps of slope, aspect, altitude, land uses, hydrological and lithology maps. The next step was to suggest multiple roads based on different criteria. Then, by overlaying weighted maps of affecting factors find the most suitable road. The results of this study showed that the road was designed by the lest cost path had less earthwork by 78% of the shortest road that can be designed.

Roads play an important role in the country’s unrestructured. Manual road planning has a lot of technical and environmental issues. More recently, simultaneous information management with respect to the important factors in road planning and rapid assessment of the roads has been possible using GIS capabilities [1]. Passing the roads through low to moderate slopes and areas with high level of stability, reduces the costs of excavation, earth filling, land stabilization, excavation gable roofs and earth filling, and thus reduces construction costs [2]. In many studies, GIS has been used to consider a wide range of different factors, which could impact the environment. In the other recent studies, technical issues and observing road geometric principles have been considered. Many scientist have used some factors to decide the best possible outcome of road planning including geology, soil (soil texture and grading), slope, land use, water streams, faults and altitude based on questionnaires and in a relative manner [3].

II. MATERIALS AND METHOD The study was carried out in Syrian Desert. Between two small cities Tadmor and Alraqah. The area is approximately 10,287 km2 in the center of Syria. The area is located between 38˚5'8" and 38˚55'0" of Longitude, and 34˚32'9" and 36˚34'41" of latitude. The altitude ranges between 105 to 1300 m above sea level. To plan routes based the following procedures were carried out:

− Identify affecting the most important factors needed for the planning the road.

− Creating and categorizing the map of affecting factors

− Evaluating different road variants, choosing the most appropriate road and compare it to each other with existing road network using Digital Elevation Model (DEM), the affecting factors maps were produced.

The stability map was prepared by overlaying of soil texture and bedrock maps, the map was created form landsat-7 satellite image, each type of soil was given a certain mark according to its stability. 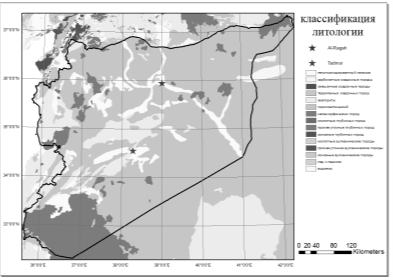 Slopes play a huge rule in determining the cost of the road as the earthwork and the profile of the road depend on them, so the second factor was the slopes of the road. As the lithological map the slopes was classified and given a mark, In which the less the angel of the slopes is the higher its mark. The slope map was created from DEM extracted form USGS.

Fig. 2. The map of Slopes and its marks

The next key factors to determine the cost map was the land use map and the hydrological map. Land use plays a big role in the cost of the road, as when the road pass through high cost land. Each land use was classified depending on its value and created a buffer zone form 10-200 m. After that each land use was given a mark depending on its value. The land use map was acquired from the Syrian land use administration. The hydrological map was classified also depending on the type of rivers whether they are seasonal or unseasonal. A buffer where created around each of them, and then each was given a mark. The hydrological layer effects the overall cost by add cost to the elements needed to drain water.

The final step to create the least cost path surface was to assemble the hole data into one cost surface the following equation was used: 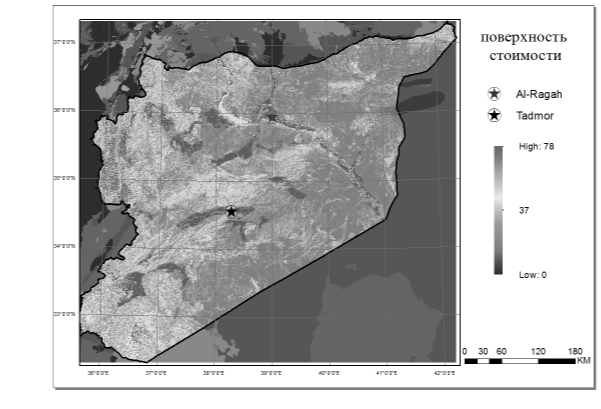 Fig. 3. The cost surface of the studied area

The roads that were suggested are a straight line between the two cities a least cost path road based on Dijkstra algorithm, a generalized least cost path, and user defined road. All of these roads were created using ArcGIS 10.3 program. 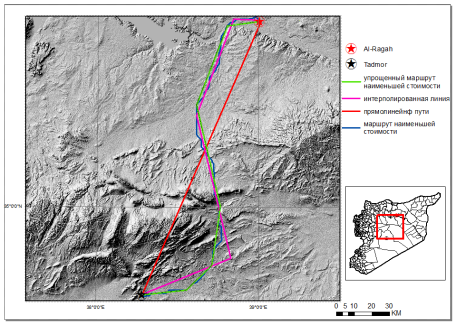 Fig. 4. The roads used for assessment

Each of the four road was evaluated in two ways through the cost surface and throw the DEM for the region. The relative cost represents the cost of each pixel the of the surface of cost that passes through the road. Since it is the surface of the cost represents what we want from the roads to pass, it would be the most reliable. The percentage of the effectiveness are all calculated in according to the least cost bath.

The results of each type of roads

Earthwork for each type of roads

As seen from the tables the least cost path is the effective road to build.

The use of task method of training of specialists in the field of...

GIS is computer system that is able to create, store and use data on the location of objects, events

As a result student acquires 50–90 % of a training material.

The relation of stream sediment grain sizes and its geochemical...

2. Generalized geological map of the study area. Materials and Methods.

Using GIS and statistics to study in&#ﬂ;uences of geology on probability features of surface soil geochemistry in Northern Ireland.

Application the method of the analysis of hierarchies...

The algorithm of teaching is constructed: need of this method, discussion of a classical example, the

This type of interactive method requires to study teaching material on the theme before starting discussion.

Unlike audio-lingual and other methods based on repetition and memorization, the communicative method sets «open-ended» exercises: the students themselves do not know what their activity in the class will result in; everything will depend on the reactions and responses.

Linguistic culture is «a humanitarian discipline that studies the material and spiritual culture embodied in a living national language and manifested in linguistic processes» [8, p. 46].

In the process of linguistic and cultural analysis, methods of culturology and linguistics are used selectively.

The joint activity of students in the process of mastering the teaching material means that each contributes its own individual contribution; there is an exchange of knowledge, ideas, and methods of activity.

Heeden, T. 2003. The reverse jigsaw: A process of cooperative learning and discussion.

The use of task method of training of specialists in the field of...

GIS is computer system that is able to create, store and use data on the location of objects, events

As a result student acquires 50–90 % of a training material.

The relation of stream sediment grain sizes and its geochemical...

2. Generalized geological map of the study area. Materials and Methods.