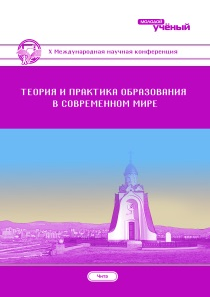 The history of Russian military Sinology and the teaching of the Chinese language in military educational institutions originates in the first half of the twentieth century. Back in 1940, following the orders of the People's Commissar of Defense of the USSR, a higher military educational institution with a philological bias was established and called the Military Faculty of the Moscow Institute of Oriental Studies. Its main task was training servicemen with the knowledge of Oriental languages. Two years later, a new higher educational institution was established on the basis of the two military faculties of Western and Eastern languages and called the Military Institute of Foreign Languages of the Red Army. Its successor and the leading organization for training military specialists with knowledge of Oriental languages is now known as the Military University of the Ministry of Defense of the Russian Federation. In addition, since 2008, the training of military translators has also been carried out on the basis of military educational centers [6].

At present, the main practical task of training military translators in Chinese is to ensure activity of the country's top military and political leadership (the Government of the Russian Federation and the Ministry of Defense of the Russian Federation) in foreign policy. The purpose of training is to prepare an officer for specialty 45.05.01 «Translation and Translation Studies» with the specialization «Linguistic Support of Military Activities». In accordance with the Federal State Educational Standard of Higher Education a graduate of this speciality should be fluent in the profiling Chinese and the second foreign language (in the vast majority of cases — in English), have professional competence in the field of organizational, communicative, information and analytical research activities.

Since a military interpreter with knowledge of the Chinese language is primarily a serviceman, he must understand the current phenomena and processes of military affairs, know the nature of modern wars and armed conflicts, the laws and principles of armed struggle, the foundations of the national security of the state, the structure and purpose of types and branches of armed forces, the requirements for the organization of combat training in the army and the navy, the basis for the combat and mobilization readiness of troops (forces), the basic tactical and technical characteristics of the military angling and military equipment. Also, a high level of military translation can be achieved only if future specialists have completed a full course of military training [1].

It is worth noting the presence of certain difficulties in the preparation of military translators among sinologists. In many civilian universities the lessons of Chinese are conducted by a native speaker, and in some cases by several speakers. This situation is determined by dividing the course of studying the Chinese language into aspects: a practical course of speech communication, social and political translation, a group of theoretical aspects of the language etc. In addition, students of civilian universities can go abroad for language practice and take part in various programs. However, in practice, such an approach cannot be realized in military higher educational institutions, the graduates of which often have the first experience of communicating with native speakers of the studied language only after graduating from the university during their service. The heavy workload on students in military universities is also considered one of the common characteristics of the training systems for military interpreters both in Russia and abroad.

In addition to textbooks and teaching aids, educational and methodological developments in encyclopaedic and periodical military literature in Chinese and Russian languages, it is also necessary to add specialized dictionaries of military-based phraseology to compulsory educational and methodological literature in military history classes. It is advisable to study PUMS of the Chinese language during lectures and practical classes: during lecture sessions within the framework of the topic under consideration, this will enable students to acquire theoretical knowledge; in practical exercises this will allow i to develop the basic skills necessary for a military interpreter in practice [3].

On the basis of available methodological guidance papers, it is possible to present a methodical system for teaching Chinese PUMS in the context of military translation. By method of teaching, we mean the way in which the instructor and the learner are organized in an interrelated activity, aimed at achieving the stated goals of education, upbringing and development. The main method used in the training of Chinese PHE is an exercise.

The use of PUMS in Chinese pursues its goal — it should be a certain communicative effect due to the imagery, brevity, depth of this linguistic phenomenon. This effect is almost completely achieved by the perception and interpretation of the PUMS by the native speaker of the Chinese language. Such a result is realized, first of all, due to the generality of the picture of the world (background knowledge) of the author and the reader-bearer of the language. These conclusions allowed us to formulate the goal of the training, which involves the formation of cadets' understanding skills and intercultural interpretation of Chinese PUMS in the process of reading an authentic text or a fragment of an authentic text in order to extract all types of information contained in them.

This goal led to the formulation of the content of the training, in which we included: a positive attitude towards the opening of the intercultural significance of PUMS, the formation of openness towards intercultural dialogue, the desire to understand the new cultural content, curiosity about the opening of the deep subtext of PUMS; a set of knowledge of linguistic and sociolinguistic features of PUMS of the native and studied (Chinese) languages, knowledge of the profound philosophical content of Chinese idioms.

Our research has shown that in order to achieve learning goals it is important to use such innovative technique as intercultural commentary. When doing researches on the issue, we found that this technique is aimed at interpreting, explaining (in Chinese or Russian) the content of PUMS so that the cadets could understand their intercultural meaning [5].

It is advisable that our methodical system of cadets' training for understanding and interpretating of Chinese PUMS should be embodied in the course of teaching Military phraseology. The manual should include three parts: an introductory theoretic part, the main part comprised of a text part and a reference part. Work on Chinese PUMS should be conducted on the basis of gradual formation and development of understanding skills and skills of intercultural interpretation of Chinese PUMS. Accordingly, we developed the following three groups of exercises for the training course.

The interaction of the teacher and students in the course of teaching the understanding and interpretation of PUMS when reading texts in Chinese is completely subordinate to the ideology of the personality-activity approach. This approach offers subject-subject educational partnership in implementing the principles, methods of teaching, using educational means in the joint solution of educational communicative and cognitive tasks. The teacher is not an expert in interpreting the cultural phenomenon inherent in the content of PUMS, and should not impose his or her point of view on the student.

He must share his own conclusions with other cadets, openly enter into a discussion on the interpretation of PUMS.

Everyone knows the well-known times of confrontation between the USSR and the USA that is called «The Cold War», when in 20th century the America and the United Arab Emirates entered into an agreement and started a price war by lowering the price on «Black gold» and the

Everyone knows the well-known times of confrontation between the USSR and the USA that is called «The Cold War», when in 20th century the America and the United Arab Emirates entered into an agreement and started a price war by lowering the price on «Black gold» and the