The role of synthetic and analytic in modern English 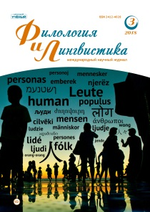 Questions of «synthetism» and «analytism» (or «synthesis» and «analysis») are one of the cardinal linguistic problems developed synchronously and diahronno on the material of the most different Indo-European and non-Indo-European languages. These questions are closely related to human perception of the surrounding reality and peculiar breaking this reality in the structure of the language. Phenomena reality is not perceived by people individually, however «analytically».

It is always a complex of signs — the subject and its position in space or its relation to the speaker, his characterization from the point color, volume, statics, dynamics, etc. In the language of these complexes decomposed into component parts. Its limit this activity human consciousness reaches in a dictionary where each highlighted the lexical unit understands its possible semantic variants, and in grammar in which from a complex and intertwined system relations between objects and signs, etc. highlights the main units transformed into one or another grammatical morphemes (N. A. Laponogov, 1967). The problem of «synthesis» and «analysis» is thus acts as a problem of private and common.

The terms «synthetism» and «analytism» are interpreted differently, but traditionally under the «synthetism» understand the expression of one unit of language in one grapheme word, and under «analyticism» — the expression of one unit language in different grapheme words that are analytical constructions (N. A. Laponogova, 1967).

It is common to speak of «synthetism» and «analytism» when applied to grammar and very rarely — to vocabulary. However, outside of Analytics, to determine that such a «word» is difficult.

Being the main line of development of Romance languages that have passed difficult path from synthesis to analysis in their grammatical structure, this problem it was considered in particular detail in romanistics. Exactly

Romance languages were the basis for the initial development of these questions, who then became interested in the Germanists, Slavists and representatives other language groups.

In the formation of the grammatical structure of the Germanic languages, development from synthesis to analysis was not associated only with grammatical by categories. As a rule, the analyticism of the grammatical system was based on lexical units that lost their lexical independence and filled with one or another grammatical content. (For example: the transformation of a number of verbs, through the auxiliary level, into indicators time, faces and numbers; lexical devastation of some prepositions, accepting case functions; adverbs accepting functions degrees of comparison of adjectives, etc.).

The continuous development and formation of new forms is observed in any lexical and grammatical group. The reasons for the formation of certain forms are complex and peculiar, and the ways of their development in the general course of formation the structures of a particular language are different.

In the paradigmatic system of the English language, the verb as the most dynamic of all parts of speech, very active in responding to all new language trends and registers them. In the category of the verb can be found the beginnings of the new, which can later cover the whole structure of the language generally. Leaving his genesis in the depths of history, he continues his clearance and in our time. The main lines of its development are traced with of the remote past, and their progressive movement is steady persists, without going beyond the leading trends (N. A. Laponogova, 1967).

The systematic nature of modern English with characteristic prevalence of analytical elements determines the possibility of analyticism in various areas of the language, for example, not only in inflection, but also in word formation. Observations over living facts of modern English show that the means expressions of a single concept by complex lexical constructions limited to complex words and phraseological units.

A special place is occupied by the construction, which, having properties that are common with above named, however, are fundamentally different from them. there is grounds to assert that these constructions which cannot be attributed neither to phraseological units, nor to complex words, have already moved to new category — the category of analytical lexemes.

If we agree that the main condition for the formation analytical forms is their correlation with synthetic forms, then in this case, the presence of analytical lexemes is quite natural, since they have something to relate to: they relate to simple words, «Monolithic» or «synthetic» (N. A. Laponogova, 1967: 51). So, a parallel word to to be tired is to tire just like in Russian language «marry», but «get married». If not always available correlative synthetic and analytical lexemes, then in this. There is a complete analogy in inflection. In Russian, analytical verb forms are found only in one future tense of imperfect of the form: “I will read”, but I will “read.” On the other hand, in a group English perfect there are only analytical forms and There are no synthetic, with which they would correspond.

Thus, analytical forms in one category can arise and develop on the background of synthetic forms of another grammatical category.

If you are consistent, you can imagine in an ideal case a language possessing exclusively analytical forms that are not correlated with any synthetic by forms. But we will still consider it analytical if it is possess characteristic features of the analytical system, namely, if each form in it will consist of a service modifier and lexical — differentiator of elements (N. A. Laponogova, 1967).

This most important, typologically conditioned feature of English lexical subsystem attracted the attention of many researchers such as ai Smirnitsky, G. N. Vorontsova, N. N. Amosov, A. V. Kunin. However, its fruitful consideration was prevented by disputes about the very admissibility of analyticism in vocabulary, and when they ended denying such a possibility (AI Smirnitsky, 1959: 83), the question arose on attributing this phenomenon to morphology, syntax, word formation or phraseology. It remains unresolved for the reason that nature analytical derivation in the vocabulary does not allow to treat it as a phenomenon grammatical (morphological or syntactic); it and not word-formation, since the product of derivation is not a word; finally it's not phraseology, since there is no idiomaticity, but there is a regularity derivations on certain models.

According to I. V. Shaposhnikov source of theoretical difficulties in this important issue served as the interpretation of the word as an element lexical language subsystem. Meanwhile the central position of the word in the macrosystem of a language is due to the fact that it appears in all three of its subsystems — grammar, sound and lexical.

It is illegal to interpret a word as an element of one of them. Lexical subsystem is a collection of nominations, titles for the selected in the surrounding world of objects, processes, qualities. The word is canonical nomination form, and canonicity does not imply obligation. So, official words, undoubtedly being words, but not nominations, in lexical language subsystem are not included. On the other hand, the nomination can be done by combining words. If such a connection fairly regular and stable, it has the same element status the lexical subsystem, as an unofficial word, differing from it analyticity of its structure. A. I. Smirnitsky was right to refuse recognize the possibility of the existence of an analytic word because it would consist of words, and the whole and its part cannot be the same title. The element of the lexical subsystem must be recognized not a word, but lexeme, which can be either single-word or non-word, analytical. The ratio of these two structural types of tokens in one language or another, its most important line characteristic.

General principles for constructing analytical lexemes, on the one hand, the same as for analytical combinations in grammar, on the other hand the same as in synthetic word formation. They combine little by little standard models are two functionally different components — main and service. Semantic function of the main component as the root in the word and how the conjugated verb in the analytic combination consists in carrying the core value, modified in the derivative.

The semantic function of the service component, like affix or auxiliary verb, is to modify the stem values. Understandably, the widespread view of desemantization service components of analytical entities, both in grammar and in vocabulary without foundation, because the change of semantic characteristics of the word due to functional specialization does not lead to the loss of all meaning, to semantic desolation.

Analytical lexemes, as well as individual words, have a part-word characteristic. Among the English analytical lexemes prevail verbs, a lot of nouns. Belonging to the part of speech is determined by the service component of the lexeme, leading in grammatical plan.

Historically, there are four language types based on the account signs and properties of the formal aspects of the word, its ability attach inflection and word formation morphemes: inflectional, agglutinative, insulating, polysynthetic.

Typological restructuring of the English language, especially actively held in the middle English period, affected all of its subsystems and led to a significant transformation of its structural type.