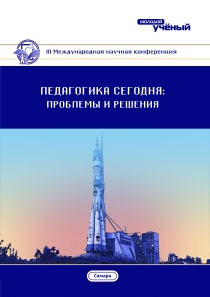 Military cooperation between the Russian Federation and the People's Republic of China is continuously expanding: international exercises are conducted in all operational spheres, military-technical cooperation is developing, and multifaceted consultations are held at the level of defense ministers. For the successful implementation of these measures, a significant number of qualified military specialists of the Armed Forces of the Russian Federation who are proficient in the Chinese language are required to be involved. Performing the functions of a military interpreter requires the specialist to show a high level of professionalism: any mistakes made during translation can lead to misunderstandings and to human victims. Therefore, one of the key issues in educating the personality of a military specialist who is fluent in the Chinese language is the formation of appropriate professional competencies that must be developed in his or her studying the Eastern language.

One of the relevant and poorly studied areas of research in the field of improving the linguistic support of military activities is the study of phraseological units of the military sphere (PUMS) of the Chinese language. They are widely used in colloquial speech of Chinese military men and the media and can be used in such areas as politics, economics, sports, everyday communication. As V. Voitsekhovich notes in his research, phraseological units are «a forge of high aesthetic morality and ethics». Since ancient times, the knowledge of Chinese idioms has served as a formal indicator of the high level of education and significant moral qualities of a person, which has not lost its relevance at the present time.

Modern requirements for the educational level of military translators and the urgent need to study Chinese phraseological units of the military sphere in the educational process of military universities determine the need to identify the structure of professional competence of a military interpreter, as well as to study the role of PUMS in the structural components of professional competence.

By professional competence we generally mean the following:

‒ Possession of a set of skills and abilities that allow to effectively solve a professional problem (mastering the main language studied in its literary form, knowing basic methods and techniques of various types of oral and written communication in this language);

‒ the opportunity to find organizational and managerial decisions, assess their results and bear responsibility for them from the perspective of the social significance of the decisions made;

Thus, a military translator of the Chinese language must perfectly master military vocabulary, understand military texts, must be able to select the right equivalent when translating military terms that have a polysemy or do not have any correspondence with the Russian language, must have the ability to convey the meaning of the equivalent-language phraseological units of the Chinese military language to possible translation transformations in Russian.

Background knowledge, in turn, helps to achieve equivalence, accuracy and adequacy of translation, a more concrete understanding of what a certain saying means. In the development of communicative competence, the study of the Chinese PUMS by the future military translators certainly plays a very important role, since so far a significant number of Chinese PUMS have not been translated into Russian and do not have correspondences in specialized dictionaries. This determines some difficulties in identifying their positive, neutral or negative connotations.

One of the solutions to this problem is the introduction of PUMS along with the description of their origin and the ways of their use into the teaching content of the Chinese language at the military high school. Among specialized skills of a military interpreter we outpoint the following: 1) the ability to perform parallel actions in two languages and quickly switch from one to another; 2) the ability to understand the text «from the point of translation»; 3) the ability to see the deep and superficial structure of the saying; 4) the ability to make the most accurate translation in the absence of direct equivalents; 5) the ability to correctly choose and apply various methods of translation to overcome the difficulties associated with the peculiarities of the source language; 6) the ability to analyze the text of the original, identify the translation problems in it and successfully solve them. In turn, the study of the PUMS of the Chinese language in the framework of these skills also allows us to master the cultural component of their meaning, which can give a presentation to military specialists about the peculiarities of culture and thinking of the Chinese people and Chinese military personnel, in particular. Also, studying the PUMS of the Chinese language entails significant historical and regional studies which enable military specialists to navigate in various historical events and use this information in translation.

An analysis of the PUMS of the Chinese language shows the process of current «demilitarization» of the military vocabulary that can be used in other situations of verbal communication that are not related to the military sphere. Such a process is an illustration of how the meaning of professional terminology changes as a result of its use in a figurative sense. Therefore, when meeting with PUMS, an unprepared specialist may get lost, since the cultural component of the meaning of many military phraseological units is difficult to unravel.

The profession of a military interpreter is a synthesis of two professions — an interpreter and a military man, and predetermines the existence of moral and ethical norms inherent in both of its components, this causes the multifacetedness and complexity of the methods used in teaching military translation, which sees various approaches not only in different countries, but in different military educational institutions.

According to expert estimates of Chinese and Russian linguists, the phraseology of the military sphere of the Chinese language has not been adequately researched, a large number of contentious issues related to its translation and interpretation into Russian remain relevant. Practically there are no specialized publications on this subject. All this causes the complexity of perception, learning and translation of the PUMS of the Chinese language.

As for military higher educational institutions, the main content for training military translation is based on printed and auditory texts. The selection of materials is made on topical issues from authoritative Chinese sources. Work with auditory texts is carried out at classes in language labs, where also multimedia courses and electronic textbooks on the Chinese language are used. The above conditions for training military translators in Chinese make it possible to effectively organize the process of studying PUMS, as well as the process of their practical use in professional activities.

At the present stage of development, we consider it reasonable to develop a separate educational module that reveals the main regularities in the functioning of the phraseology of military subjects. This module would be logical to be taught in the theoretical and practical disciplines concerning the Chinese language. This module should be provided with educational resources: textbooks, dictionaries, reference books, etc. It will also be logical to develop a special course called «Phraseology of the military sphere of the Chinese language» as a discipline of choice.

In conclusion, we want to say that the PUMS of the Chinese language play a significant role in the formation of the structural components of the professional competence of military translators in the Chinese language. Systematic mastering of Chinese military phraseology by future military translators is possible on the basis of the development of both linguistic and didactic aspects of phraseological units.

The use of PUMS in Chinese pursues its goal — it should be a certain communicative effect due to the imagery, brevity, depth of this linguistic phenomenon.

The use of PUMS in Chinese pursues its goal — it should be a certain communicative effect due to the imagery, brevity, depth of this linguistic phenomenon.