Nowadays digital electronics is based on the developments in microelectronics which is characterized by the entity of physical, design and engineering and sheet-oriented aspects. Microelectronics comprises the issues of research, development and the application principles of integrated circuits (IC) [1].

Integrated circuits are widely used in almost every sphere of modern life whether it is an industry sector or, for example, advertising sphere. All appliances we use every day function on the basis of integrated circuits. For instance, any musical equipment will not produce sound without audio programming chips whose task is to process audio sounds in certain sequence for the listeners to perceive music of proper quality. Furthermore, there exist different microchips for sound processing and each microchip is suitable for a certain sound hardware and obtains the technical criteria and specifications of its own.

The same situation is with memory chips. It is widely known that any technical equipment must store definite events and recordings, for example, digital cameras, digital video cameras and other recording devices, diverse computer hardware, etc. But each memory chip has its own storage parameter. Thus, there exist flash storage, permanent storage, combined memory, erasable programmable memory and electrically alterable memory as well as many other memory types which base on random access memory (RAM). Besides, memory chips can be both low-powered and superpower, which depends on the purposes the given microchip will be used for and the type of equipment it will be installed in. that is why nowadays there is a great variety of integrated circuits catering for every taste and need [2].

Now let us define integrated circuits. IC is a microelectronic device, seen as a single product, which usually contains a large number of intertwined components (capacitors, transistors, resistors, diodes) and which is made during the single technological cycle on one and the same supporting structure (substrate), and it carries out a definite function of data transformation [3].

The term IC (integrated circuit) implies uniting various components in structurally single devices. Components, which are the part of IC can’t be separated from it as stand-alone products and are called the elements of IC (integrated circuit elements). They obtain some features in comparison with the same structurally distinct units. Batch fabrication and planar technology are used for IC manufacturing. Batch fabrication means, first of all, that a great number of IC (bases are usually round) are being manufactured on a single base of PCB (printed circuit board) material; secondly, if technology allows, several bases are processed concurrently.

Early developments of the integrated circuit go back to 1949, when a German engineer Werner Jacobi filed a patent for an integrated-circuit-like semiconductor amplifying device. It represented five transistors on a common substrate in a 3-stage amplifier arrangement. The idea of the integrated circuit was conceived by Geoffrey Dummer, who was a radar scientist and worked for the Royal Radar Establishment. He presented this idea to the public in 1952 and gave many workshops to propagate his ideas, and attempted to build such a circuit in 1956 but failed.

A precursor idea to the IC was to create small ceramic squares (wafers), each containing a single miniaturized component. Components could then be integrated and wired into a bidimensional or tridimensional compact grid. This idea, which seemed very promising in 1957, was proposed by Jack Kilby and led to the short-lived Micromodule Program. However, as the project was growing in momentum, Kilby came up with a new, revolutionary design: the IC. Kilby won the 2000 Nobel Prize in Physics for his part in the invention of the integrated circuit. His work was named an IEEE Milestonein 2009.

Half a year after Kilby, Robert Noyce developed his own idea of an integrated circuit that solved many practical problems Kilby's was not able to do. Noyce suggested the design made of silicon, whereas Kilby's chip was made of germanium [4].

Integrated circuits (IC) form the primary base of modern processing and data transmission units. Since the time they were invented ICs have been constantly developing and becoming more sophisticated.

All IC types are being practically applied.

The development of integrated circuits technology has led to the creation of SSI circuits. In the form of SSI circuits, such circuits as low-bit registers, counter registers, adders, encoders, multiplexers, etc. are being manufactured. The nomenclature of the SSI circuits must be broader and more diverse, while their versatility is being reduced. Integrated circuits began to be implemented into consumer products and a typical application was FM inter-carrier sound processing in television receivers.

MSI circuits developed in the late 1960s maintain simple logical transformations and are versatile — even with the help of a single type of logical component it’s possible to construct any digital device. In comparison with SSI they were more economically attractive while they cost less, required less assembly work and had some other advantages.

A microprocessor can execute instructions which are the part of its instructions system. Changing the sequence of instructions (a program) various tasks can be performed on one and the same chip. That is, in this case the structure of the device is not related to the nature of the problem being solved. It allows IC microprocessors to be mass produced and have a reduced cost. The drawback of microprocessor-based devices is sequential processing of information, connected with sequential execution of a large number of individual actions, which correspond to commands, and it may not provide the required performance.

By technological characteristics ICs are divided into the following types:

Film integrated circuits contain elements and interelements junctions made on the surface of insulating base. Thick film circuits are widely used in the automotive industry, for instance in mixture of fuel/air, pressure sensors, engine and gearbox controls, sensor for releasing airbags.

By the purpose of function ICs can be classified into these types:

Digital integrated circuits can contain from one to millions of logic gates, flip-flops, multiplexers, and other circuits in a few square millimeters. The small size of these circuits allows high speed, low power dissipation, and reduced manufacturing cost compared with board-level integration. These digital ICs (typically microprocessors, DSPs, and microcontrollers) function with the use of binary mathematics to process «one» and «zero» signals [2].

ICs can also combine analog and digital circuits on a single chip. Such mixed-signal circuits result in smaller size and lower cost, but must carefully account for signal interference.

On the basis of applications ICs are of two types namely:

Linear ICs are used in cases when the relationship between the input and output of a circuit is linear. An important application of linear IC is the operational amplifier commonly referred to as op-amp.

When the circuit is either in on-state or off-state and it is not in between the two, the circuit is called a digital circuit. ICs used in such circuits are called digital ICs. They find wide applications in computers and logic circuits. 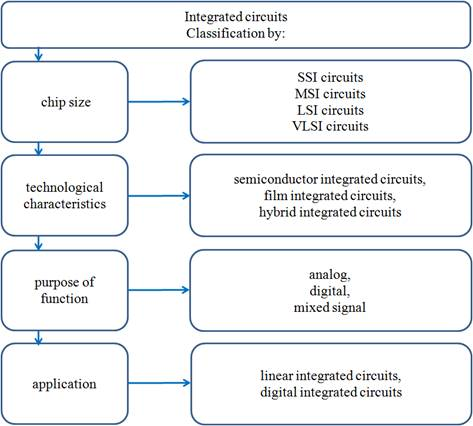 Nowadays, an IC that has the size of a fingernail consists of more than a million transistors and other discrete components embedded into it. This very characteristic has made integrated circuits be widely used in all spheres of life. The invention of integrated circuits revolutionized the use of computers. Due to its small dimension, low cost, and very high reliability even the common man is familiar with its applications like smart phones and laptops [5].