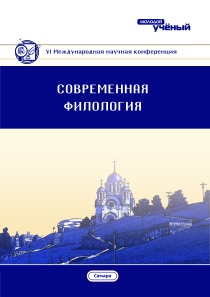 Word order plays an important role in the expression of mother tongue. For creation of the sentence are used specific rules a sequence of components of the statements characterizing one or another language. For a long time the problem of the syntactic typology of the language, and, in particular, the typology of word order was ignored. A dominant role in the description of the grammar was given to the study of the morphological features of the language. The first works devoted to the typology of word order began to appear relatively recently (in the first half of the XX century). Founders of research in the field of linguistics are V.Shmidta, L.Tenera, J. Greenberg, as well as their followers A. A. Holodovicha, V. M. Alpatova, Yu.V.Rozhdestvenskogo and many others. There are different spheres with different rules of word order in the literary language. Written prose speech has very strict rules; word order is freer in poetic speech. A considerable degree of freedom in the arrangement of words is characteristic of colloquial speech. The features of the word order of spoken language are reflected in written language as a means of stylization. The differences in the rules of word arrangement in the above-mentioned fields are associated with the various functions of word order. The main function of word order in written prose speech is the implementation of specific communicative objectives, or actual division of the sentence. For poetic and colloquial speech, the expression of this function by means of word order is less important; so here the order of words has more freedom compared to writing prose speech. Depending on the communicative goals pursued by the speaker, the same sentence can acquire different meanings. Communicative goal is the desire of the speaker to emphasize the aspect of the content of the sentence, which is significant in this context or in the speech situation.

2) Expression of a lexical subject and lexical predicate;

In some cases the word order can perform several functions at the same time, but one of these functions moves forward the forefront. It should be noted that the word order usually emphasizes the fact of communication between words making the sentence. The following function of a word order is the expression of a lexical subject and lexical predicate. As A. I. Smirnitsky specifies, “in speech practice of people it is necessary and very important to express not only the fact and the nature of communication between words, but also and the direction of this communication.” Many scientists claim that expression of a lexical subject and lexical predicate plays less importance then the grammatical relations between words as in the speech the most essential is establishment of nature of communication, but not his directions. Therefore if the word order serves for expression of character of grammatical link, the direction of this communication can either partially be expressed, or not be expressed in general. For expression of a lexical subject and a lexical predicate in modern English is used freedom of placement of words which remains after all grammatical elations have been expressed. The last function of a word order is expressional-stylistic. This function is that sometimes in the speech it is necessary to select this or that word thus to point out his importance in the sentence [1, p. 50–55].

For Spanish of the most general it is necessary to consider a tendency to expression of a subject as a subject phrase, and rhemes — group of a predicate. Stylistic function of a word order is a first characteristic of all informal and poetic conversation and differs in an emphatic word order. In Spanish numerous cases of inversion of a direct object are noted. Book language allows a final position of a verb predicate and its inversion concerning a subject.

The problem of word order in a sentence (also the problem of inversion) is studied by linguists even from the moment of origin of rhetoric and this dilemma remains urgent until now. At first the so-called “standard” word order was just fixed, then grammar has begun to consider communications between sentence parts, namely syntactic links of sentence parts, and later the stylistic began to study deviations from the standard word order and to define their functions in a discourse.

Inversion is the stylistic syntactic reception of reverse word order. Some changes of a word order change the syntactic relation and with them and all sense of the sentence, others combine grammatical and expressional functions. The general stylistic function usually comes to light from wider context then the sentence. Stylistic function of inversion sometimes cannot be revealed only by the mutual provision of parts of the sentence though this mutual provision of parts prompts a special shade of value of his statement.

In English each sentence part, as we know, has a usual place determined his syntactic expression, communications with other words and type of a sentence. It is interesting to note that the main word order in the English sentence: a subject — a verb — an object, has developed under the influence of need of establishment of communication between separate sentences in the narration “known” of earlier told and it established connection between sentences. Thus, there was historically a firm word order of the English sentences. It should be noted that great grammatical loading of the word order conducts to the fact that possibilities of usage of the word order, not for the grammatical purposes in English, is considerably limited [3, p. 74–77].

Structure of a simple sentence in Spanish as well as in many other languages is the same: subject, verb, object. In Spanish almost free word order is subordinated to actual vision: the order of submission of information on degree of importance prevails over a sequence of a grammatical basis, the most communicatively powerful word, as a rule, is in the end [2, p. 99–101].

Both languages are considered to be languages with the basic structure of SVO, however Spanish differs in bigger degree of freedom in following of sentence parts in comparison with English. The main function of a word order in English is grammatical whereas Spanish word order serves, first of all, as expression of communicative structure.

The main difference of a sequence of elements in Spanish by comparison to English is the subject rhematisation in simple not extended sentences which is expressed in his transferring to a final position, and in extended sentences — a possibility of transfer of addition in a position before a verb predicate or before the subject-rheme (new) expressed by a noun. Similar options of a word order are extremely rare in English.

The comparative analysis of examples from the Spanish and English languages shows:

1) In the English language indefinite article serves as an additional tool of marking the subject theme standing at the end of the sentence, for example in the scenic speech: Enters an old woman.

2) In the Spanish language the final subject in a sentence with similar structure may be preceded by the definite article, since the determining factor in the order of subject and predicate which is isolated from the context of the statements may be semantic of the verb: Llegó la enfermera [2, p. 33–40].

Inversion in modern English, thus, is potentially possible realization. Poetic works contain the bigger quantity of inversion, than the prosaic work, though any types of inversion appear both in prosaic, and in poetic works. However requirements of a rhythm and a rhyme can cause inversion in certain cases. In these cases inversion bears special function — ritmiko-emphatichesky. In original art work use of inversion is always motivated by the statement purpose. This purpose of the statement can be combined in the poetic work with certain requirements of the rhythmic organization of a verse. In prose inversion quite often gives special rhythmic sounding to the sentence. However, unlike poetic works, in prose the rhythm does not cause inversion and the inversion, motivated with the statement purpose, can give a rhythm to the sentence. In modern literary English inversion has stylistic function of a selection of one of the members of the statements in logical terms, or the allocation of statements in an emotional plan. As a rule, in modern English, inverted word order, which pursues the stylistic goal is a heritage of the written type of speech [1, p. 66].

In Spanish, inversion of word-formation process in the framework of the model “subject — predicate” led to its decomposition of two semantically individual constructions. The newly emerged structures do not differ from any other model. The development of language violates the hierarchical relationships between words. The problem of word order is complicated by the fact that the noun, as a result of changes in their semantic structure, can combine the values, some of which are primary, and the other should be considered as derivatives. Grammar of the Spanish language is considered more complex than English because of the more complex paradigms of different parts of speech, especially verbs. Despite this, free word order is very easy to learn. Spanish words in a sentence can stand in any order [5, p. 38].

Inversion of the subject in the role of “new” was recorded in the extended Spanish sentences with the structure SVO, for example:

Who wrote the book?

The teacher wrote the book.

Proceeding from all above mentioned, we can conclude that the word order is the basis for the construction of a sentence, which requires a more thorough investigation, and a violation of a well-established word order is often caused by the aspiration of the author to allocate this or that moment in the sentence. The fixed word order in English is explained by the fact that there is a very small amount of grammatical terminations and word-formation suffixes and function of words in the sentence is defined by its place in the sentence. However, the word order can sometimes have an indistinctly established character.

Foreign linguistic science of the last decades is characterized by the rise of interests in the study of word order as the main means of communicative structures expression in the Spanish language. Most of the researches describe a comprehensive approach to the studied problem: attempts to describe the peculiarities of words connected with lexical semantics of verb-predicates. It should be noted that the variety of national variants of the Spanish language to be studied from this point of view: (from Spanish and its versions in Spain and numerous variations of the Spanish language spoken in Latin America.)

Inversion, mainly grammatical, is used when there is a question, also inversion appears when the words representing the most essential part of a predicate in the semantic relation move forward. In this case inversion reaches emotionality of the statement.

Comparison of a word order as one of the main means of expression communicatively important word is represented prospectively to the Spanish — English bilingual. The ability to choose the necessary language means the realization of the purpose of the statement and represented extremely important as it is connected with increase in pragmatically competence of nominative speaking language.