Formation of pronunciation skills in teaching Russian in the national school 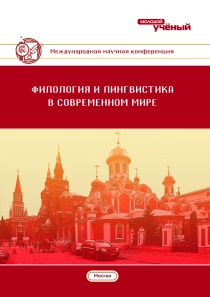 Formation of pronunciation skills in teaching Russian in the national school is a process inextricably linked with the formation of listening skills. These two processes, which arise and develop in parallel, have their own specific features and linguodidactic problems.

Practice shows that students, «possessing the stable skills of listening and pronouncing the sounds of their native language, adjust these patterns to their perception and reproduction of unusual sounds of someone else's speech».

The work on correct pronunciation without taking into account the peculiarities of perception of the sounds of the speech being studied is doomed to failure, at least, to a long and uneconomical way to the desired result, for «the phonetic system of the native language affects so much the perception of the sounds of someone else's speech that in most cases Incorrect are already those auditory images that the students try to translate into their pronunciation».

The introduction of sound-letter units at the initial stage, as well as the sound implementation of functionally important units of language on advanced, must necessarily be associated with the development of adequate auditory perception, with the essential distinction of all functionally significant units by ear, in other words, with the well-known phonology of speech hearing. The pedagogical practice of the teacher of the Russian language in the national school is exemplified by auditory anomalies: in distinguish between hard and soft, sonorous and deaf, likening u, f, n, c, etc. Cases of nondiscrimination of sounds, adjustment of sound incarnations of functionally significant Units of the Russian language to the sounds of the native are problems of universal, common to all national schools. Changes in different schools only fill their capacity, the concrete material content, the problem, like that, remains. Hence — the unlawful assimilation of the perception of speech in the language studied by the perception of speech in the native language.

Both in practical manuals and textbooks, and in scientific and methodical research, mainly articulatory problems are presented. The acoustic aspect remains on the sidelines.

A Russian language teacher at a national school should approach the development of listening skills to solve articulatory problems as seriously and creatively as possible. So, for example, the members of the class of voiced — deaf, hard — soft consonant pairs are joined by units that are minimally different from each other. To the acoustic characteristics of a firmly articulated consonant, only one element is added-softness, and this difference in one element differs from each other all the units entering into pairs. On the group of hard — soft consonants, presented as a single object, students must learn to hear softness. In the same way stands out voiced (or deafness, depending on what quality of consonants to take as the original).

The acoustic characteristic is transformed into an articulatory skill gradually, even if it is «audible» for the student.

— does not depend on the fact that one or another foreigner is not able to pronounce a particular sound, but rather from the fact that he incorrectly judges this sound. And this misconception about the sound of a foreign language is due to the difference between phonological structures of foreign and native languages».

When developing the acoustical-articulatory skills of distinguishing the sounds of the Russian language, it is appropriate to openly compare the subgroups of consonants of Russian and national languages.

Subgroups of consonants of the national language, identical to the subgroups of the Russian language (for example, due to the voiced voicelessness), are a convenient methodological object for comparing filling, detecting special pairs or pairs of pairs in the language being studied, and for training their perception by hearing and articulation. In this case, acoustic-articulatory problems, of course, are not particularly acute; since the main thing — the ability to articulate voiced-deafness — is learned and transferred to sound (adding depth or voicelessness) is a relatively simple task.

A much more complex linguodidactic task is the acoustical-articulatory problems of subsystems of consonants that have no analogues in the national language. So, the assimilation of Russian hard — soft consonants by students, in their native language, this difference is not functional, presents great difficulties. Here, it is methodologically expedient to compare the subsystem of consonants of the native language of students whose members differ in a different differential sign. The result is not the individual sounds of the two languages, but the differential attributes that have functional significance in these languages. In this case, an open comparison of two languages ​​with analysis and orthoepical exercises seems to be appropriate. «Listening» to one's own language, the ability to see in the pairs of subsystems of consonants what distinguishes between those entering into Their units, undoubtedly, work for mastering the Russian language, for understanding hardness-softness as an educational object and an independent educational unit. Such detail is necessary.

The students begin to understand (and the teacher should help them in this), that in Russian hardness-softness is a distinctive feature for groups of consonants. They concentrate their efforts on distinguishing between hard and soft concordant and achieve the desired result in the assimilation of their articulation. The methodological problems of acoustic phonetics extend not only to the articulation of individual sound units, but also to their compatibility. The ear familiar to certain sound combinations treats in its own way both combinations of consonants and vowels, as well as the syllabic structures of the studied language as a whole (for example, inability to hear the combinations of consonants in general, fitting these combinations to groups that occur in their native language).

In the selected Educational phonetic-orthoepical minimum, anomalies of this nature are provided, a dictionary of consonant groups is composed (on the material of a lexical mini-mum), questions of the structure of the syllable, and the compatibility of sounds within syllables are singled out. To fill in with concrete material with which the teacher of Russian at the national school faces every day. Acoustic stereotypes of the native language cause articulatory abnormalities, because in the perception of speech there is a powerful mechanism of anticipation. It works by receiving a certain speech signal in accordance with the norms of the native language, and then the students «hear in their own way» even the repeatedly repeated speech extract. The student's speech is controlled by the pronounced mechanisms of the native language and after he learns to correctly hear the speech material. But the work on listening will lay the foundations for correct pronunciation, and it, in turn, will correct the listening. The acoustical problems of teaching correct pronunciation in the Russian language textbooks for the national Schools can only be taken into account in general terms. A very large part of this work depends on the creative activity of the teacher.

It is necessary for him to constantly sharpen the attention of those who are learning on those articulatory features that do not catch the student's hearing, to emphasize that seemingly insignificant and therefore not replicating additions to conventional articulation have a functional meaning in the studied language. This circumstance was noted by L. V. Shcherba: «It must be remembered that the pupil's ear is deaf to foreign subtleties, and only by emphasizing these subtleties one can attract the attention of students to them and cause imitation». The relationship between acoustic and articulatory problems can be shown in all the teaching material on phonetics. The main thing is to take into account the necessity of working out an adequate perception of speech, remembering that «auditory, speech and visual sensations, with the leading role of auditory sensations, constitute the first stage of perception of the sounding speech». In favor of the importance of taking into account the acoustic factor in practical work, also the conclusions of Polivanova E. D.: «The inability to differentiate two phonemes presents more difficulties in school instruction than the inability to articulate a certain sound of the language being studied. These are the facts. The practical conclusion that comes out of them is quite simple: we need mainly acoustic exercises aimed at accustoming ourselves to hearing and distinguishing sounds... «And another:"... acoustic exercises should take at least, if not more time than articulatory exercises... «Thus, the two-sidedness of the speech act and the primacy of the auditory sensation in relation to the articulatory note are noted in the works on the physiology of sounds, according to linguistics and methodology. The skill to listen and hear lays the foundation of the correct articulation. In contrast to the methodology of teaching the Russian language as a native language, in a national school, groups of consonants are educational orthoepic units. If the very possibility of a combination of consonants is excluded for the native language of students, then it is necessary to emphasize this peculiarity of the studied language. If the consonant combinations in their native language are fundamentally permissible, then the methodical efforts are directed to the orthoepic practice of assimilating the articulation of specific consonant groups in the studied Russian vocabulary.

The Russian language syllable thus appears through the prism of some national languages ​​as a specific structure allowing certain combinations Initial and final consonants. The acoustic-articulatory problem of the Russian syllabic structure is the formation of the ability to perceive and reproduce the initial Combinations of consonants (as well as a combination of consonants within the boundaries of the phonetic syllable) as «clean», without inserting vowels, and articulate the pure consonant outcome of the word. The practice of teaching the Russian language in the national school raises the problem of selecting the basic phonetic- orthoepic educational unit, Language phenomena and orthoepic skills are practiced. Impossible to build all the phonetic-orphoepic work in the school within the boundaries of significant units — words, phrases, sentences. It is reasonable to abandon the syllabic technique that still has circulation. On the syllable as a learning object it is difficult to concentrate the student's attention, since a single syllable that does not correspond to an independent meaning and is perceived as a meaningless set of sounds is inferior to an independent word. Like the minimal unit within the boundaries of which the basic phonetic and phonological laws of language, syllables, of course, are a necessary training unit, but from didactic considerations it is convenient to choose a monosyllabic word from syllabic structures. In this case, the structure of the educational unit is extremely simple and analogous to the structure of a single syllable.