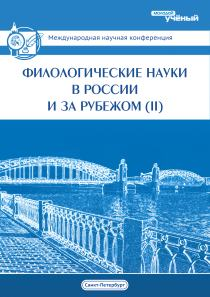 The successful implementation of simultaneous interpretation depends on some psychological mechanisms: switching from the source language into the target language, the mechanisms of probabilistic forecasting and predictive synthesis, mechanisms of compression and decompression, and mechanism of synchronization.

J. Miller describes this mechanism the following way: «The listener begins with the assumption of a signal at the input. On the basis of this assumption he generates an internal signal to be compared with the perceived one» [2].

In addition to the term «probabilistic forecasting» in many works are also used such terms as «anticipation», «prediction», «forecast». All of these concepts are connected by the principle of anticipatory reflection of reality. Probabilistic forecasting has a variety of forms as a psychological phenomenon: it acts as a regulation of mental processes (perception, memory, thinking) and provides a kind of functional relationship between them.

Probabilistic forecasting covers a wide range of phenomena and situations of human activities ranging from the prediction of external events, the results of his actions, and estimation of the expected results [1, c.4–5].

However, there are still aspects of probabilistic forecasting mechanism that need to be clarified, in particular, what factors affect the formation of when semantic hypothesis in the mind of an interpreter. In our opinion, these are the reference points in the incoming speech material which play a significant role in prediction during interpretation.

The following are examples show how probabilistic forecasting mechanism is used in the process of simultaneous interpretation:

Spekaer: Today, I want to make the case for optimism — for confidence in our future. We can overcome these problems but we do need a change of direction. Huge deficits don’t just fall out of the sky.

Speaker: Either way, it is Germany that dictates European policy because at times of crisis the creditors are in the driver’s seat.

The interpreter successfully predicts the word «кризис» and an idiom «кредиторырулят», which the speaker uses to tell that during the crisis «creditors are at the driver’s seat». In the second case, the translator has chosen a more official synonym of the word «рулить» and uses «управлять».

Speaker: The boom period culminated with the Maastricht Treaty and the introduction of the euro.

In this sentence the interpreter predicted the end of the sentence due to his background knowledge about the history of the European Union which was established on the basis of the Maastricht Treaty, the result of which later was the introduction of a new currency — the euro.

Interpreters must possess the following professional skills necessary for the realization of probabilistic forecasting mechanism:

1)                 the ability to predict the content (beginning, middle, end) of the audiotext by title, keywords, semantic parts, fragments of messages, the plan, the thesis basing on professional experience and context;

2)                 the ability to memorize and retain in memory the perceived information, and then use it in the future professional activity;

8)                 the ability to analyze the information on the basis of past experience, learning and professional context.

In conclusion, the interpreter must almost perfectly know the compatibility of lexical units of foreign and target languages. The creation of such associative links in the interpreter’s memory will dramatically increase the level of prediction and contribute to the implementation of the process of simultaneous interpretation.