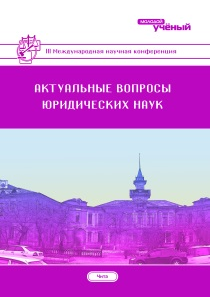 The article explains the terms of legal state, civil society, legal culture and etc. Moreover, there are some facts about Uzbekistan and its legal mechanisms to achieve high legal culture of youth. The article proves that the primary tasks of Uzbek government involved in achieving legal literacy and a high level of legal awareness have been defined, with the aim of establishing a comprehensive, permanent system for the development of a legal culture.

Legal state is currently considered one of the supporting ideas many states try to follow. It is a “constitutional state” in which the exercise of governmental power is constrained by the law. [1] In a legal state, the power of the state is limited in order to protect citizens from the arbitrary exercise of authority. The citizens share legally based civil liberties and can use the courts. A country cannot be a liberal democracy without being a legal state.

The most important principles of the legal state are:

‒ The state is based on the supremacy of national constitution and exercises coercion and guarantees the safety and constitutional rights of its citizens;

‒ Civil society is an equal partner to the state;

‒ Separation of powers, with the executive, legislative, and judiciary branches of government limiting one another's power and providing for checks and balances;

‒ The judicature and the executive are bound by law (not acting against the law), and the legislature is bound by constitutional principles;

‒ Both the legislature and democracy itself are bound by elementary constitutional rights and principles;

‒ Transparency of state acts and the requirement of providing a reason for all state acts;

‒ Review of state decisions and state acts by independent organs, including an appeal process;

‒ Hierarchy of laws and the requirement of clarity and definiteness;

‒ Principle of the proportionality of state action;

‒ Monopoly of the legitimate use of force. [2]

A well-developed legal culture is a crucial prerequisite for building a legal state. Promoting and achieving a high level of legal awareness among the members of society instills respect for the principles of lawfulness, the equality of all before the law, the protection of human rights and interests, and the efficacy of the law.

Sometimes the term civil society is used in the more general sense of “the elements such as freedom of speech, an independent judiciary, etc., that make up a democratic society”. [5] Especially in the discussions among thinkers of Eastern and Central Europe, civil society is seen also as a concept of civic values.

One of the main requirements for building the democratic, legal state and open civil society is high level of legal culture of people. Increasing and succeeding the high degree of legal culture of people as a system imagination of law, ideas about regulations of social relations, ensures the obeying the principals of rule of law, equality of all in front of the law, protection of rights and interests of people and enforcement of law.

According to Csaba Varga “The term ‘legal cultures’ stands for an operative and creative contribution, through social activity rooted in underlying social culture, to express how people experience legal phenomenon, how and into what they form it through their co-operation, how in what way they conceptualise it, an in what spritit, frame and purpose they make it the subject of theoretical representation and information.” [6]

Uzbekistan is a unitary, constitutional, presidential republic, comprising twelve provinces, one autonomous republic and a capital city. The Constitution of the Republic of Uzbekistan asserts that “democracy in the Republic of Uzbekistan shall be based upon common human principles, according to which the highest value shall be the human being, his life, freedom, honour, dignity and other inalienable rights.”

The official position is summarised in a memorandum “The measures taken by the government of the Republic of Uzbekistan in the field of providing and encouraging human rights” [7] and amounts to the following: the government does everything that is in its power to protect and to guarantee the human rights of Uzbekistan's citizens. Uzbekistan continuously improves its laws and institutions in order to create a more humane society. Over 300 laws regulating the rights and basic freedoms of the people have been passed by the parliament.

In Uzbekistan, legal mechanisms to achieve high legal culture of society across the country are developed and improving, where government agencies, educational institutions, national centers for human rights and civil society institutions are actively taking part.

In the framework of the reforms Uzbekistan has consistently implemented the principle «From strong state — to strong civil society», whose essence is increasing role of citizens in socio-political life, further development of the entire system of institutions of civil society and its harmonious integration into the process of governmental administration.

One of the key elements of development strategy of Uzbekistan for medium and long-term perspective remains Concept of further deepening of democratic reforms and formation of civil society, which was adopted on the initiative of the first President of Uzbekistan Islam Karimov.

In particular, the adoption of laws «On social partnership», «On transparency of public authorities and management» were an important step in improving the socio-political, social and economic activity of citizens, as well as the strengthening of public control over the executive authority.

The future of Uzbekistan directly depends on Uzbek youth, their all-round, harmonious development, implementing by it into practice of their knowledge and aspirations. From the first years of independence in Uzbekistan, great attention has been paid to the comprehensive support of youth. Today, the leadership of the country has created all necessary conditions for the realization of the goals and aspirations of the younger generation, in a word, all opportunities are open before them.

That’s why a special role in this area is given to youth organizations. Developing the feeling of patriotism, citizenship, tolerance and peace among children, as well as formation of child's legal awareness and legal culture are determined as one of the main directions of the state policy in the sphere of protection of child’s rights. This demonstrates the importance of improving the legal culture of population at an early age that serves as a strong motivational basis for the formation of law-abiding behavior.

The promotion of civic engagement of young people deserves special attention, which is about 64 % of the population. Development of civil society is unimaginable without education. As Inglehart and Welzelsay say, “democracy is not simply the result of clever elite bargaining and constitutional engineering. It depends on deep-rooted orientations among the people themselves. These orientations motivate them to demand freedom and responsive government — and to act to ensure that the governing elites remain responsive to them. Genuine democracy is not simply a machine that, once set up, functions by itself. It depends on the people”. [8]

Along with educational institutions and government and law enforcement agencies, civil society institutions also play an important role in improving the legal culture of Uzbeks. There are currently in Uzbekistan a number of sizeable community organizations with extensive networks of local offices throughout the country that are engaged in targeted efforts to improve the legal culture of specific groups (such as young people, women, entrepreneurs, workers, and leaders and activists from non-governmental organizations). These include such organizations as the Council of the Federation of Trade Unions, the Federation of Consumer Protection Organizations, the Chamber of Commerce and Industry, the Kamolot youth movement, the Women’s Committee of Uzbekistan, the National Association of Non-Governmental Organizations and the Ecological Movement of Uzbekistan.

It should also be noted that raising the awareness of citizens about the legislation is one of the main tasks of counseling centers which setting up by self-governing bodies of citizens. Issues of the legal education, rising of legal culture, public awareness about the important social and political events in the country and in the world are actively covered by the mass media. 5 specialized magazines and about 40 newspapers on human rights themes are publishing in several thousand circulations.

Meanwhile, in the future it is necessary to develop criteria for evaluation of the level of legal culture of youth as a whole. Analysis of legal culture will help to draw attention to the gaps in its increase, to determine the quality of activities in this area, as well as the level of participation in these processes both government and civil society institutions, to develop proposals for further improvement of the work in this field.