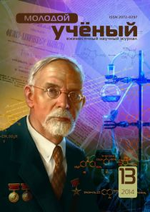 Overpopulation leads to poverty, overcrowding, pollution of air and water [1]. Together with increasing unemployment and food shortages, these factors will decrease the quality of life for billions of people [2]. Moreover, it is becoming evident that the climate changes are influenced by human industrial activities, which are proportional to the population size. The ongoing industrial development of the previously underdeveloped countries is precarious because environment protection measures are observed less rigorously there and, most importantly, because of the unplanned nature and large scale of this process, proportional to the population size. Countries with a high population growth are not likely to spontaneously fall below the replacement fertility level in the foreseeable future [3].

Ecological damage and depletion of non-renewable resources are proportional to the population size [4]. Food production cannot increase infinitely without soil depletion, desertification, deforestation and other forms of environmental damage [5]. Humankind can choose between reduction of the population growth by diminishing the birth rate and raising the death rate [6] by means of famine, epidemics or homicide, which were usual during the whole history. Even today, damage of a fragile infrastructure in some areas can result in severe shortages of fresh water and food. Humanity is in a demographic dead-end street [7], whereas no realistic solutions of the overpopulation-related problems have been proposed so far. Such solutions would require a revision of some ethical principles and propagation of new ones, in particular, that no population group, on a national or international scale, may obtain any advantages because of its numerical size and further growth. On the contrary, those who have had many children should logically live in more crowded conditions. Without procreative competition, different peoples would be more likely to live in peace and help each other. Importantly, there would be no need for any kind of discrimination because the equality principle would automatically affect populations with higher birth rates.

The most reliable method of birth control is sterilization. The last (or single) birth should be preferably accomplished by caesarean section. Although more costly, this procedure is associated with a lesser risk for the newborn and facilitates sterilization by resection of the fallopian tubes. Admittedly, the caesarean section as a form of delivery would be associated with more risks in areas with limited or no medical facilities. Vasectomy in men would be also efficient, especially in the populations, where overt or hidden polygamy is practiced. Sterilization can provide a solution to the controversies related to the economic migrations, which cause a growing opposition in more developed countries. If an economy needs foreign manpower, sterilization would be a desirable condition for a work and residence permit. A high-quality sterilization service could be provided by the countries receiving immigrants. Such measures would be more humane than economical sanctions against families with many children, which, to be efficient, must include e. g. denial of free education and medical care for the second or third child. The victims of such measures would be children themselves, who are not responsible for their parents’ unwillingness to apply contraception.

It can be argued that sterilization does not prevent sexually transmitted diseases and AIDS; however, these conditions may be regarded as self-inflicted as a result of negligent or immoral behavior, thus being in a sense a private matter. Admittedly, in relation to the sexually transmitted diseases and AIDS, if a women has been infected by her partner (which is not uncommon e. g. in sub-Saharan Africa), she should not be regarded negligent or immoral because of it. In any case, when children appear, it ceases to be private matter or an inherent human right, as the number of children in a family is of public concern. Furthermore it can be heard as objection that birth control and sterilization are unnatural. It should be noted that death from infectious, parasitic diseases and many forms of homicide are natural, while survival in the case of a perforated appendicitis is quite unnatural. In fact, it is the human civilization that is unnatural, and it is the civilization that can solve the problems of overpopulation and international conflicts.

High fertility was propagandized during the global conflicts and the Cold War to replenish military and manpower resources. Necessity of birth control has been obfuscated by conflicting national and global interests: population growth has been regarded as a tool helping to sovereignty and economic advance. Even today, there are appeals to increase the birth rate, accompanied by misinformation about allegedly severe complications of contraception and abortions. Global birth control by means of widespread sterilization requires investments and managerial efforts; all simpler and less expensive solutions would be however less humane. It is sometimes argued that the birth rates tend to decrease as living conditions improve. There is such tendency indeed but the population of more developed countries continues growing nonetheless due to the economic and other migration and enhanced birth rate amongst the immigrants. Finally, it should be stressed that there can be no religious objections against contraception and sterilization because they are not mentioned in religious texts, so implying neither disapproval nor prohibition.

Labor productivity is growing; few working people can provide means of subsistence for a large population [8], while unemployment is increasing. In the past, similar conditions were terminated by wars and pestilence. This has not happened long since, and we are waiting to see what happens, while the population is growing. However, there are many things to do. Great projects could be accomplished by a unified mankind: construction of irrigation facilities for drought-stricken lands; nuclear, solar, tidal and other power plants to reduce the consumption of fossil fuels, etc. Scientific research must be revitalized and purged of scientific misconduct [9]. These measures would create work for many people. Moreover, should the birth rate decline in the future, it means that the workforce is at its maximum today, which provides an opportunity to accomplish great projects. Not much is required for that: a globalised administration and English as the first or second language for everyone. Only by concentrating of authority within a powerful international executive, based in the most developed parts of the world, can the vicious circus of international competition and conflicts be broken and priorities for addressing overpopulation created. Accordingly, propaganda should popularize the image of hardworking people, which must become a pattern of identification for the youth [10].

Furthermore, in some southern and eastern Asian countries, the sex ratio has become skewed towards men, partly in consequence of gender-selective abortions [11–14]. In the People’s Republic of China, male-to-female ratio among the newborns was reported to be around 119:100 [12]. A similar phenomenon has been observed in India and among immigrants from Asia to Europe [11]. According to traditions, economic and social reasons, many families prefer to have sons, which is the cause of the increasing male-to-female ratio in the newborns, infanticide, abandonment of newborn girls, and neglect of daughters [12].

There were many campaigns in China since the 1940s, which have ended with nothing; and the ‘one child policy’ can be one of them [15]. Moreover, this policy can be a convenient background for eugenics, selection of strong men (fig. 2) etc. In future, the gender shifts might progress, considering advancing prenatal sex-testing technologies, their growing availability for the public, discrimination against the girl child and son preference in many countries [16]. Therefore, measures should be planned and taken globally by a powerful international executive. It is time to act now; otherwise it will be too late, the more so as the measures against overpopulation, ethnic and gender shifts would eventually result in worldwide stability and improvement of the quality of life. The predominance of males is more conspicuous in the lower socio-economic classes; and there is a concern that their marginalization may lead to antisocial behavior threatening societal stability. As the excess of men may cause insecurity, families are further motivated to have more sons for protection. Moreover, the relative excess of men may contribute to militarism and conflicts.

Son preference was reported also from Africa [17], where gender shifts are not yet prominent because of lesser availability of the prenatal gender testing. However, should fertility decline in future, the motivation to perform gender-selective abortions would become stronger because many families would try to have at least one boy to secure the patriarchal lineage [17]. It should be also mentioned that the population size and gender imbalance in some countries are probably underestimated because the migrants, who are predominantly males, can be overlooked by a census. Due to the international migrations, a regional excess of men causes global repercussions. A local outflow of men would further stimulate the gender-selective practices in their native countries. For young males in some regions, the damage has already been done, and the measures against gender imbalance in future newborns would not help them to find a female partner.

The following is the beneficial message and proposed solution at the same time: by concentrating authority in a powerful international executive based in the most developed parts of the world can the vicious circus of overpopulation, ethnicity- and gender-related shifts, of international competition and conflicts, be finally broken. In conclusion, the mankind needs to eliminate the motives for high fertility and the son preference, to protect and support childless elderly people, unwed mothers and families raising girls. 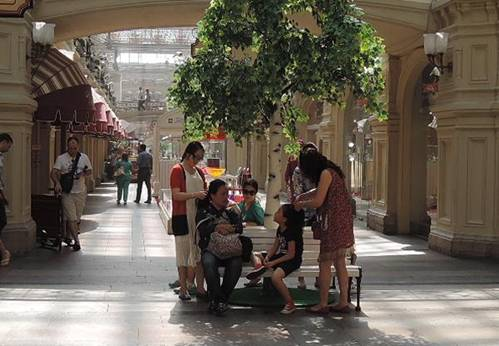 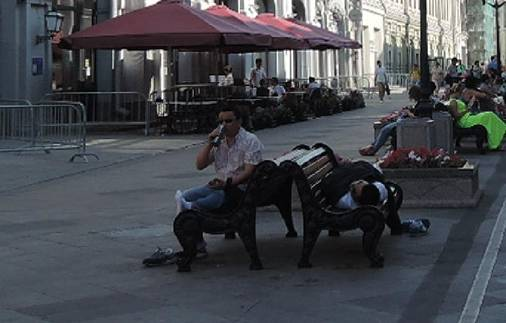 Fig. 2. Near the GUM. Beer drinking is prohibited in public places. Russian pensioners have sometimes trouble because of it. 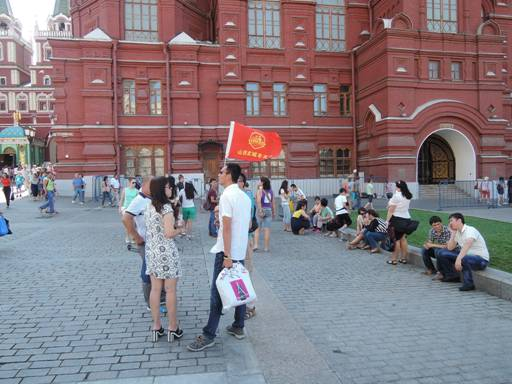 Fig. 3. Near the Red Square in Moscow