Commercial banks play important credit intermediates in the national financial system. The operation of commercial banks has a great influence on economic development. However, doing business on currency field makes commercial banks face up to a lot of risks, especially credit risk. Thus, effect, stability and safety in the commercial bank system’s operation is one of crucial requirements to any nations.

In over the world, Basel Committee on Banking Supervision (BCBS) was established in 1974 in Basel city — Switzerland by a group of Central banks and Supervising agencies. BCBS appeared after a number of the international monetary crises and banking markets crises and has made many discussions related to the international cooperation with the purpose of reducing gaps in the banking supervising operation as well as improving its quality. One achievement of BCBS’s activities is building and giving the norms to evaluate the levels of safety, effect of the banking operation which have displayed in The Basel Capital Accord (Basel) in oder to prevent commercial banks from bankruptcy, minimize risks that could threaten to the financial stability not only in each nation but also the whole world. Basel I was issued in 1996 with standards in the globalization trend so as to strengthen the stability of the international bank system, especially, while the credit risk has made negative impacts on banking operations and establish an equally international bank system to reduce unfair competitions among banks. To repair the restrictions of Basel I, on 26/06/2004, Basel II was officially issued. Beside the purposes given in Basel I, Basel II has oriented to speed up the acceptance of the tighter rules in risk management. Basel II has included three pillars. Pillar 1 has a number of capital regulations that combine with operating risk in the formula for Capital Adequacy Ratio (CAR) at 8 %; Pillar 2 involves in supervising excution and Pillar 3 consists of market disciplinary principles. To ensure the banking operation safely, not only require commercial banks maintain an full amount of capital, did BCBS give 25 basic principles that could supervise commercial banks effectively. Since its born and application, Basel I and Basel II have played important roles in the operation of commercial banks. A more detailed look at the practical experiences reaveals that inspite of bad influences of financial cirses on commercial banks’ operation all over the world, to commercial banks having applied Basel, they got a lot of advantages from these accords to prevent risks and guarantee their capital.

(Sources: Annual report in 2015 of these commercial banks)

Currently, Vietnam commercial banks have divided their loan porfolio into five loan groups according to the payment deadline. Whereas, Sub-standard loans, Doubtful loans, Loss loans have classified by the bad debt catergory. In addition, the regulation of provisions has given as a solution to compensate for loss due to credit risk.

In Vietnam, in 2012, there was a boom of the bad debt caused a high of credit risk as a consequence of stimulating loans for many previous ages since many loans decided based on the clients’s need instead of credit principles when the growth in shares of Vietnam commercial banks was out of controls. Above all, the compliance of the legal disciples has not been serious, many large loans have approved to invest cross under the direction of leaders or shareholders.

Therefore, SBV set up Circular No.02/2013/TT-NHNN on 21/01/2013 replacing Decision No.493/2005/QĐ-NHNN on 22/04/2005 with the strict rules of classifying loan groups. Furthermore, to improve the quality of the assets, Vietnam commercial banks have concentrated on controlling the quality of bad debts and excuting these. They have re-evaluated the quality of their assets, the capacity of taking back bad debts and the value of bad debts. On the other hand, Vietnam commercial banks have also checked, reassessed the quality of enterprise bond and other credit institutions bond investements. Based on that results, they would account, transfer, reduce the investment scales in enterprises in the fields which come to a lot of risky potentiality such as: real estate, fisheries. They have focused on raising the quality of traditional banking services, developing the modern banking services moderately through updating, applying the advantages of the high technology. Noticeably, following Circular No.02/2013/TT-NHNN and Circular No.09/2014/TT-NHNN, from 01/01/2015, Vietnam credit institutions have refered the debt classifying results of Vietnam Credit Information Centre (CIC) to each custumers to re-arrange the clients’ loan groups by the highest loan group if many different credit institutions made loans to them. 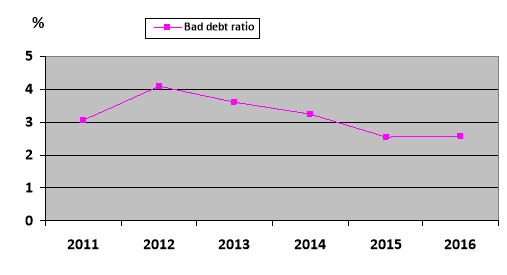 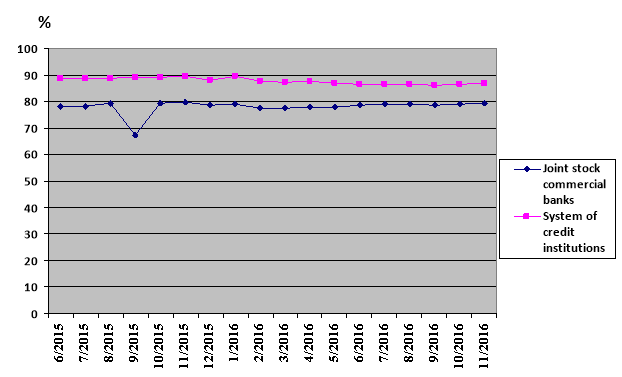 Admittedly, applying Basel II has made many positive impacts on the banking activities, however, Vietnam commercial banks have to face up to a lot of difficulties and restrictions to meet the requirements of the accord, namely:

– CAR of all Vietnam commercial banks has reached above 9 %. Nevertheless, this figure has not reflected fully the sufficient quantity of their capital. The CAR formulas in accordance with Circular No.13 and Circular No.36 have released many shortcomings. Its denominator given by SBV specifies only credit risk but without market risk, operation risk and not sufficiently mention to other factors as follows Basel II.

– Financial leveraged ratio has increased in recent years shows that the scale of the equity has declined as opposed to the total assets, specially at State commercial banks. Remarkably, from 2011 to 2015, the risk assets of these banks grew at average over 19,4 % per year, higher than at 15,43 % per year of the equity. Consequently, CAR dropped from 10,8 % to 9,42 % in 2001 and at the present nearly reaches the minimum 9 %.

– LDR and the Long-term, middle-term loans on short-term deposits of Vietnam commercial banks have been quite high in this peridod. Although Circular No.36 has loosen the latter up to 60 %, the high bad debt ratio connected to using a lot of deposits to make a number of loans. Hence, Circular No.06/2016/TT-NHNN on 27/5/2016 was issued by SBV has identified the process of decreasing that ratio at 50 % by 2017 and at 40 % by 2018 with the aim of controlling the system’s credit risk, liquidity risk.

Moreover, the compliance with financial market rules involved in publishing and clarifying information in the system of Vietnam commercial banks has showed a lot of shortcomings: there have been some data not be updated on public, the weak quality of accounting and financial information, etc.

In front of the urgent requirement of applying capital standards under Basel II in the banking operation and overcoming those given obstacles, each of Vietnam commercial banks and SBV could use some solutions overall as the following:

– Vietnam commercial banks are oblige to make regulations, process together the systems of internal risk management and supervision to meet inquiries of Basel II. The system of risk management should be created and run effectively from head offices to branches and transactions spots.

– Human resources have been considered as big difficulties, obstacles to Vietnam commercial banks due to the fact that the quality of human resources have not been equal, managers lack the experience and knowledge of management, specially, there has been a shortage of employers who used to experience the application of Basel II. To increase labour productivity, to attach employees and to manage risks are the basis to get the goals of firm revenue growth along with the supply of surpassing banking services.

Creating a safely, fairly and equally competitive business environment to the financial market in general and the banking market in particular has been one of the most important targets of SBV to meet the integrated requirement in this period. Therefore, the application of Basel II is the crucial mission to excute this aim. Nevertheless, the system of Vietnam commercial banks has been quite weak and the financial market in Vietnam has been inexperienced as compared to these of other developed countries that cause the application of Basel II to be pressure and challenges to many Vietnam commercial banks. Thus, in oder to ensure the process of Basel II application in the next period that need a great deal of effort and cooperation among Vietnam commercial banks and the mangagement, supervision of SBV.