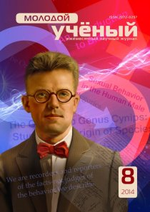 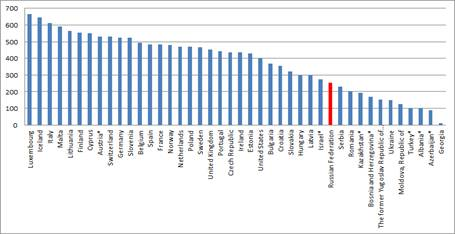 In the same time, the number of accidents and the number of victims in Russia are much higher than in countries with a high motorization level (Figure 2).

The high number of road traffic injuries in Russia is highly dependent on human factors: driver’s behaviour, the lack of preparedness, recklessness on the roads, drunk driving and drunken pedestrians, improper road safety of drivers and pedestrians and, in some cases — on the state of health of both of them.

Further there is some statistical information which will be important for the consideration the traffic safety problem in Russian Federation. 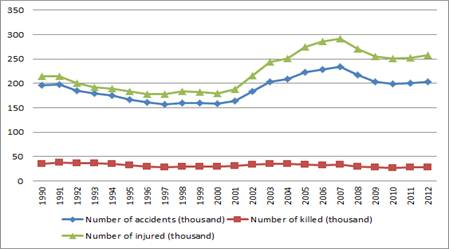 Figure 3. Time series of road crashes, deaths and injuries in the Russian Federation, 1990–2012 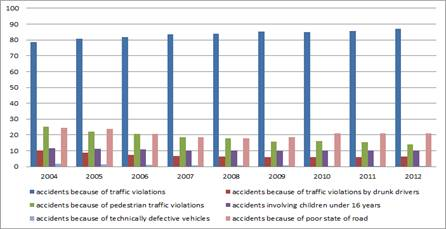 Figure 5. Causes of accidents in percentage, 2012 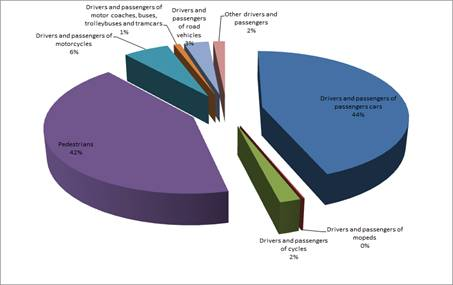 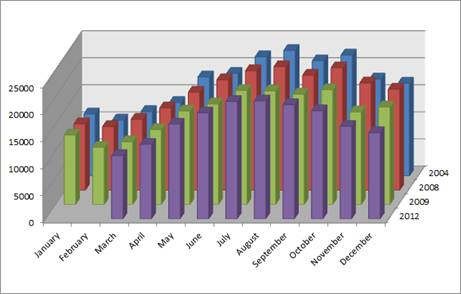 Figure 8. Number of road accidents by month and year 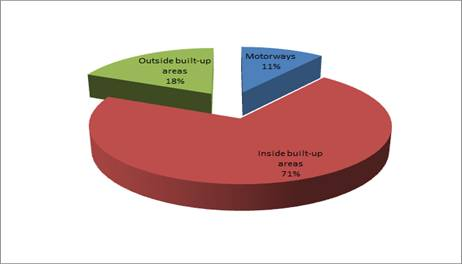 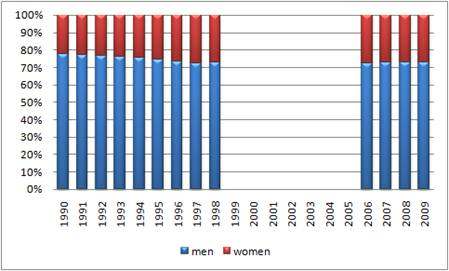 Figure 12. The percentage of dead men and women

For the data 1990–1998: World Health Organization regional office for Europe 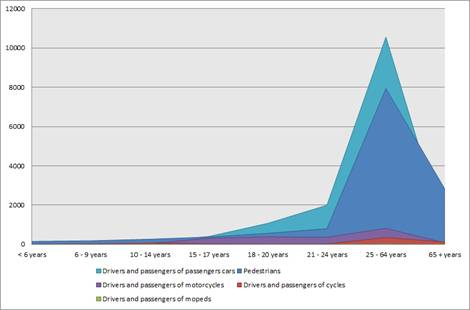 For the most general information the dynamics of major accidents rates since 1990 should be considered. According to the data from Statistical Yearbook of Russia (Figure 3), there have been continuous reductions in crashes, deaths and injuries between 1991 and 1997 coinciding with a period of economic decline.

According to the data showing on Figure 5:

Changes are likely related to an increase in penalties and the introduction of a new provision of law and regulations and more attention to the problem of road safety by the authorities.

Deaths by type of road user

Pedestrian deaths and deaths of drivers and passengers contribute respectively to over 33 % and 53 % of total deaths (Figure 6). Though the share of the total number of pedestrians killed in 2010 is high, it fell by 10 percent compared to 2004 (Figure 7).

Accidents by time of year and location

The highest number of accidents occurs from July to October (Figure 8).

The most “dangerous” days of the week are Thursday and Friday (Figure 9).

Most road traffic crashes occur in the period from 12.00 hours to 18.00 hours (Figure 10) and those with most serious consequences occur at night between midnight and 07:00 hours[1] (Road Safety Performance. National Peer Review: Russian Federation, 2006).

According to the data for 2009 the highest number of accidents occurs within cities, they account for over 70 % of all accidents (Figure 11).

Men are killed in road accidents more often than women — 70 % of people killed in accidents are men (Figure 12). The percentage ratio has not changed a lot from 1998 to 2006. And even there is no data for the period 1999–2005[2] it can be assumed there were no significant changes in the ratio.

The majority of deaths occur to the drivers and passengers of cars and pedestrians between ages from 25 to 64 years (figure 13).

These measures were positive:

3.            Today there are an official statistics on causes and number of accidents since 2004. Before that such kind of data did not exist or were only partially available. The availability of statistics makes it easier to evaluate the situation on the roads, to identify the causes of accidents and to take action more effectively.

An interesting feature of traffic in Russia is the fact that over the last two years a large number of drivers have installed digital video recorders (DVRs) in their cars. They become very popular in 2011 and in 2012. About 1 million recorders were sold. Records made by DVRs can serve as proof of innocence in the case of an accident, or might help when faced with unlawful actions of traffic police. Also, a video recorder in the car helps a driver to maintain within the traffic rules. This is due to the fact that in the event of an accident the record can prove innocence as well as guilt of the drivers involved.

Moreover since 2011 in many patrol cars DVRs are also installed. This change was made in order to reduce corruption on the roads. It means that cameras must record everything what is going on inside and outside of the car. Thus the possibility of offering and extortion bribes was minimized. And in the case of an accident there is a record of the event. However, the large number of DVRs in individual cars, and many of the reviews and the videos on the Internet testify that the system is not working well enough.

But DVRs are useful not only for individual drivers. In the middle of March 2013 Moscow government proposes to install DVRs in buses to capture traffic violators traveling by lane allocated for public transport.

The popularity and usefulness of DVRs on Russian roads, however, does not mean an increase in their use abroad, such as Europe. For instance, Austria banned the installation of video recorders in private cars, considering the use of such devices invasion of privacy. The offender will pay 10 thousand Euro of fine if installation of the DVR was unauthorized, if it is a reinstallation — 25 thousand Euro. In addition, the residents captured by the DVR can file a civil lawsuit in the amount of 20 thousand Euro. At the same time the Austrian newspaper «Kleine Zeitung» reported that the authorities of the municipality Graz officially allowed the installation of surveillance cameras in public transport to do a record of the events on the road.

1.       Most accidents occur due to non-compliance with traffic rules, and the main victims are the drivers, passengers of cars and pedestrians;

4.       Although the number of accidents and victims are still very high, there is a tendency of decline;

5.       Road safety problem has received more attention from the State: a federal program was implemented; the procedure for collecting data of the causes and consequences of an accident has changed and it provides a more detailed picture of what is happening on the roads;

6.       The presence of DVRs in private cars obliges drivers to a strict observance of the rules of the road. This is undoubtedly a positive component in terms of increasing traffic safety.