How space matters in geopolitical path

Several aspects of investigating space from position of geopolitical science are under consideration in mentioned article. It determined that in majority of geopolitically directed works category of «space» or spatial aspect is appearing as part and parcel of theoretically-methodological basics of research. Despite on point that category of «space» comes scientifically and used widely in theory and practices of various disciplines, usage of it in geopolitics requires concrete definition of this term. Authorial position consists in point, which shows that geopolitical space is represented as private case of geographical space. Besides concrete definition of geopolitical space process of analyzing its characteristics lets conduct distinct border, which is dividing concepts of «geopolitical space» and «territory». According to the following research the main purpose was to show how space matters in geopolitical path, how it could be recognized by scientific society.

Does the space appear as a simple emptiness, which is lying in base of everything? Or it seems as an emptiness between objects? Most of us consider ourselves that space is an emptiness where all processes are taking place, but according to science space is not just an emptiness and it is not just a simple interaction of particles of matter. The aspect of «space-time» is one of the crucial in geographical researches. The conception of «geographical space and time» is derivative from philosophical categories of «space» and «time», which are interpreted in wide range from objective reality. Materialistic dialectics emphasizes objective pattern of space and time and deny non-spatial and timeless reality (Shalnev V. A. and Talalakina A. A., 2011).

Geographical space — one of the most important concepts of geography and at the same time one of the most debatable. To start the research it’s necessary to determine with the notion of category «space», which also causes certain discussions. Further we are aiming on finding out features of geospace and its structure, noting such characteristics, which has meaning for political geography and geopolitics.

Basics of geospace in historical way

Spatial approach with through direction is passing through the history of geography and appears as main scientific treatment in its methodology. However a concept of geospace and of main parts as essence, dimension and connection with time have changed repeatedly. Together with that changes affect terminological apparatus of various geographical schools. Foreign geographers commonly used terms as ´space´, ´place´ and ´region´. For geographers of Soviet Union more traditional are ´territory´ or ´area´. Herewith territory and area often interprets as a synonym of term ´space´. Space for philosophers is a form of matter being, which is characterized by length, structural, coexistence and interaction of elements in all material systems. Time as an integral subject of space seems as a form of matter being, which is expressing duration of existence, sequence of change in modification and development processes in all material systems (Shalnev V. A. and Talalakina A. A., 2011).

Theory of relativity of Albert Einstein have uncovered inextricable connection between space and time as of unified form of matter being and also have established structures of world as space-time and cause-consequence. Geographical meaning of space without any philosophical component is mentioned as form of existence of various types of geographical objects and phenomena in limits of geographical shell — totality of relations between geographical objects, which are located on specific territory and are developing with time. Physical geographical space has its own features — seems as scope, therefore seems isolated. Physical space of Earth is represented by two constituents — aboveground and underground, which are focused on surface of Earth. Within its limits geographical objects are interacting and consequently organize a bunch of places, where processes of structuring of matter are taking place for an aim of making individual objects — geosystems, which could simple (river system), complex (natural landscape) and integral(territorial recreational systems).

As to opinion of Soviet Union’s scientist E. B. Alaev area within which impact of certain object is manifests itself is named as geographical field. Concerning to this presence of territory is considered required condition. Wherein for most of the geographical objects area could be constant just in certain line segment of time. In this way geographical space is seems as aggregate of following attributes: objects (geosystems), geographical field and area. And the output by E. B. Alaev is that territory occurs as a part of solid surface of Earth with inherent natural and anthropogenic properties and resources, square and two-dimensionality (Sharigin M. D. and Chupina L. B., 2013).

Important role in understanding in essence of geographical space is taken by evolutionary approach, which is aimed on explanation of main stages in formation of modern structure and its diversification. From position of concept of global evolution model of such space is considered as amount of universal evolution of natural process (Shalnev V. A. and Talalakina A. A., 2011). Quality jump of this evolution was made with the appearance of human and the formation of social structures. In its own way and structure geographical space is multi-object and multidimensional, constantly changing historical unity, which is characterized with dimension, structural, properties, coexistence and interaction between objects.

In this way real geographical actuality is complicated and framed — it has complex material substrate. Investigating such bunch of processes and phenomena seems hard, but it is possible in the presence of ideal model, which let us to consider objects of study as holistic composition. 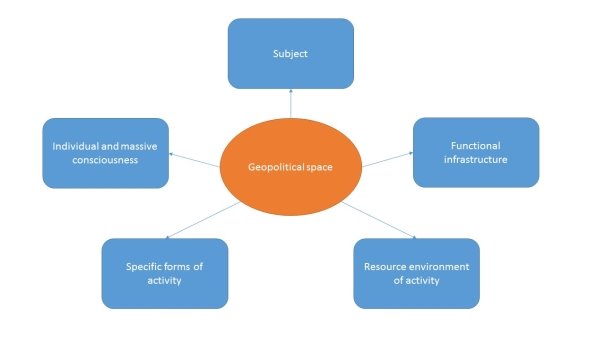 In modern geopolitical and other social conditions the main factor of the development of geopolitical space is based on totality of topological properties in the scale of geographical space, within the framework of which in certain circumstances could be given to physical space and also to natural, human, technological, infrastructural and ecological resources. Namely, specified features appears as a strategical reserve of geopolitical space and within is mentioned as a moving factor of global processes, which leads to new forms of geospatial organization (Volynchuk A. B. and Pestsov S. K., 2018).

Spatial relationships of society are presenting itself as a projection of numerous measurements on specific space, but also while being effected by various limits could be reflected on a structure of it. Consequently, geography of human is not representing itself as just an appendage of social sciences. It is not staying it aside of them, it is making up one of the edges of its numerous sides (Elatskov A. B., 2012).

Geographical space as an object of political geography and politics could be understood in two ways — in wide and narrow meanings. But interconnection of various types of space and concentric structure of geographical space — it is just one side of considered category. Not less meaningful is territorial structure and geographical relations in base.