Pregnancy and labor in patients with uterine fibroid 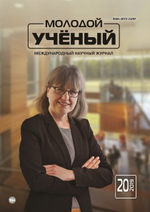 Uterine fibroid is benign monoclonal tumor which develops from smooth muscle cells of myometrium [1, p.7]. It is the most common benign pelvic tumor in women of reproductive age [5, p.56]. If pregnant woman has uterine fibroid, this creates risks for pregnancy and fetal development [3, p.74].

Purpose. We wanted to assess the features of pregnancy and labor in women with uterine fibroid.

Materials and methods. Aretrospective analysis of medical records was carried out in 61 patients diagnosed with uterine fibroid. All women were observed in the maternity department of the medical unit № 9 in Perm in 2015 year.

Number of abortions in history

Extragenital pathology was in 84 % (51 women) cases before pregnancy (tab.2).

Myomatous nodes are classified by size as small, medium and large. Half of the subjects — 49 % (26 women) — had medium-sized nodes.

Indications for emergency cesarean section is an obstetric pathology, such as:

– weakness of labor and the lack of effect of drugs to induce labor,

During cesarean section half of women (56 %) performed myomectomy and diagnosed with subserosal fibroid uterine and mixed types. Increased blood loss in women with myomectomy was in 42 % (10 women) of cases.

1) The proportion of women of late reproductive age was 57 % (35 women). This fact is important because the risk of uterine fibroid increases at this age [2, p.15].

4) Single uterine fibroid was diagnosed in 68 % of cases. Most common uterine fibroids were medium size — 49 %. The main localization of myomatous nodes was in the anterior uterine wall (57 % of cases).