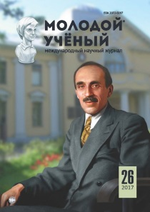 All the information potential is collected in libraries, and only there the user can find the qualitative information. The development of information and Internet technologies allowed libraries to organize their resources to create an electronic database of information resources for their providing with free access. Paper is devoted to the librarianship development in Uzbekistan.

From the first days of gaining independence, Uzbekistan began to build a free democratic state to ensure a decent and spiritually rich life for the people. The chosen path of development is based on taking into account the world experience, as well as the centuries-old national traditions, customs, traditional way of life and is aimed at the renewal and development of society and the state. During the 25 years of independence, positive changes took place in the country, which affected virtually all aspects of public, cultural and international life. Active and effective steps were taken to join the country in the world community, the successful implementation of which largely depends on the level of ensuring free access to information for all citizens of the Republic of Uzbekistan.

The Resolution of the President of the Republic of Uzbekistan “On the Organization of Information and Library Provision of the Population of the Republic» dated June 20, 2006 was sent to the development and improvement of information and telecommunication technologies in the librarianship. The decree is also aimed at improving the information and library provision of the population, but, which is especially important for the development of the librarianship, a decision has been taken to dramatically reform the library system of the republic. The Resolution defines fundamentally new positions and a vision of the library. It determined to name the libraries as information and library centers. The structural reorganization of the library system of the republic was carried out. Public libraries, which was subordinated to the Ministry of Culture and Sports (now the Ministry of Culture) was transferred under the control of the Center for Secondary Special and Vocational Education (CSSVE) and The Uzbek Agency for Communication and Informatization (UzACI, now the Ministry of the Development of Information Technologies and Communications of the Republic of Uzbekistan — MITC). 14 information and library centers in each region was created on the basis of the regional public libraries and was subordinated to the UzACI. Other small public libraries was merged to the information-resource centers of colleges of the CSSVE. Figure 1 shows the library network of Uzbekistan.

Reforming the library sphere of the republic caused the need to develop and adopt normative and legal documents regulating the activities of libraries, methodological recommendations for revising the basic forms and methods of library activities, moving from traditional forms of work to introducing and using new, more advanced and effective methods with using ICT. The new statuses and organizational charts of libraries were approved.

‒ the formation of a database for electronic resources, including the creation of electronic copies of printed publications, primarily having a spiritual, moral, cultural, historical, scientific and educational significance for the creative development of a spiritually rich and harmoniously developed personality;

‒ coordination of mutual use of information resources on the basis of the creation of a union catalog of information and library institutions and the organization of electronic document delivery service;

‒ further improvement of the system of training information library specialists for modern information and library technologies, retraining and upgrading their skills. 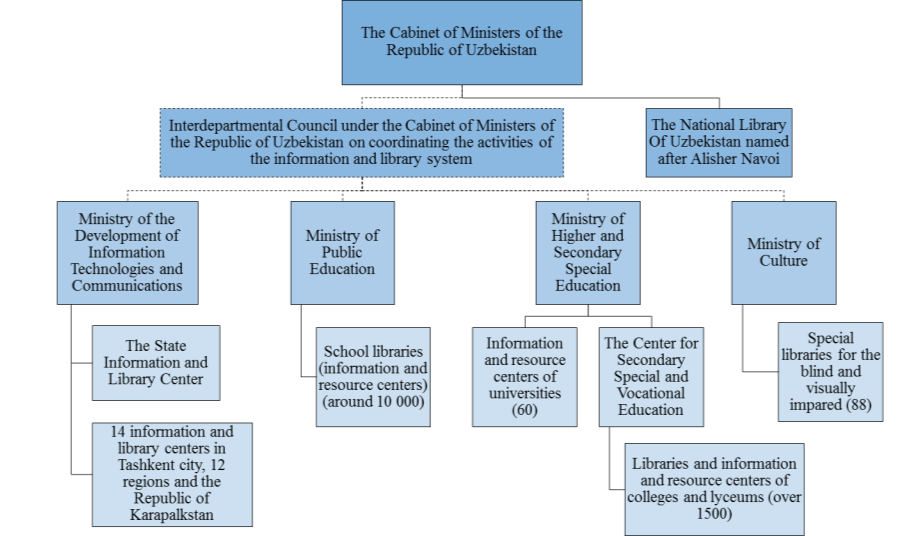 
In accordance with this resolution the Republican Center of the Union Catalog (RCUC) was created in the National Library of Uzbekistan. The objectives of the center is to form the database of the union catalog of the Republic of Uzbekistan by collecting the created bibliographic records from all libraries on the territory of the Republic.

Currently, there are 12 000 information and library institutions in the Republic of Uzbekistan that provide information services to users. The total literature fund is 90 million units of storage, including 5 million units in electronic version.

In the beginning of the 2000s the libraries used library information system called IRBIS which is produced in Russia. Now there are several national software (ARMAT, KADATA) is being used to automate libraries and create corporate library networks.

ARMAT is based on MARC21 and KADATA uses UZMARC national standard. ARMAT is more popular in educational institutions like universities and colleges. There are corporate library networks of university libraries and college libraries which is created by using this system.

Today the Tashkent University of Information Technology is the only university in the country that prepares bachelors and masters for the information and library industry. In the Information and Library Systems department, works on training modern specialists and librarians. Every year the department produces the 60 bachelor and 15 master students.