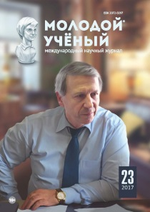 The analysis of the effective development of the children's brand has been made, the theoretical and methodological aspects of the leading brands have been revealed. The main features of the loyalty of the children segment and brands of food products market have been determined. Key words: brand, branding, children's brand, target audience, promotion, consumer market, branding efficacy.

Fast development of the modern information technologies requires increased development of branding, performing analysis of the efficacy of the brand promotion and taking leading positions. It is especially important to consider the matters of the children's brand position in the consumer goods market, its development, effective promotion, covering all the aspects of the social life, taking leading positions at the top of marketing disciplines. Everything mentioned above make this sphere of research extremely important.

Now the brand becomes the main asset of the company, some symbol (being as a rule visual and/or sound one), being the source of the concentrated information and/or stable emotional impulse for the customer making him/her to make choice in favor of the goods offered under this brand, causing additional cost and increasing market position of the brand-owning company. Unifications of the businesses and integration processes force the manufacturers to create the brands with strong values not only within the domestic market but also at global level. If the cost of the brand is constantly changing then the brand holds leading positions.

Children's market is currently at the stage of development, as the segment of the children's food products is the most developed one. Among the first companies interested in children's segment were the companies producing food products. Such trend is absolutely clear as there occurs the process of intensification of the basic adult food markets, profitability of which is gradually decreasing and many manufacturers are thinking about the search for the new perspective niches.

Leading manufacturers of the children's brand in the food market are the foreign companies with their wide range of products for children having their pocket money and doing shopping independently. But since 2005 a lot of domestic manufacturers have started to seriously compete with the foreign companies in their fight for Ukrainian children's market. Generally we now talk about the products bought directly by children (crisps, chocolate bars, and chewing gums). The manufacturers invent new categories of the products oriented to the national taste preferences. Thus, in 2005 AVK™ Company created new category of goods being fruit chewing candies produced on the basis of the natural components under the trade mark Zhuvilend™. It is evidently that this category raises interest. The dynamics of selling chewing candies in the Ukrainian market is constantly growing. For the period of 2005–2006 the realization volume of such sweets increased for 60 %. In 2007 Roshen™ Company entered this sweets segment in new category of goods. In 2009–2010 this category was dynamically developing (at 20–30 % growth speed) due to appearance of the new range of products and increase in the present one.

Ukrainian children's market has not still been segmented by the majority of the manufacturers and the regional specificity is still considered by few manufacturers. Nevertheless by solving this problem it is possible to apply both foreign and domestic classification. Leading world manufacturers determine such age categories: kids (4–8), twins (8–12 years) and teens (13–16 years). In Ukraine since the times of the USSR children have been traditionally divided into 4 groups including pre-school kids (4–6 years), young school children (7–9 years), young twins (10–12 years) and teens (13–16 years) Such distribution is rather formal as only general features of the age group are considered and not the specificity of perception and psychology of children. For example, 4–8 years children tend to search for the mutual interests, children of 8–12 years old look for independence and individuality whereas the most important for the children of 13–16 years old is to belong to some group. That is why there are quite different rules in the market. The goods and services in such market are sold to the parents self-motivated during the shopping. During the purchase and consuming of the food products the emotional factors of the child are changed into the rational ones. Such changes occur until the child ages up to 12 years. ,

According to the results of the expertise assessment the annual turnover, of the children s goods and series market in Ukraine constitutes about 25 bin. UAH and this showing is increasing annually for 15–20 %. But the parents still primarily demand the first necessity goods. Under the crisis conditions and due to the low salaries the matters of the rest and entertainment for children come to the second plane. 65 % of Ukrainian expenditures for children are spent to the food and cloths.

Promoting children's goods and services the manufacturers and sellers have to face many specific problems beginning from the advertisement perception by children and finishing with legal limitations. It is necessary to act effectively under such conditions, to develop own brand and correspond to the established standards.

When the children's brand is promoted there is chosen a specifically defined age demographic rout where the brand is created at the expense of the advertising investments, especially into the TV advertising. Otherwise, it is impossible to reach required level of informatively. The brand creates a fairy-tale about itself because without the fairy tale neither hero, even the funniest one, may create emotional adherence. The promises of such brand are understood by the adults but tick the children. Promotion of the majority of the children's brands with consideration of the peculiarities of the child perception contradicts to the standards of the marketing ethics. The children's brands are created because of the specificity of the child psychology. Children love fairy-tales and large number of repetitions of the favorite tale, they like heroes of their favorite tales and are very perceivable to the advertising [8]. ,

Children's brand creation is rather complex process combining parents trust and bright emotions of the children combining actuality, accuracy and psychological aspects. Any advertising of the products for children shall be based on the marketing researches. It is very important to know what children like and want.

According to the results of the global research of the company, Ipsos™ (Ipsos Marketing Consumer Goods) the parents want their children to become healthy by eating healthy food. This is first about the decreased risk of sicknesses, healthy heart and development of the mind activity of the child. They also expect correct meals to decrease the risk of illnesses in the older age. Better mind development and immunity increase.

Generally it is worth mentioning some leaders of the children brand under the international trade mark Heinz being one of the leaders in the market of the children consumption the trust to which is based on the quality, uniqueness, positive packaging of this product. Such popular brands as Rastishka™ by the Danone™ Company, Barny™ by the Kraft Foods™, Nesquik™ by the Nestle™ correctly consider the interests of the parents and child, combining the fairy-tale elements and the sex of the child. It is the balance of the trust and sympathy.

Thus, the brand as a symbol has certain associative image in the consciousness of the child consumer who believes in its truthfulness. It is the belief in certain qualities of the brand sold under it that the customer's choice is based on. The results of the researches show that strong brand can influence even on perception of the taste of the child. Specificity of the taste, bright and unusual packaging, easy name, certain association with a child hero, correct allocation and promotion of the product, consideration of the gender aspects are the prerequisite of successful selling and taking leading positions not only in the domestic market but also in the global one.

The success of the children's brand undoubtedly depends on large-scale, flexible assortment policy accompanying the customer, constant analysis of the need of the children, formation of certain knowledge and positive experience of the work and cooperation.