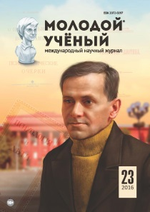 Having carrying out experimental research to the mathematical description of the displacing parameters of products in the drum when spinning, among the main factors determining the magnitude and nature of the perturbing forces acting on the suspension of the washing machine with a centrifugal spinning were pointed out, and studies were conducted to determine the experimental dependence of the strain rate of textile k7 product of the applied load p.

Previously it should be considered what difference and similarity of processes of deformation in textile products are in the field of centrifugal forces consists in and at annex of static loading to products.

Lebedev V. S. in work [1] describes as follows process of an extraction in the field of centrifugal forces:

«In the first period after loading drum with fiber fabric articles the growth of rotor speed make compacted state of them, thus under compressive load fluid is separated from them. It separates mainly the part of the liquid which is enclosed between the main and weft fabric weaves, as well as in the interstices between the fibers. The process of separating liquid at this time is carried out as similar the process of filtration through a porous barrier.

In the second period in the tissue extraction pores which are liberated from the liquid penetrates the air and tissue liquid pressure becomes zero. During this period, the liquid separation is carried out by depositing it under the effect of hydrostatic pressure centrifugal spin». It should be noted that, according to the description of the processes pressed during centrifugation, the first and second periods differ only in spin fluid outflow views and material deformation process thus remain virtually.

The same author [1] describes the spin by pressing:

«Spin compression is that the outer surface material is mechanically transmitted in product pressure. Located in the pores of the liquid product by an external compressive load and due to material deformation, it can characterize a change in its volume, internal pressure tests. As a result, the liquid penetrates through the pores of the material and is open at its surface.

The fluid motion in the pores of the compressible material can be regarded as filtering it through the porous body».

Hence it can be concluded that the process of deformation of the material may take place in the field of centrifugal forces, that can be modeled sufficiently accurately by applying the static load to the products in an enclosed space, i.e. by compression products.

It should be noted that the complexity of established relationship between the pressure applied to the material and the relative contraction of skeletal material in the closed space is that, as noted V. Lebedev [1], this dependence is linear only in the initial stage of compression.

Furthermore, as indicated by the authors [1], [2] and others the complexity of study of the deformation process of the material in compression is based on the fact that different types of articles and materials have relative relationship between compression and pressure which may be different.

Based on the fact that the processes take into account the deformation of the many kinds of products and materials used in everyday life, it is almost impossible, to study this issue with the use of sets of products carried out in this thesis, which is the most typical home laundry. Moreover, in each of the 10 experiments conducted a different set of products and materials were used. Here is a general list of the used products from cotton material and mixed fibers, including terry: gowns, trousers, cushion covers, bed sheets, sweaters, underwear, shirts, handkerchiefs, socks, towels, tablecloths, curtains, bedspread, sportswear and others.

For experimental studies a set of products compression in accordance with the recommendations in the paper [3] were used with help of measuring container with transparent walls of 19 dm3, an inner diameter of De = 0,270 m and a cross-section Se = 0,05723 m2. To measure the product mass in air-dry and wet products used electronic scales (Electronic scale) model CAMERON KFS-222 c limit weighing 5 kg and 0,001 kg precision, as well as models with Beurer BG39 weighing between 150 kg and an accuracy of 0,1 kg. For measuring linear deformation quantities of products used by the measuring instrument with measurement accuracy of 0,001 m.

Below in Figure 1 is a schematic diagram of the experiment.

During the experiment, the product is wetted with full immersion in water, then placed in the measuring container. Note that when moving products from liquid containers, as well as during placement of the measuring container a considerable part of free liquid can drip on product, which corresponds to the beginning of manufacturing conditions in the spinning process, the washing drum. Top superimposed light disk have sufficient stiffness, diameter Dd = 0,255 m. A weight was placed mgr(Figure 1) on the disc. 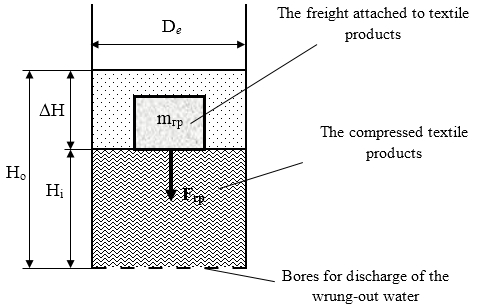 Fig.1. The scheme of the strain on the defining experiment products under load

Pressed fluid flowed through the holes in the bottom of the measuring container. This measurement was carried out when the product has height Н from the bottom of the measuring vessel to a product of the upper edge of the limited disk: value Н0, but in line with the initial value of goods unloaded height, Hi — is the current value of the height of product load Fgr.i=gmgri., Н=(Н0–Нi) is a change in the current height of the products.

Statistical data processing was carried out using MatLab software version 11, and then it is plotted in Excel.

An analysis of the data obtained let us point out that the process of deformation articles under load can be described with the relationship between the pressure applied to the products P, Pa, and relative deformation of products

we obtain function krel=f(р)for each of the experimental curve.

In determining the overall function using the entire set of experimental data regression the following relationship was obtained:

In determining the overall function following regression dependence was obtained for average values of the experimental data:

Based on the conditions of a more accurate description, for further calculations take the last function (2) obtained by the average values of the experimental data.

Here, in Figure 2, the field correlation is shown between the experimental values obtained by the strain rate and the reduced pressure and krel=f (p). 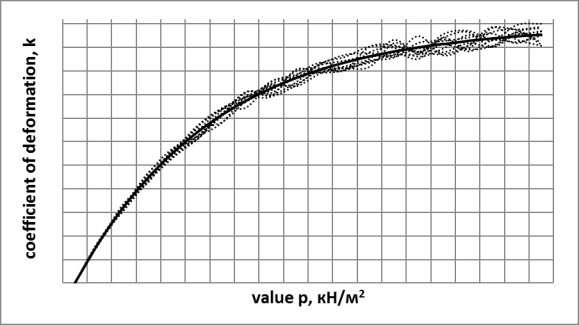 The resulting dependence of krel=f (p) is predicted by calculation ranges of possible values of the random eccentricity of the center of mass of products and related perturbing forces in the mathematical modeling of random oscillations of the suspension of the washing machine during the spin cycle.

Analysis of the behavior of krel=f (p) shows that at low pressures in the range of р=0…340 Pa the function is close to linear, which is consistent with the known findings about the nature of deformining textile products. When р3200 Pa is function tending to asymptote.

The resulting dependence of krel=f (p) is predicted by calculation the range of possible values of the random eccentricity of the center of mass of products and related perturbing forces in the mathematical modeling of random oscillations of the suspension of the washing machine during the spin cycle.