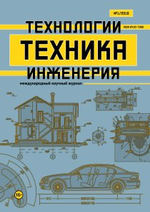 Recommender systems have become extremely common in recent years, and are applied in a variety of areas. Model-based methods play an important role in the recommendation. Model-based recommendation systems build a model based on the dataset of ratings. Existing model-based recommenders consider either demographics or content information. However, it is used to recommend for new user or new item. In this paper, we propose a decision forest approach to address the well-known cold-start problem. Our approach makes use of decision forest to constructing a model comprises users' information, items' information and rating to recommendation for users and items simultaneously. This approach can be used to solve double cold-start problem (new user and new item). First, we integrate dataset comprising both users' information, items' information and rating. Dicision system will be got through data conversion and data discretization based on the dataset. Second, a decision forest is generated with n decision trees based on the decision system. Third, we describe how the approach to generates cold-start recommendations. Fourth, a pruning method is proposed for decision forest. Experimental results on the well-known MovieLens dataset show that the pruning decision forest approach performs stably and the constructed trees are understandable.

Recommender Systems (RSs) [1, 2, 3] have attracted extensive attention in the academic and business [4, 5, 6]. Model-based RSs play an important role in the recommendation. Model-based RSs involve building a model based on the dataset of ratings. In other words, we extract some information from the dataset, and user that as a «model» to make recommendations without having to use the complete dataset every time [7]. Existing model-based recommenders consider either demographic or item information. It is appropriate to either existing item or known user. Moreover, it can be used to recommend for new user or new item.

The major advantages of the proposed approach is four-folds. First, we get a decision system. It contains user demographic information, item information and rating information. Second, this approach is valid to new user and new item. Therefore the new approach can be employed to double cold-start recommendation. Third, we propose a pruning technology of decision forest. Fourth, since the new approach is based on the decision system which contains user demographic and item information, it is less sensible to sparse data than model-based recommendation.

Experimental results on the well-known MovieLens dataset show that the pruning decision forest approach performs stably and the constructed trees are understandable.

In this section, we review MovieLens [11].The Table 1 shows the original data structure of the MovieLens dataset. It has three tables: user, movie and rates. There are three attributes in the Table 1 (a):age, gender and occupation. Many attributes are in the Table 1 (b), which can be classifed into two kinds of attributes, years and genre. Table 1 (c) shows the ratings of users for movies.

The original data structrue of MovieLens 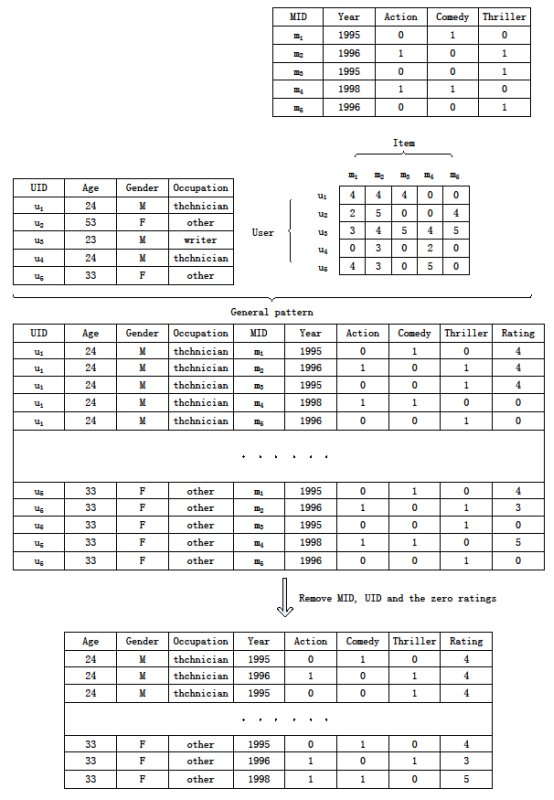 We will get the decision system through discretizing the data of lower part of Figure 1.

In this paper, we propose a pruning technology. It is discribed as follows. There are many genres of movie in the dataset, for example Action, Adventure, Animation, Children and Comedy etc. They are movies' attributes on the MovieLens dataset. As shown in Table 1, the value 1 means the movie is this genre, and the value 0 means not. If the value is 0, it expresses many case. For example, the value of comedy is 0, which means the movie may be Action, or Adventure, or Musical, or War etc. Many possibilities are existing. The nondeterminacy is little significance for recommend. So, we prune the branch of the value 0.

For new user, we can classify him/her according to the characteristics attributes. First, the characteristics attributes are matched in a decision tree. Then according to the leaf nodes of the matched branch, recommend or not can be decided. Such as, let a new user be a male writer at the age between 18 and 24. According to Figure 3(b), first he mathes the left brance of the root.Then there is only one branch for Action movie.Finally he mathes the rightmost branch according to Occupation.The leaf indicates a rating of 5.Therefore, it shows that he likes Action movies, which will be recommended to him then.

For new item, we can classify it according to its attributes. The process for new item is similar to it for new user. The new user's/item's attributes are matched in every decision tree of the decision forest.

In this section, we try to answer the following questions through experimentation.

We experiment with one well-known MovieLens [11] dataset which is widely used in recommender systems (see, e.g., [8, 20]). We use the version with 943 users and 1682 movies. The original Rate relation contains the rating of movies with 5 scales. All users have watched at least one movie, and the dataset consists of approximately 100,000 movies ratings.

We select one case for test set in dataset randomly, the remaining n-1 cases for training set. In order to know the size of the forest when the accuracy of pruned decision forest keeps stable, the numbers of random trees defined by us is from 10 to 700. 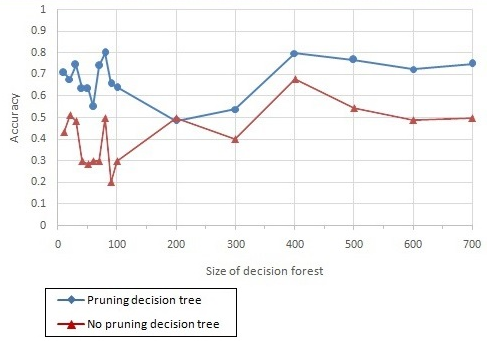 12. He, X., Min, F., Zhu, W.: A comparative study of discretization approaches for granular association rule mining. In: Proceedings of the 2013 Canadian Conference on Electrical and ComputerEngineering. (2013) 725–729