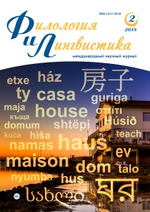 Contribution of scholar Pham Quynh in the topic of travel-diary literature in Nam Phong magazine published in Hanoi (1917–1934) was evaluated. Specific historical viewpoint for objective evaluation the reflective spirit of Pham Quynh in travels inside the country and in France was determined. Reflective voice in the transformation process from tradition to modern and the trend of integration, development and exchanges between the East and the West in the first half period of the 20th century were emphasized.

Scholar Pham Quynh (1893–1945) had pen-names such as Thuong Chi, Hoa Duong and Hong Nhan. He was born in HaNoi. His native place is Hai Duong province. Pham Quynh was Director and Editor-in-chief of Nam Phong magazine (published in Hanoi from 1917–1934). Pham Quynh founded and was the chairman of the Tien Duc Association for the advancement of learning. He went to France to take part in Marseille exhibition fair, delivered a speech about ethnic and educational issue in Political Committee and Moral Committee of French Academy. He used to give lectures at Hanoi College and was assistant editor of France — Indochina newspaper. He also took part in Indochinese Economic and Financial Council and recommended Constituent theory that require France to set up basic rights for Vietnam in the interrelation with protective government. He was Assistant Chairman of Hanoi Geographic Association and general secretary of the Social Relief Committee in the North Vietnam. Afterward, he worked for Hue Court as a Cabinet of the emperor (1932–1933), then was Prime minister of Education (1933–1942) and Prime minister of Interior (1942–1945). Pham Quynh was arrested and sentenced to death by Viet Minh because he was suspected as a French lackey (1945).

During work in Nam Phong magazine, along with research, compilation, edition and introduction of Vietnamese and the world politics, society, history and culture, Pham Quynh made a remarkable contribution in the field of travel-diary. The fact shows that Pham Quynh's travel-diary works are quite diversified in terms of purpose, journeys and the magnitude of the author's lyrical voice. Despite the intersection of the nuances of content, readers still able to point out the highlights as well as the different color palette in Pham Quynh's travel-diary works. There is a travel-diary line of duty and mission. This type of travel-diary was usually written by intellectuals and journalists. On the other hand, because the Nam Phong magazine was subject to the direct management of the contemporary government, it was obligatory to speak the voices of the people. However, these travel-diary works still show the national pride and sincere feelings with the beauty of the country. Moreover, from the historical point of view, there will be many pages of Pham Quynh's travel-diary such as Ten Days in Hue (1918), One Month in Cochin China (1918–1919), With Cochin Chinese envoys (1920) are indeed worth reading to consider many socio-cultural events and position of the administrative organization of the upper class civil servants under the colonial feudal dynasty. From early on, Pham Quynh wrote travel-diary to express his curiosity and happiness when exploring landscapes and historical monuments as well as suggestions on how to organize and run festivals such as the Huong Pagoda (signed as Thuong Chi, 1919). Set in the contemporary socio-cultural context, these writings opened up new perceptions, created excitement and awakening to the new that the author was insiders. Beyond the national boundary, Pham Quynh had France travel diary (printed in 27 seasons, 1922–1925), Travel tales in Paris (1922) and Travel to Laos (1931) [1]. In fact, the division of method, type and content of Pham Quynh's travel-diary writings as above is just relative. Although having differences, his travel-diary writings are still oriented in the mode of walking and watching, betting on the positive subject who is the direct experience and pursues good qualities, separates from the secular mischief.

At the end of the second decade of the twentieth century, the scholar Pham Quynh also came from the North to the South (Saigon — Gia Dinh — Nam Bo) and left a vivid travel-diary writings through his work One Month in Cochin China. Not only in Saigon — Gia Dinh, Pham Quynh also eagerly visited some western provinces, spreading all over My Tho, Cai Be, Vinh Long, Sa Dec, Long Xuyen, Can Tho and getting to know many new things in social life, landscapes, residents, languages, customs and habits. After the trips and all the sightings then returned to the North, cultural activist Pham Quynh came to the conclusion as a wish: “The more I traveled to Cochin China, the more I felt the sense that people in the North and the South were really the same Vietnamese. If we join together, Vietnam's future could not be diminished. I would like to burn the incense fire and pray for that solidarity, and it is fortune of our country” [3].

Cultural activist Pham Quynh with France travel diary and Travel tales in Paris made important contributions in the type of travel-diary about France, expressing the reflective spirit on the national status and Vietnamese-French relations in the early twentieth century. In fact, the Travel tales in Paris is a summary on the basis of the content of the French travel diary and was presented by Pham Quynh at the Hanoi Music Festival held on 15–9-1922 by the Tien Duc Association for the advancement of learning.

According to the Pham Quynh’s diary, the trip departed on March 9, 1922 at Hai Phong port and returned on September 11. He deliberated to Go — See — Listen as much as possible, then compare French civilization with Vietnam. In France, he went to Marseille, Lyon, Versailles and Verdun many times and visited all of the offices, historical sites, cultural sites and places in Paris. Wherever he went, he recorded, commented and compared the real life in metropolitan with the life in his motherland and expressed the impression of what he has seen. [4]

In France Pham Quynh was surprised by the superiority of science, technology and material life in the metropolitan. He perceived the difference and admired the magnificent Le Louvre palace, the Eiffel Tower with elevators, tall buildings, hotels, comfortable restaurants, bridges spanning the mighty Seine, parks, streets, luxury villas, etc. Visiting the tomb of Napoleon, Pham Quynh described the sightings and displayed an extensive source of his knowledge: “Often read in the book of Chinese travelers to Paris said: tourists to Paris without watching the tomb of King Napoleon is not known Paris”. Pham Quynh was very willing to buy books, read books, listen to lectures and directly participated in lectures at many cultural centers, science, research institutes, and universities. As an intellectual, visiting an ethnographic museum, he remarked: “The education of the West, whatever subject, is so thorough and complete, thereby their learning is so deep and advanced”. Looking back to the homeland, he awakened and self-reflecting: “In Hanoi, there is Association of Tri Tri and Association for the advancement of learning which slightly have these points but need adjusting. At present, there are only few useful meetings, sometimes there are some friendship association meeting to discuss, some bosses with vain issues, sometimes speak loudly but not yet out of the way «the village» which mean noisy mess that no story” [6].

From the perspective of a social activist, cultural activist and politician, even in Marseille, Pham Quynh came to hear a female doctor lecture on «the revolutionary movement and extremism in Russia». This showed the liberty and democracy in political life of France at that time, and was applauded by Pham Quynh, he even compared with the Eastern social thought [6]. Attending a discussion on educational policy, Pham Quynh continued to waken and withdrew the conclusion: “In a free country, anything can be brought to the public to discuss. People say and stand in the middle of the judgment, the government is eclectic, this is better than the policy of «freeze» that is not beneficial to anyone”. He attended lectures, had a «look» at a discussion, listened to senators questioning Government in Senate, then considered and proposed: “Listen to their speeches and think of our country people, not only they do not know how to lecture, but to tell the story they also do not know. People in our country need to learn talking so much” [6]. Afterward, in Travel tales in Paris, Pham Quynh continued to point out the importance of public, democratic and humorous debates, he emphasized: “If so, going into politics is boring, isn’t it? And Parliament likes a vegetable market, doesn’t it? If so, parliamentarians of our country every year go to Hanoi for a few days, asking the Government to go to see Cheo singing, are better than parliamentarians in the West every day come out to the public place and quarreled like cows, aren’t they? A parliament need to have a political party, a political party need to have competition, competition make a parliament better, that is the evolution of nations in the world. Our country has not reached that level yet. Should I be happy or regrettable? That questioned the people” [6]. Obviously, Pham Quynh awakened and recognized the new, the difference, the developments and advances in the outside world and hoped that people in Vietnam would refer and follow France.

Comparing the traditional education and thinking with other country, scholar Pham Quynh realized that every day in France he can learn and know many new things. When he came to see the roll-call soldiers at the horsemen's house, he realized the truth of life: “People here are alike people in our country, perhaps people anywhere are the same, all of them like festivities”. More importantly, Pham Quynh was really awakened and had an overview expressing his viewpoint about society, the relationship between Vietnam and France, the interrelationship of the East and the West and identifying the way that society evolves: “The streets of luxury seem to be unhappy as the popular villages; the upper strata still do not want to attend. Even in equal democratic countries, strata still discriminate to each other and the complete equality is probably never happen” [8]. From the reflection, Pham Quynh stressed on the need to improvement and transformation towards innovation, integration and development on the basis of education and traditional culture: “The Western civilization is so intricate, so many «aspects», to cover it all and collect the whole is very difficult. There must have a strong learning power, a wise mind and unusual bright eyes in order not to make mistakes and wrong guesses”. [8]

There is no doubt that Pham Quynh was really persuaded by France «the heart of the world», «the brain of civilization», «the essence of culture». Toward France, he found that this was a relationship of belonging, should be based on the French technical and political-cultural structure. He awakened the desire of his homeland to evolve, but also saw the limitations and shortages created by a small, backward and stagnant economy. It is important to note that Pham Quynh was not an one-dimensional mechanical person, he always tried to find a suitable way to renovate; he respected French culture but preserved national tradition, promoted French learning and still recommended to learn fluently Vietnamese “Only learning foreign languages when having time”. He always recognized himself as an intellectual, paying attention to ring the bell to appeal to compatriots and authorities. All of this show that the scholar Pham Quynh really deserves to be an intellectual and excellent activist of Vietnamese culture in the first half of the twentieth century.