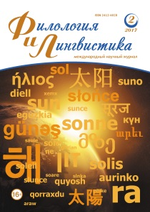 The present paper examines some peculiarities of the news text structure highlighting economic events. For readers to improve and perfect the reading skills related to understanding economic events it seems to be quite a productive way the approach of 'chunking' the news text into several parts according to their level of information relevance. Moreover, economic text processing boosts linguistic mentality and skills to thoroughly analyze the text in combination with its form and content. When doing so, certain peculiarities related to the news text structure should be taken into account.

It is a well-known fact that economic relations are considered to be the basis of any society and its activity and they do to some extent have their peculiar impact on our interests. The development of global economy, the era of world economic relation formation, the influx of economic information generates people’s interest in economic news. The choice of the best solution to this or that economic issue increasingly influences the level of development of the society, the stability and the power of the state.

The global processes in the world economy as well as any changes and events in the economy of certain states are covered through a wide range of media such as both print and online press /magazines, journals, newspapers, books/, broadcast media /radio, television, the internet/. Modern mass media make an inextricable part of human life and provide an essential way of being updated on events going on worldwide. Identifying the key peculiarities of events raises the people’s awareness of the world events. All means target the mass audience by providing them with access to information, as well as securing its dissemination. Mass media exert a powerful influence on people's opinions. This is the news that informs us about the facts and events of the global economy, shapes our evaluative attitude towards them, prompts the procedures of their characterization and analysis by the individuals as well as by the society as a whole.

Being a linguistic product of previous discourse activity, a news text covering economic events is designed for gaining, processing, preserving and conveying knowledge related to economic domain. Any economic news text is characterized by the information on some economic event and the use of reasonable arguments and facts relevant to it. The interpretation of economic news texts is preconditioned not only by explicitly but also implicitly presented information, which in its turn shapes the system of presupposed meanings of the text.

In the present research, an economic event is defined as any occurrence that takes place in the global economy, as well as in certain countries’ economies and involves any situation triggering ups and downs of economy, for instance, the production of new items, the launch of companies, the start of their cooperation, mergers, takeovers, collapses, a sudden fall or increase in the value of securities and so on, which are evaluated by the society as vital and significant changes in the economic world.

As is known, the structural description of any event is fulfilled based on the information represented by the event constituents. This type of information exists in the form of a scenario which involves data about people and the goals of their activities. The scenario is a means of arranging information and representing it in the form of frames. «A frame is a data-structure for representing a stereotyped situation like being in a certain kind of living room or going to a child's birthday party. Attached to each frame are several kinds of information. Some of this information is about how to use the frame. Some is about what one can expect to happen next. Some is about what to do if these expectations are not confirmed» [1]. Economic events are dynamic phenomena that proceed according to some frame-scenario. The latter contains slots filled with data for an adequate perception of events. A person facing a new situation resorts to his/her memory to choose relevant information for a stereotyped situation. When a situation is not stereotyped and the expectations are not met, the frame can be adapted to coordinate the given data. Within the frame-scenario nuclear (the slots of agent, change, time and place) and alternative (recipient, cause, effect, intention, instrument, predictions, evaluation) parts are identified. The analysis illustrates that for appropriate understanding of economic events besides nuclear slots it is necessary that some alternative slots be activated to provide the reader with relevant information.

T. van Dijk’s approach to the structure of news stories revolves around the idea of centrality of cognitive process through which readers comprehend a news story. He observes that a news story is organized around a staged-structure, which he terms «news schemata» which has a «top-down» orientation where the story begins with a headline and a lead summarizing the focal points of the story. This first element is followed by other elements in the news schemata such as Main Event, Consequences, Previous Events, Verbal Reactions, Evaluations, etc. His view is that the structure is oriented towards the experiential meanings of the news text. The story is concerned with «5W» and «an H» (what, where, when, why, who, and how). The ideational meanings here are arranged by the principle that «the most important and relevant information is put in the most prominent position, both in the text as a whole and in the sentences» [2].

This organization of news texts accords with what in journalism is commonly known as the principle of an «inverted» pyramid simply because it is an upside-down pyramid with the most important information at the top. The method of inverted pyramid offers a wide range of benefits providing readers with a rapid assessment of the whole article. Starting with the conclusion containing the most relevant key information means that readers can quit reading at any point and still have an overall understanding of the news. Front-loading of each paragraph allows readers to skim the first sentences of every paragraph and get a quick overview of the entire article. In this respect, the editor is able to omit some parts of the material without causing any substantial harm to the content of the news [3; 4].

An economic event highlighting text structure possesses a standard scheme involving a headline, a lead, a main body and a conclusion. Each part has got its peculiar functions, purposes and directions.

The headline of a news text is a thematic message expressed by the title of the article presenting readers with the basic content of the message which evokes readers’ interest to perceive an overall meaning and observe the details of the given information [5]. By producing brief preplanned background information in the form of a headline, the author of the article targets readers’ emotional world, mentality and ways of perception making them follow his views and outlooks. In this respect, the journalist applies a range of manipulative tools to achieve his/her goals.

The lead as a component of the news is a starting point of information serving as a base for further logical coherence of the text whose semantic expansion is realized in the main body. The latter can either grasp readers’ attention to thoroughly read the message and examine its details or it can suppress the desire to do so [6].

The main body is a decisive and explicit part of the news directed to perceive the data, which is expressed in the headline and gradually unfolded in the lead. Its goal is to convey the main message of the news unpacking the main meaning previously designed by the author whose goal, in its turn, is to persuade readers that his/her judgments referring to a certain economic event are true by constantly providing factual material saturated with proofs and evidence.

Finally, the conclusion performs a summarizing function, concluding the results of the entire message and bringing it to its logical end. Besides this, the conclusion can involve forecasts for further developments of economic events depending on some circumstances or it can provide readers with additional information to more comprehensively get an insight into the entire situation.

This structural model is applied to any news text irrelevant of the fact what type of news is highlighted. Let us analyze the structure of the news on an economic event posted on the website www.theguardian.com.

The headline of the text already presents readers with the basic information related to the event. Including in the headline both the cause and the result of the event, the author of the article provides the whole picture of the situation that the shares of Virgin America airlines rose after it started to seek buyers. By doing so, the journalist extends readers an opportunity to choose between further reading of the text or quitting it.

In the lead the data get more elaborated informing readers about the temporal and spatial details of the event as well as about the founder of the company:

Virgin America shares soared on Wall Street on Wednesday following reports that the airline founded by British entrepreneur Sir Richard Branson is considering selling itself to a third party.

In the first paragraph of the main body, readers are updated on the details about the company's activity, the information on the shares increase is repeated, this time some figures are also presented /shares were up $4.10 to $34.78 at 11.15am, valuing the company at $1.5bn (£1.05bn)/:

Next comes the company's spokeswoman's announcement highlighting the airlines' policy. Some data touching upon the company's history, image and successful performance of 2014 are also provided:

A Virgin America spokeswoman said: «As a public company, we have a policy of not commenting on any market or media speculation concerning mergers or acquisitions involving Virgin America.»

News of the potential sale comes just a year and a half after the company, which according to Bloomberg is 30.85 % owed by Branson’s VX Holdings, floated on the Nasdaq in New York.At the time of the initial public offering (IPO) in November 2014, Virgin America was valued at just over $1bn.

The budget airline has attempted to differentiate itself from established competitors in the US by giving itself a cheeky and playful image with purple mood lighting and planes named Virgin & Tonic and Jefferson Airplane.

Virgin America made a pre–tax profit of $61m on sales of $1.4bn in 2014, according to its annual statement released last month. At the time, Dan Cush, the airline’s president and chief executive, said: «2014 was a remarkable year for Virgin America on every front. We achieved record profitability and significantly strengthened our balance sheet by going public in the second largest airline IPO in history.»

In the conclusive part, the airline’s president shows his appraisal of the company's achievements, implicitly attracting new investors by mentioning that the company is working on a sound and prosperous basis:

«Both our existing and new investors have shown confidence in our low–cost, high–amenity business model — and we’ve continued to sweep the major travel awards for both operational excellence and our innovative service.» [7]

Thus, the structure of this news text comes to prove that the principle of an ‘inverted’ pyramid operates also in the news highlighting economic events. Therefore, when reading news texts it might be an effective approach for readers to skim through the headline, the lead and the first sentences of the main body paragraphs to get an overall idea of the message expressed in the news. This time-effective method will encourage them to grasp the main idea as quickly as possible, and readers will be able to reproduce the content of the news in a couple of words, using key words and relevant information provided in the mentioned parts of the text structure.