From the history of poetics 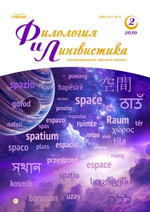 The article provides a review of theoretical studies that consider the concept of poetics. The characteristic of fundamental works devoted to the definition of the phenomenon of poetics from antique period to the present time in foreign and national literature is given.

Jan Mukarovsky defines poetics as the aesthetics and theory of poetic art: “Poetics — “the doctrine of the Genesis (syncretism), the essence (mimesis, image, sign, symbol, allegory), types (kinds, genres, modes) and forms (motive, plot, personnel, tropes and figures, dialogue and monologue, etc.) of verbal literary creativity; a system of scientific concepts, justified from both philosophical and linguistic points of view and adequate to its dual subject “the artistic language of literature” and the literary work as a statement in this language” [4, p. 56].

Viktor Zhirmunsky calls poetics “the science of literature as an art, the science of poetic art, the science of poetry, in other words, the theory of poetry” [5, p. 231]. “If we accept this, lightened by time, — the scientist believes, — we can consider that in recent years the science of literature has developed under the sign of poetics. It is not the evolution of the philosophical worldview or the “sense of life” on the monuments of literature, not the historical development and change of social psychology in its interaction with the individual psychology of the poet that is currently the subject of the most lively scientific interest, but the study of poetic art, historical and theoretical poetics” [5, p.243].

The founder of poetics is Aristotle. His work «Poetics» can be considered the first detailed study of poetics, as a fundamental element of the analysis of artistic literature. Analyzing the poetics of ancient Greek tragedy and comedy, Aristotle established the theoretical foundations of literary study. He proceeded from the idea that there must be an “art”, by owning it to compose a tragedy, and there must also be a science that teaches this art.

Such a science, — says G. K. Kosikov, — “the science of creating” poetic works, instruction in the art of composing exemplary tragedies was “Poetics” by Aristotle [1, p. 10]. According to Aristotle, the aim of poetics is “to instruct the poet in his creativity”. Secondly, it had a normative and prescriptive character, and these instructions were thought of as valid for all time immutable rules that the poet must strictly observe. Aristotle’s “poetics” was pragmatic, as it contained a set of practical rules. In the Aristotle’s doctrine was paid attention to the evolution of themes, artistic means, in particular, metaphor.

In the history of European poetics, there are two main stages in its formation and development: the first from antiquity to the turn of the XVIII-XIX centuries, and the second — from the end of the XIX century to the present. At the first stage, the poetic teaching had been passed the full cycle of its development, and poetics not only preserved, but also clearly followed the ideas of the literary work as a whole and in any part of its ideal prototype. In the middle ages, the provisions of Aristotle’s theory formed the basis of the provisions of the rhetoric of trouveurs, who developed new methods of poetic technique. The real scientific research of Aristotle’s work began during Renaissance. Translated into Italian by Julius Caesar Scaliger in 1570, “Poetics” became the basis of his own system of aesthetic principles that met the requirements of the fourteenth century. Analyzing the main purpose of art, Scaliger and his follower Giacomo Castelvetro emphasized that art should teach and give pleasure. Thus were laid the foundations of the aesthetics of classicism, developed in detail by N. Boileau in the poem “Poetic art” (1674).

In the age of Enlightenment with the advent of realistic trends in literature revealed the limitations of the provisions of normative poetics: the rules did not help to fully reflect the diversity of manifestations of life. Thus began the destruction of poetic and rhetorical teaching. Formed at the end of the XVIII century, the Humanities laid the foundations of a new science — literary studies.

The task of poetics: select a literary work as a phenomenon of art from other works of literature, answering the question about its nature as an artistic whole; to distinguish a work of verbal art from nonverbal artistic creations, defining the specifics and the limits of speech material; to identify the main aspects and elements of artistic structures and their functions; identify types of works; to establish the most important stages of the historical development of verbal artistic creativity; to describe the main “artistic languages” that exist at different stages of the history of verbal art and to study the processes and establish the laws of literary creativity: its Genesis, the historical change of artistic languages and the dominant types of literary works, as well as the transformation of various genres and their structural elements.

On the basis of correlation of structures of the poetic text with individual psychology of the author and the reader was formed theoretical poetics which originated by Alexander Potebnja and Wilhelm Dilthey. A. A. Potebnja in the book “From notes on the theory of literature» (1905) defined the tasks of general, or theoretical, poetics: systematic study of poetic techniques, their comparative description and classification. “Theoretical poetics must build, on the basis of concrete historical material, the system of scientific concepts that the historian of poetic art needs in solving the individual problems that confront him.” [2, p. 28]. The same idea was expressed by V. B. Tomashevsky: «The task of poetics (otherwise-the theory of literature) is to study the ways of building literary works. [3, p. 56]

Under the theoretical approach, literary phenomena are subject to generalization, and therefore are considered not in their individuality, but as the results of the application of general laws of construction of literary works. Each work is consciously divided into its component parts, in the construction of the work there are different methods of such construction, i.e., ways of combining verbal material into artistic unity. These techniques are the direct object of poetics. “If attention is drawn to the historical genesis, to the origin of these techniques, we come to historical poetics”. [6, p. 77].

The next stage of development of poetics began at the turn of the XIX-XX centuries by developing it on completely new principles. Modern times have given many theoretical works devoted to the study of poetics, and many interpretations of this term. In the first decades of the XX century, there were also two directions in solving this problem by more closely studying and continuing the scientific tradition of literary criticism of the early XIX century.

A new stage in the development of poetics in the history of Russian literary studies was marked by the publication and great influence on specialists of monographs, collections of works and individual articles by S. Averintsev, M. Bakhtin, N. J. Berkovsky, V. V. Vinogradov, L. J. Ginzburg, D. S. Likhachev, L. E. Pinsky, B. A. Uspensky, A. P. Skaftymov, which were on paramount methodological importance. An important role in the development of actual problems of poetics was played by the reissue of the most important studies of V. M. Zhirmunsky, V. J. Propp, A. P. Skaftymov, U. N. Tynyanov, B. V. Tomashevsky, O. M. Freudenberg, B. M. Eichenbaum, A. A. Potebnja and A. N. Veselovsky. In the 1960s, attempts were made to revive poetics as an essential component of literary theory. Almost simultaneously (1963–1965) M. M. Bakhtin’s «Problems of Dostoevsky's poetics» (the second edition, the first was published in 1929), U. M. Lotman’s “Lectures on structural poetics” and a three-volumed «Theory of literature» prepared by the staff of the Academy of Sciences were published.

“Along with the considered meaning of the term poetics (as a scientific discipline), there is another meaning in the composition of such expressions as “poetics of literature” (a certain era, for example, antiquity or the middle ages), “poetics of trends” (romanticism, realism) or genre, “poetics of the writer” (Pushkin, Gogol), “poetics of the literary work”. In these cases, poetics is called a system of structural features of a given phenomenon and a set of meanings assigned to them, that is, such properties of a whole period in the history of literature, a trend or genre, the writer’s creativity or a literary work, which is considered to be the subject of study of poetics as a science”. [7, p. 190].

The goal of poetics is to understand the “objectively inherent” meaning of the text, determined by scientific methods, although this meaning is changing, because in the history of culture there is always a rethinking of artistic structures. Some of the meanings contained in a literary work are lost in the course of history: the context necessary for understanding disappears. On the other hand, in the course of historical development there is an enrichment of meanings.