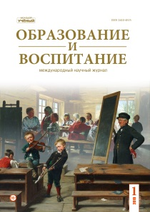 In modern linguodidactics as well as many years ago, the problem of finding and choosing the most effective and rational methods of teaching foreign languages ​​that meet modern learning conditions and meet the requirements of modern education standards remains relevant and unresolved.

Information about the study of foreign languages ​​refers to remote times: in the development of culture in Syria, ancient Egypt, Greece, Rome, foreign languages ​​had practical and general educational significance due to the lively trade and cultural ties between these countries.

Their role did not reduce also in the period of the Middle Ages, as evidenced by the literary monuments of that time and lexical borrowings, marked by the dictionaries of Western European languages.

At first Greek and then Latin were the main foreign languages ​​that were taught privately and in schools.

The Latin language played an exceptional role (for 15 centuries).

Only with the development of national languages ​​in Western Europe, the Latin language loses its dominant role, remaining, however, in the general education system for many years.

Knowledge of Latin was the first sign of scholarship. Back in the beginning of the last century, dissertations were written and defended in Latin in Germany.

For teaching Latin translation methods were used, which later had a significant impact on the methods of teaching Western European languages ​​- French, German and English.

The concept of teaching method

Teaching methods — one of the most important components of the educational process. Without the use of appropriate methods, it is impossible to achieve the goal, to implement the intended content, to fill the training with cognitive activity.

Together with the change of methods, the very concept of “teaching method” developed both in Russian science and in foreign theories of teaching and learning languages. Currently, this concept does not have an unambiguous designation in the scientific literature.

In the domestic methodology of the foreign languages the term “method”, in addition to designating the entire system or the entire field of study, can denote individual elements of the system (the method of teaching phonetics or grammar, etc.), which often corresponds to the term “techniques” in other countries.

In modern science, an approach is being approved according to which teaching methods are an extremely complex, multidimensional pedagogical phenomenon.

Method (from the Greek. Tethodos — «study») — a way to achieve the goal, a certain way ordered activity; reception, method or mode of action; a set of techniques or operations of practical or theoretical development of reality, subordinate to the solution of a specific task.

There are many definitions of the term “method”:

The teaching method is a “system of purposeful actions of the teacher, organizing the student’s cognitive and practical activities, ensuring that they master the educational content and thereby achieve the learning objectives.

The teaching methods are “ways of interaction between the teacher and students, aimed at solving a complex of educational tasks”.

In the didactic manuals of the beginning of the XIX century, the method was given the following definition: “Method is the art of the teacher to direct the pupils' thoughts in the right direction and organize the work according to the plan.”

Many scientists believe that the method is the main tool of pedagogical activity.

It is with its help that the product of training is produced, the interaction of the teacher and the students is carried out.

In other words, the teaching method organically includes the teaching work of the teacher (teaching) and the organization of educational and cognitive activity of students (teaching) in their interrelation, as well as the specifics of their work in achieving educational, developmental and educational goals of teaching.

From the logical and substantive side, teaching methods can be assessed as a logical method used, with the help of which students consciously master knowledge, skills and abilities.

Wishing to emphasize the content-methodological essence of teaching methods, they can be defined as a form of movement of the content of training.

To the main features that should distinguish groups of methods at the end of 20th century.

To the main features by which it is necessary to distinguish groups of methods at the end of the 20th century. include the following:

1) the presence or absence of the mother tongue when teaching foreign languages; Typical names of the methods of this group: direct, transferable, mixed;

3) the use or non-use of special mental states of students who master the foreign languages (sleep state, relaxation, the effects of auto-training, etc.); Typical names of methods: alternative (or intensive, suggestive, etc.) and traditional (usual).

On the basis of the listed signs in the works on the history of the methodology, the following methods are distinguished:

2) direct and natural methods and their modifications;