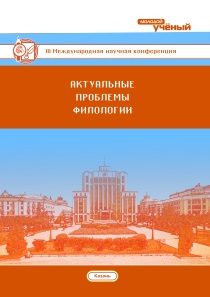 Learning a foreign language is the comprehension of a new culture and the attempt to join it. Idiomaticity, being an integral part and a peculiar treasury of any language of the world, promotes familiarizing not only with language, but also with culture. Indeed, idioms reflect an originality of culture, country life and centuries-old history of the people. That is why their studying is very important.

There are many different sources of idioms. As will be clear from what follows, the main thing in an idiom — its value. That is why the native speaker does not notice that a particular idiom is grammatically incorrect. If the source is known idiom, sometimes it is easier to guess its meaning. The choice of words depends on a person whom you are talking with, as well as on the situation or the place at the moment of conversation. In other words, idiom is an important expressive mean of language. It is a steady expression with its independent meaning. Mostly, idioms are created by the people and therefore are closely related to interests and daily occupations of ordinary people. That is why idioms are almost never translated literally.

The letter, request, business proposal finding speech feebleness of the compiler and compiled without the knowledge of stylistic rules, may be regarded, in addition to functional discrepancy to target settings, as an anti-advertising which entails a reduction in relation to the seriousness of the perceived information. Official documents prepare the conclusion of transactions, important meetings, negotiations, contain overhead information, complaints, suggestions, that is, with the help of these documents, which are written dialogue of legal entities, the critical issues of economic and legal activities of the organizations are resolved.

It would be incorrect and unfair to call the official-business style stationery. This style is expedient which has its own means of expression, ways of naming objects and phenomena, and is even expressive in its own way. Thus, the understanding of specifics of the translation of official documents is very important for professionals.

The language of business communication does not imply the presence of an emotional vocabulary. The sphere of idiomatics in modern linguistics is rather complicated and contradictory. There are different views on business language. It is believed that the language of business communication is literal, not metaphorical, that business people, communicating with each other, do not use idiomatic expressions, phraseological turnovers, and other expressive means of language. Nevertheless, there is no unemotional communication, the activation of emotion «is veiled» by the speech idiomaticity. This role is quite limited, idioms can be assimilated to spices which are added to food carefully, by a pinch, on a knife tip, and the food itself, that is the speech, consists of completely different, less spicy and bright, neutral components — words and phrases of not idiomatic character.

Defining the infrastructure of a speech idiomatization against the background of the existing idioms of any of the modern languages, we mainly focus our attention on the collective nature of this process including set phrases and paremias. However, «to speak idiomatically» does not necessarily mean «to use idioms in the speech».

The person «speaking idiomatically» is perceived as knowing language at rather high level, capable to transfer the thoughts uncommonly and creatively. In his or her speech, idiom is not always present as such. The notions «idiom» and «idiomaticity», according to A. N. Baranov and D. O. Dobrovolsky, are not identical: idiomaticity is a more general category than idiom. Idiomaticity of speech in this context implies «the complicated way of expressing of the content, that is complicated not in the sense of the maximum complexity of linguistic forms as such, but of the «concentration» of expression and falsehood of understanding» [1, p.51]

In business communication, as well as in any other, the indirect actualization of speech is more difficult to understand. The idiomaticity is more brightly expressed in this type of the speech act when a language game is most commonly used. Here, the obligatory condition is to understand a discourse with its connection with preconstruct (presupposition) and the unconscious.

In the speech of business partners, similar implicit information which the sender often includes in the well-known metaphorical statement is found. Yu. D. Apresyan has noticed: «that language means of expression of emotions are extremely metaphorical. Emotion is almost never expressed directly, but always assimilates to something» [2, p.98].

The distinctive feature and significance of metaphor is its ability to form and verbalize new concepts in the subsystems of language, where the installation on figurativeness is not leading, as well as in business discourse.

J. Lakoff and M. Johnson consider that metaphors as linguistic expressions are possible because all conceptual system of the person is metaphoric.

In our minds, there is an idea of time as about the value comparable to money. The metaphor «time is money» considerably structures activities of people in modern western industrial society. The American researchers note that this metaphor is manifested in the life of society as a unit of payment of telephone communications, an hourly wage, a payment for hotel rooms, an annual budget, percent on loans, accomplishment of public duties measured by time spent on them.

This practice is relatively new in the history of mankind and does not exist in all cultures. Since people in the western society in their activities proceed from ideas of time as values comparable to money, they also perceive time in this way.

Metaphor is a conceptual phenomenon, when there is a transfer of conceptualization of observed mental space on directly observable that in this process is conceptualized and included in the general conceptual system of this linguistic community.

Figurativeness of the speech of a person who wants to indirectly express his or her feelings, makes the receiver to think logically to understand the meaning of the spoken. In the speech of business partners, there is implicit information which the sender often concludes in the well-known metaphorical statement. A distinctive and significant feature of metaphor is its ability to form and verbalize new concepts in business discourse. In this capacity, metaphor can be called conceptual, that is, creating concepts.

Speaking about the written business discourse (business letters, contracts, reports, and other types of documents), it may be possible to assert that not completely rethought motivated phraseological units, resulting from the merger of lexical components and being the expression of a single holistic values, are used in written business discourse. These units are phrasal stamps, standardized stylistic clichés. For example, “Your prompt (early) reply will be appreciated”, “We look forward to hearing from you soon” [Tacis Project].

In business language there are also steady combinations which have become terms in business discourse: “This principal reason for this fast-food development is to increase cash-flow”, “Imported “Bush legs” are said to sell at 5 Rb less than the factory production” [Tacis Project].

In oral business discourse — in negotiations, business phone conversations, activities in the field of sales, promotional activities of companies, etc., there is a quite frequent use of: 1) unmarked clichéd phrases: “Please feel free to contact us any time you need”; 2) stylistically marked lexical units, including metaphorical and idiomatic expressions: “In answering the question ‘How do you make globalization work?’, Percy Barnevik describes the ‘global glue’ that keeps the many different people in ABB together”[Newsweek, 1990].

Despite the fact that each person uses the steady combinations based on vital philosophy of his or her people, in the business vocabulary there are idioms which are universal in terms of expression. The international nature of the modern world of business, as well as the interpenetration of languages and cultures at the present stage of development of human society, are fairly considered as a prerequisite for that.

The main objective of business communication is considered to be the realization of aspiration of an individual or a group of individuals belonging to one social institution, to change the situation given in event-driven aspect, as well as to establish a qualitatively new relationship between participants of this dialogue.

The presence of cultural, communicative and pragmatic competence of the participants of business discourse is necessary for normal communication process in business sphere.

Considering the above told, it is possible to emphasize that the idiomatization of business communication occurs owing to the considerable stereotypification of thinking in this field of activity.

Learning mathematics on an exchange program in China: the...

This exchange program was arranged between the Moscow State University of Education (MSUE) and the Central China Normal University (CCNU) in Wuhan city, Hubei province.

In recent years student interaction has been vitally important in modern classes. Teacher-centered lessons are considered outdated as nowadays’ learners tend to get easily bored with traditional...

Learning mathematics on an exchange program in China: the...

This exchange program was arranged between the Moscow State University of Education (MSUE) and the Central China Normal University (CCNU) in Wuhan city, Hubei province.

In recent years student interaction has been vitally important in modern classes. Teacher-centered lessons are considered outdated as nowadays’ learners tend to get easily bored with traditional...