On the Issue of Forming the Linguistic Universals in Phraseology 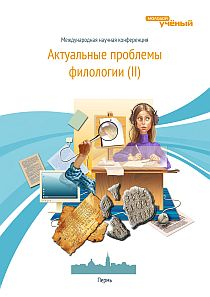 It is idioms where the national originality of a language manifests itself most vividly and directly, since the former correlate with the linguistic reality. Phraseological units (PU) reflect continuous process of development of human culture in their semantics, set and transfer from generation to generation cultural attitudes and stereotypes, standards and archetypes. The research task is to detect universality and national specificity in the world view of different people, since every nation sees the world through the lenses of their own language, and reflect it in their images. The exposure of purely national characteristics of semantics of phraseological units, which pertain to one language, can only be realized in comparative phraseological researches within different languages.

Numerous contrastive and idiomatic studies that aim at detection and explanation of similarities and differences of the units under consideration more commonly come to a particular analysis of some specific phraseological units or their groups and categories which are distinguished by one or another limited feature. Attempts to define broad phraseological universals, to make considerable typological generalizations on basis of the research conducted even on two languages, not to speak of multilingual material, were made by such renowned Russian and foreign linguists as V.M. Mokienko, A.D. Reichschtein, U.P. Solodub and others.

Linguistic universology does not only deal with separate or genetically and typologically connected languages, it studies every language of the world without exception, regarding it as special manifestations of the common human language. Universology is interested in linguistic universals, i.e. general and essential characteristics which are displayed in all or most languages of the world. These characteristics are postulated by a researcher in the form of hypotheses, which are tested afterwards on the empirical material of particular languages. In other words, linguistic universology represents for the most part a theoretical and deductive subject. Most linguists reasonably consider the general language theory to be uppermost the theory of linguistic universals. The linguistic universal is a feature which is detected in almost all languages of the world. A statement (an assertion) about such regularity inherent in human language is often called a universal. The idea of universality of some definite phenomena in languages was never alien to the scholars who had applied to the issue of the entity of language. The predecessors of the research in this area were ancient grammarians. In later times the idea of universals was developed by Jan Amos Komensky, Roger Bacon and others. The term grammatica universalis appeared in the 13th century. When the famous book by Antoine Arnauld and Claude Lancelot “Port-Royal Grammar” was published in 1660, the problem of universals became one of the principal issues in theoretical grammar (nowadays in this case general linguistics is meant). The logical school in linguistics gave primary attention to general characteristics in languages, not taking into account their differences. It was firm establishment of comparative historical method in linguistics in the early 19th century that initiated the attempts to seek for the differences between languages, though these distinctions were explained by diverse ways of historical development of particular languages, various ethnic cultures and national spirits, etc. The interest in linguistic universals awoke once again in the middle of the 20th century due to advances in structural, generative and functional linguistics.

Phraseology represents a linguistic universal: there are no languages without any phraseological units. «Phraseology is a peculiar linguistic universal: wherever there is a language that exists as a communicative means, its functioning cannot but lead to formation of steady word-complexes in it» [6, p. 78]. Universals are formed in a phraseological corpus of any language. This fact is explained by universal thinking, the development of culture and civilization, universal attitudes and categories of being and cognition. Phraseological universals came to languages of many people from historical, mythological, eminent literary sources or originated independently owing to the functioning of mutual mechanisms of human thinking, closeness to living conditions, labor activity, the development of arts and science. The main attribute of a set-phrase which acts as a language unit is universal too: «underivability of a consistent meaning of an idiom from the scope of lexical meanings constituting components of a phraseological unit, from semantic compatibility of these components» [8, p. 57]. The pivotal categories, phenomena, processes, features, etc., inherent in phraseology, are also universal to some extent. They predetermine the formation of interlingual phraseological universality.

An independent formation of phraseological universals in different languages is characterized by partial or complete convergence of both plane of expression and plane of content. This is one of the principal ways of development of universal features in phraseology of the languages under study. The independent development of the given features is based on the same sense of the initial free word combinations and to a considerable degree is determined by the functioning of universals. The same sense of the similar free phrases in different languages occurs in the line of separate or total metaphorical or metonymical transfer and simile.

Universal features of idioms become apparent both in their semantics (plane of content) and structure (plane of expression). Such universal semantic categories as time, space, quantity, degree, intensity, quality and state of subjects and objects are expressed in phraseology of any language. Besides, some universal cultural connotations can firmly be established in semantics of a phraseological unit. They are connected with various realiae of the outside world by means of which a phraseological pattern is formed.

Discussing phraseological universals, U.P. Solodub observed that their presence in languages is caused by the functioning of universals which refer to two main classes: «the linguistic universals and the universals of human existence» [7, p. 35]. The functioning of universals vents in phraseology, first of all, in the plane of content, particularly in the types of semantic transfer (metaphorical and metonymical), resulting in transformation of a free word combination to a fixed expression. The universals of human existence also determine general features of phraseology in different languages, since these features firmly establish the phenomena of objective world and define human activity as of a biological and social individual.

The subject of national cultural specificity in phraseology is fairly conventional. In researches on phraseology (especially if were conducted as part of conventional linguistics) it was, over the years, affirmed that idioms are national specific units of a language that accumulate the cultural potential of people. A peculiar remark by A.M. Babkin is quite appropriate here: idiomatic expressions are «the holy of holies of a national language» where the spirit and originality of the nation are uniquely reflected [2, p. 7].

The national cultural originality of a language is explained by peculiarities of lingual creative thinking and ethnic linguistic specificity of interpretation of the cognizable world. It also accounts for the special features of the secondary concept and categorization, the notions which are reflected in our mind about value-and-sense status of the essential objects. «The cultural national specificity of idioms» is discovered in the possibility to interpret their meaning in the categories of culture, and, which, according to N.A. Berdyaev [3, p. 26], is recognized as national, in fact. Since it is typical of idioms to possess some figurative motivation, «that is directly connected with the world-view of a nation-bearer of a language», they (idioms), in fact, have cultural national connotation [9, p. 214-215].

As quite a large number of cultural meanings are being accumulated in our mind, there is a necessity of their streamlining, categorization and adequate verbalization. This verbalization is caused by system-notional connections which define the sphere concepts of each language. For this purpose lingual creative thinking uses the meanings that are already formed in a language, producing new, derived semantic structures. «Cultural specificity presupposes correspondence between a linguistic unit and an element of mentality or spiritual culture of a community, its history, religious beliefs, traditions and natural living conditions» [4, p. 260-261].

Meanwhile, phraseological system (like any subsystem of a language) possesses a special unity of the general and the particular and from this point of view its research in the light of the theory of linguistic universals presents itself quite pressing and offers new challenges for the linguistics of universals and phraseological theory. «Idiomatic expressions are universal because their components are, at the same time, a threshold value of quantization of continuum and a maximal associative figurative generalization of cultural significant elements of ethnic linguistic mind» [1, p. 156].

The problem of the correlation of cultural linguistic specificity and cultural linguistic universals in phraseology finds various, at times, mutually exclusive, solutions. Eventually, the solution to this problem is found in the course of the general approach to the issue of interrelation between language and culture, prioritization of diverse aspects of the given interaction. It is natural that, for instance, nihilistic view on the acknowledgment of systematic correlation between language and culture leads to complete negation of cultural linguistic specificity of phrasemes. On the other hand, the acceptance of global dominance of ethnic cultural specificity of phrasemes automatically neglects the existence of linguistic cultural universals.

To our understanding, linguistic cultural specificity and linguistic cultural universals are not mutually excluded. They coexist. Such interpretation is entirely conformed to B. Russel’s statement that our knowledge of the world and things (in this case the linguistic knowledge is meant) «consists of the knowledge of two types – when the things are known as certainties and as universals» [5, p. 74]. Universal and ethnic cultural constituent parts are in complementary relations with each other, respectively. Reflecting upon the world of universals, B. Russel notes that this world is «invariable, motionless, exact, admirable for mathematicians, logicians, creators of metaphysical systems and those, who do like perfection more than life» [5, p. 68].

The formation of universals in phraseology is a developing process. It is closely connected with further growth of culture, industry, economy, and other walks of human life. As a result of development in society, some phraseological universals may vanish from language; others appear in a new form.