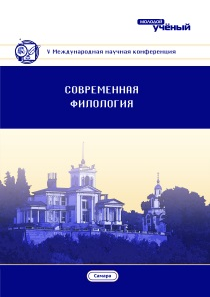 The problem of rendering Gerund in different languages has been the subject of many researchers. Such scientists as: T. A. Barabash, T. A. Zhrajevskaya, L. M. Belyaeva, L. S. Barkhudarov, V. D. Arakin. R. V. Reznik and others contributed greatly to the problem investigation. Usually, the Gerund has quite motivated meaning and also has difficulties in translation. Using of Gerundial phrase is sometimes a complicated and vexed process and that's why the foreign and Russian grammarians interpret it in different ways.

As we have seen in above given example the Gerund is translated into Uzbek by the Uzbek infinitive forms ending -sh, — ish or after the prepositions on (upon) and after the Gerund is rendered in Russian by an adverbial participle in the past. [1–24] For example, the scientist Zhrajevskaya 1 The examples in the Uzbek language are given in the Latin inscription, according to language Law of the Republic gives the following example: After making this statement the minister said he was not going to reconsider his decision.- Vazir o’z qarorini aytib, uni qayta ko’rib chiqmasligini aytdi.

Also Uzbek scientist J.Buranov made a notice: In the function of adverbial modifier the Gerund can be translated by the Uzbek participle (ravishdosh). But there also may be some other variants of translation the Gerund in the function of adverbial modifier of time, depending on word compatibility in Russian for instance a combination of the prepositions with noun: after(on) arriving — after checking. Depending on the prepositions the Gerund is usually translated into Russian by the infinitive or by the subordinate clause. The Gerund with the preposition without is interpreted into Russian by negative form of an adverbial participle with the preposition with noun or by word combination, and by negative form of infinitive. In other cases by verbal noun or by noun [2.170,172]. And translated into Uzbek by participle (ravishdosh) with negative suffixes.

The Gerund in the function of an attribute is always preceded by preposition of and translated into Russian by the infinitive or by noun [1.26] It is also translated into Uzbek by Uzbek infinitive harakat nomi. e.g. Since he became Britain’s Foreign Secretary, he has been insisting on the importance of negotiating on limited practical questions. U Angliyaning tashqi ishlar Vaziri bo’lib tayinlangandan beri, chegaralangan doiradagi muammolarni hal qilish kerakligiga urg’u beradi.

The dual grammatical nature of the Gerund is reflected in the ways of translating it into Russian.

So, the Gerund maybe rendered either by verbal noun or by noun. However, it should be noted in the most cases, the choice of translation variant depends not on the function, but on the lexical meaning, so on the convenient usage of suitable form in Russian [3.111]. In the same function the Gerund may be rendered by infinitive. e.g. The habit of speaking in public. Tinglovchilar oldiga chiqish odati.

The scientist V. D. Arakin made a notice that the difficulties transferring of the Gerund arise only when there is opportunity of double interpretation and it is necessary to decide, whether we deal with the Gerund or with participle. As a rule, the context prompts enough, what function there is the Gerund in the sentence. e.g. He used to bombard the foreign offices with messages protesting against Russian receiving visas. (R.Parker, Conspiracy Against Peace)

If receiving is a participle, the meaning of all complex will reveal so: Protesting against Russian, receiving visas. It is impossible to consider it suitable. The disclosing of the “–ing” form as the Gerund is much convincingly represented. e.g. The English diplomat protested no against the people receiving visa, but against the fact of issue of visa.

Thus, it is necessary to translate: Protesting against Russian the visas were given out The Gerund may be used in various syntactic functions. A single Gerund occurs but seldom; in most cases we find a Gerundial phrase or a Gerundial construction. A Gerundial construction is nearly always rendered in Russian by a subordinate clause, generally introduced by, etc [2.180]. e.g. His being a foreigner, an ex-enemy was bad enough. (Aldington) Uning xorijiy va sobiq yov bo’lishining o’zi yomon edi.

In some cases it is not always easy to distinguish between a Gerund as a part of a compound noun and a participle used as an attribute to a noun. One should bear in mind that if we have a Gerund as a part of compound noun, the person or thing denoted by the noun does not perform the action expressed by the “-ing” form: [4.175] e.g. When the conference of Foreign Ministers deputies was subsequently held, the new formula was used by the Americans to prevent an agreed agenda being drawn up. Alqissa, tashqi ishlar vazir o’rinbosarlarining konferensiyasi bo’lib o’tgach, Amerikaliklarning bu yangi formulasi kelishilgan kun tartibiga halaqit berish edi.

If we consider that being drawn is participle in the function of an attribute, so it should be rendered in this way. It is impossible to consider it suitable. So after analyzing Gerundial phrase or construction we established that the English Gerund is rendered in Russian in different ways. In Modern English language in Gerundial phrases the tendency to elimination possessiveness after a noun and replacement of possessive pronoun by objective, personal pronouns are observed: e.g. I hope you don’t mind me coming? — asked Kit. (J.Lindsay).

The above mentioned tendency may be explained by the fact, that the using of the possessive construction and possessive pronouns is of the dual nature, if the Modern English language norms are taken into consideration; they are aiming at the attributive relations expression; the Gerund is not a noun, but a verb. Besides subject-predicative relations are expressed between the Gerundial complex components, and they are quite different [5–31].

We’ve analyzed the Gerund in Russian translations of the book by C. S. Lewis “The Silver Chair” (19), and “The Lion, the Which and the Wardrobe” (20).

for not liking — не любит,

Let nothing turn your mind from following the sights!

The sound of waves breaking on the store was growing louder

We should say that, after analyzing Gerund, Gerundial phrase or construction we established that the English Gerund is rendered in Russian and Uzbek in different ways.

So, rendering Gerund in Russian is ambiguous and difficult for a student. If the translator followed the rules, the translation should be awkward and in understandable for the reader. By this way we want to give a little our own contribution in the analysis of this problem.