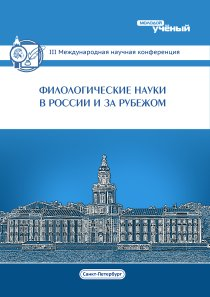 The role of animals in human life has always been extremely high, especially in the early days of mankind, when people and animals coexisted in a natural neighborhood. Animals were included in the social hierarchy of a human society; they seemed to be a special human hypostasis (in animism, totemism, etc.). The inclusion of our knowledge about the fauna in figurative human characteristics is a natural stage in the development of language [1]. In this regard verbs formed from the notion-names of animals (zoonyms) are of particular interest to us. In the linguistic literature, zoonyms are also known as animalisms, zoometaphors, zoolexems, zoomorphisms, comparative phrases with animalistic component, word combinations with component-names of animals, etc.

The aim of this research is to offer semantic verbs-zoonyms classification based on the morphemic structure of a word. That namely means to describe the group of verbs with roots, affiliated with names of animals in English.

English language vocabulary completion at the expense of formation of such verbs occurs in different periods of the language. Most often, this trend was due to the fact that such a derivation helped to denote a specific action economically. That happened relatively to the animal, whose name is used to form a new word.

For example, there is a large number of verbs in the studied group of zoonyms that refers to the notion ‘hunting’. By the means of zero derivation a noun into a verb one can easily get a new lexical unit with the meaning ‘hunting that kind of animal’: to seal — hunt for seals; to shrimp — fish for shrimps; to mouse — hunt for or catch mice; etc. [2]

It is to be mentioned that the most productive way to form animalisms in the English language is conversion. Conversion, also called zero derivation, is the creation of a word from an existing word without any change in form. In the field of animal verbal lexicon verbification typically involves simple conversion of a noun to a verb. For example, to badger — to ask someone to do something repeatedly and annoyingly; to beetle — to make one’s way hurriedly; to hawk — to peddle. [2]

Here we should mention that it is important to distinguish such verbs according to the notion of lexical ambiguity. For example, verb to seal, meaning applying a non-porous coating to a surface to make it impervious, has nothing in common with a fish-eating aquatic mammal. For avoiding such mistakes while carrying out the research one should consult a dictionary.

In Oxford English Dictionary one could find no more than 100 verbs with roots, affiliated with names of animals. As it was mentioned above there is a large number of verbs that refers to the notion ‘hunting’. In this research we have the aim to study verbs with animal names giving meanings other than hunting that kind of animal.

All these words can be divided into following semantic subgroups:

To peacock — to display oneself ostentatiously; to strut like a peacock;

To squirrel away — to save, to put aside, to keep in reserve, to accumulate (verb originates from one of the most notable features of squirrels — their ability to keep the nuts for the winter);

To crow — to express great pride or triumph, especially in a tone of gloating satisfaction;

To rabbit on — to move quickly; to run away; to talk at length, especially about trivial matters;

To cat — to look for sexual partners; to have an affair or affairs;

To swan — to travel around from place to place;

To skunk — to defeat (someone) overwhelmingly in a game or contest, especially by preventing them from scoring at all;

To duck — to move one’s head or body downwards to avoid being hit or seen. [2]

That is the largest group presented. It includes the verbs with the meanings describing practically each moment of humans’ lives.

To hog — to swallow without chewing;

To wolf down — to eat food very quickly, to gobble;

To ape, to monkey — to imitate the behavior or manner of someone or something, especially in an absurd or unthinking way; to behave in a silly or playful way. [2]

To parrot (to cuckoo) — to repeat mechanically. [3]

In this group one can find verbs which meanings are based on adjacency. Such linguistic correlation happens because typical animal actions are transferred to humans’ behavior.

It also happens that during language development not only actions, but also typical features of animals, attributed to them by people, transfer to language usage as separate unites. For example, verb to beaver away means to work tirelessly as beavers are known for building dams, canals, and lodges. To ferret out means to rummage as very keen sense of smell is a typical feature of the ferret. In its turn verb to chicken out means to be afraid of something as chicken is very small and very defenseless.

For example, verb to bull means to buy shares hoping to sell them at a higher price later. If you draw a parallel with fighting bulls, these animals have a certain combination of aggression, energy, strength, stamina and intellect. To bull is often contrasted with verb to bear — to forecast that prices of stocks or commodities will fall, especially to sell shares hoping to buy them back later at a lower price. It is said to be from a proverb warning against 'selling the bear's skin before one has caught the bear'. Verb to kite means to write or to use (a check, bill, or receipt) fraudulently. That’s also an informal term that has reference to financial duties.

To crab means to steer an aircraft or ship slightly sideways to compensate for a crosswind or current. And verb to bat is used in sports, such as baseball, meaning to take in turns the role of hitting rather than fielding [2].

To bug — to conceal a miniature microphone in (a room or telephone) in order to monitor or record someone’s conversations;

To dog — to follow (someone or their movements) closely and persistently; (of problem or bad luck) to cause you trouble for a long time.

To sleuth — to carry out a search or investigation in the manner of a detective;

To hound — to harass, to persecute, or to pursue relentlessly;

To buffalo — to overawe or to intimidate (someone);

To pigeon — to dupe, to cheat;

To fox — to trick or to confuse somebody;

To crane — to hesitate in passing the difficulties;

To quail — to tremble of fear, to be discouraged;

To turtle (to snail, to slug) — to move slowly.

It’s rather complicated to analyze animal words in language corpus. The metaphorical sense based on the relationship of similarity (adjacency) is of particular interest here, i.e. ascription of anthropomorphic qualities to certain animals. English uses animal words in a dazzling array of idioms and metaphors, often nothing to do with actual animals. One should persistently consult to explore this rich figurative language.

Statistical analysis of verbs with roots, affiliated with names of animals in English indicates that only 13 % of all the verbs can be used in professionally specialized fields of life. Such spheres include finances, sports, agriculture, and transport. Other verbs are frequently used in everyday life. Moreover, 54 % of commonly used verbs belong to informal style. Such a widespread use of animal names for characteristic of a man and his actions can be easily explained with extra linguistic factors. Habits and lifestyles of birds and fish, animals and insects arouse certain associations with the appearance and behavior of a person.

It may seem that verbs with roots, affiliated with names of animals, include mostly phrasal verbs. That is wrong. Only 31 % of all the verbs from the studied group (that includes all the verbs with animal names roots) tend to form phrasal verbs when used with preposition. Other 69 % include the verbs that are polysemantic or change their meaning being used in spoken language.

It is an interesting fact that 50 % of all the studied zoonyms attach negative meaning beyond their standard definition. Only 5 % have positive connotation with regards to their pleasing emotional connection, while 45 % of verbs do not possess any connotation and are neutral. These numbers show that the studied group includes the contrasts of a verb with its primary, literal meaning with what that verb specifically denotes. That shows the frequency of how anything may be associated with a zoonym beyond an implied value of judgment or feelings.

So, extra-linguistic reality is especially reflected in the group of verbs with roots, affiliated with names of animals, which is the object of our study. It is reflected brighter than in any other area of language comprehension. Images of animals are endowed, at first glance, by non-motivated properties and sometimes it is even contrary to the logic of things. These images trace back to the depths of the human mind, to its beliefs and mythology.