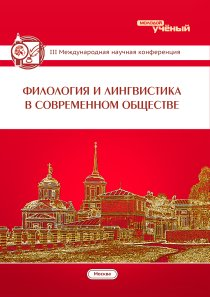 This article deals with the notion of statement of compliment in English culture with a woman as an addresser, and a man (men) and a woman (women) as the recipient.

Researchers who analyzed speech in the context of life and human activity applied to a verbal act theory. Issues of verbal act are included in the linguistic concepts of C. Bally, MM Bakhtin, KL Buhler, W. Humboldt, S. Kartsevskii, LP Yakubinsky and so on. Integrity and development of the theory were developed in the linguistic philosophy under Wittgenstein’s pressure. Interests of researches such as GP Grice, J. Austin, James. Searle, were concentrated on the theory of «speech act» which leads to the fact that the concept of «verbal acts» is one of the central one in Pragmalinguistics [11, 447]. Verbal acts are also the main subjects of analytic philosophy’s study, the basis of what was founded in Oxford lectures in the second half of the 1950s by George Austin. Later his ideas were developed by other scientists such as A. Wierzbicka, GP Grice, J. Leach, J. Searle and etc.

A verbal act is a measurement of linguistic communication. The word «act» is used to emphasize the dynamics, process of an action. If you do not mean a process, the term of a «statement» is often used. Verbal acts are considered to be qualified as realization of proposals.

As it was noted by N. D. Arutyunova, a verbal act is a purposeful verbal action that takes place in accordance with the principles and rules of verbal behavior accepted in a given society; units of social behavior that is considered within the pragmatic situation [5, 179].

M. Halliday considers a verbal act to be «a choice of the only one alternative and a lot of the others linked with each other forming a«semantic potential «language» [9].

According to I. P. Susov, a verbal act is a verbal action for a speaker’s impact on a listener, for the interaction of speaker and listener in the process of object-practical and theoretical-cognitive activity. The text, in his opinion has its ultimate aim to provide exposure, motivation in general [2, 247].

Thus, speaker and addressee are involved in the speech, acting as carriers of certain social roles or functions agreed among them. Participants in the speech have general language skills (verbal competences), knowledge and ideas about the world.

In the theory of speech acts the subject of speech activity is understood as an abstract individual, being a carrier of a number of psychological and social characteristics. Usually, the subject of the speech act produces utterance, oriented on the listener’s perception. The statement serves both a product of the speech act and a tool to achieve a certain goal. Depending on the circumstances or conditions (in which speech act is committed), it can reach the goal and prove to be successful or not, and that will lead to illocutionary failure. Conditions of success suggest that the recipient is able to identify the illocutionary force of the speech act, which must be expressed verbally or non-verbally. In other case, the speaker is expected to fail in communication [10, 78].

In linguistic works of the past decade, greater attention is paid to gender studies. According to the term, the cultural, social, linguistic factors refer to studies that determine not only the society attitude to men and women, but also the verbal behavior of speakers due to their belonging to one or other sex, as well as stereotypes of masculinity and femininity.

A study of the gender dimension of verbal communicants’ behavior has great importance in linguistics because its accounting allows linguists to penetrate deeper into female or male view, and thus better understand the real-life model of the orienting behavior of men and women, as well as the specifics of the male and female voice strategies and tactics.

We will proceed from the following theoretical propositions:

1)        Communicative tactics are «a set of practical moves in the actual process of verbal interaction». It contributes to the realization of the speech strategy and always correlated with a set of existing communicative intentions or goals.

3)        A compliment is etiquette saying and verbally constitutes «highly structured formula that can be applied with minimal effort in a variety of situations requiring favorable comments (interpretation)".

4)        The main function of compliments is to create or maintain solidarity between the addresser and the addressee. Compliments in Western cultures (especially in the American) are so great that they were figuratively but very accurately called «social lubricant».

Overall, communicative addressee strategy in English can be described as a strategy of origin or development of personal existing contacts with recipients, a strategy to consolidate solidarity with addressee, or, in other words, the strategy of establishing and maintaining mutual understanding and agreement with the recipients. Men` and women` different attitude to compliments in Western societies leads to a strategic and tactical differences in female compliments to opposite-sex companions.

The possibility of clear opposition in male and female compliments is explained by Western sociolinguist as theoretical proposition that men and women behave differently in communicative situations [12, 120].

Such differences in the communicative behavior of men and women are the cause of their different attitude to compliments. Based on the assumptions of the theory of politeness (by P. Brown and S. Levinson), we can say that women treat the compliments as the statements of positive comity (statements that demonstrate the unity and solidarity), and for men compliments are statements of negative politeness (a statement providing freedom of action).

Women perceive compliments as a mean of expressing verbal approval or encouragement of behavior which is socially accepted. The British and American middle-classes are expected to take interest in various ornaments, beautiful dresses, stylish hairstyle, explicit interest in family matters and parenting. For a woman to look attractive, wear a beautiful dress and decoration mean to fulfill socio-mediated role.

Men do not believe the compliments are the best mean of expressing the solidarity, so they often verbalize compliments in situations in which their use is prescribed by the rules of etiquette or social politeness.

Compliments to women about their skills come from men of higher social status, having the right to express approval or to assess the behavior of subordinate women (by virtue of the status of superiority) [7, 208].

As for the compliments about appearance, jewelry, clothing, the social status of women-recipients in this case is not relevant. Here it is necessary to talk about the above-mentioned social role of women. Compliments on the jewelry and clothing can be addressed to women of any social status by both men and women [1, 34].

Based on the foregoing, women relation to the compliment and focusing their communicative behavior on making cooperation, we assume that women compliment is a practical move, tactically aimed at implementing the communication strategy of establishing or maintaining contact with the addressee-recipient. Therefore, women in the British lingvoculture while building their compliments should take into account not only the intended subject of the statements, but also the age and social status of recipients.

Communicative tactics of women compliments in English lingvoculture manifested at the level of choice: utterance and language units [2, 247].

For purely female compliments, it is usual a rare use of topics related to female recipients’ family (except their children), their nature and health. In our opinion, this is due to the fact that women avoid giving a positive assessment to companion’s nature and health because such statements can be inadequately perceived by female recipients (as flattery, as irony, or even as an insult) [4, 272].

Compliments about children’s success at school and their talent recognize maternal skill in recipients, what is a direct manifestation of the desire to create or strengthen solidarity with the interlocutor.

More numerous compliments are the compliments about female recipients’ appearance and voice, their personal belongings (clothes, apartments) and professional ability. The most common themes are about appearance and personal things, which usually attract the attention of the sender while communicating with women. As an item of compliments women-senders primarily select the objects which are visually perceived by both interlocutors and the material embodiment of the recipients’ personal taste. Women-senders base their position on that the compliments about appearance are interpreted as verbal expression of solidarity with the addressee:

«I like your dress. I think it's adorable» (I think that it is a charming, delightful). (Collins. Lady Boss).

Woman communicative tactics in the example manifest at the stage of selecting the object of the compliment. Choosing the companion’s dress as the object demonstrates addressee’s excellent communicative competence. As it is known, in the English lingvoculture the utterance can be interpreted by the addressee as a compliment and not as explicit flattery, if it is associated with something, what is positively assessed by both communicants and has great value to the recipient [13].

It is very difficult to determine the degree of sincerity of the sender in the given context. However, we attribute this compliment to the category of sincere compliments proceeding that sincere compliments are more typical to communication between interlocutors, which are relatives or close friends and do not depend on each other morally or financially. Sincerity also indicates informal atmosphere communication situation. In this case, the degree of respect between female-addressee and female-sender should be significant through sympathy and positive attitude [6, 200–207].

From thematic point of view, women compliments for men focus on sender's appearance (50 %), on their professional skills (20 %) and on the personal relation of male-sender to female-recipients (20 %). All other issues account 10 % of the examples.

Linguistic units used to women-addresser are so scarce, that only confirm the formulaic nature of the compliment as etiquette of speech genre.

Among the lexemes used by women for compliments there are some which can be equally distinguished by men and women (good, beautiful, nice, kind, wonderful), and extremely female lexemes (adorable, charming, sweet, lovely, divine). It is very common in female compliments to use adjectives lovely, great. At the same time, the most frequent lexeme in women's compliments is predicate good recorded in 17 % of examples [7, 208].

So, we believe that the women-addressee’s communicative tactics of compliments in English lingvoculture is characterized by several features: dealing with the different genders women cannot ignore the significant differences between men and women compliments; the choice of the priority themes of women's compliments to men; women depend on the different attitude of different sexes mailing to the language as a means of communication; verbalizing the compliments women often have to take into account the social status and age of recipients, the extent of his acquaintance with them, as well as formal or informal communication.