From puzzle to study of reality 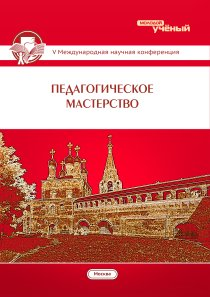 Why do children like to make puzzles? Finding the answer to this question led us to write this article. The answer is it is interesting to see how individual, uncoordinated pieces fit into one image. At first, the child needs help adults who will explain to him how it works. Further, the child learns and begins to act independently.

The same principle maintained in the process of study at school or university. People enjoy when they see as from separate pieces one can get one. It is an incentive, motivation for further study and learns new knowledge. It is necessary to develop a capacity for such vision of objects.

How the study of physics can help in the development of suchlike fundamental approach to things? We present here an example of how to combine scientific puzzle component parts, which are the themes of the various fields of physics. A complete description of the following phenomena can be found in Ref.1.

Circular motion is first identified in mechanics. Kinematics describes a circular motion, without going into details that is its cause. A body moving in a circle has a radial acceleration

. It is directed toward the center of the circle and its magnitude is determined by the formula

-radius of the circle. Later, in the dynamics, determine the source of such a movement. It is a force

that is directed racially towards the center. It holds the body in a circle. The equation of motion of the body around the circumference is as follows

. This equation is the basis of our puzzle.

Next we turn to the components of the puzzle. Chapter gravitation studies motion of a satellite. The trajectory of this movement is a circle, and the source is the force of attraction between the planet P and the satellite S. The equation of motion of the satellite looks like

- the mass of the planet,

- the mass of the satellite and

- the distance between the centers of the planet and satellite. This is the first component of the puzzle. Represent it in the form of a picture

After the mechanics students move to study the next chapter — «electricity». Coulomb's law defines a new force which describes the interaction between the electric charges

located at a distance

each from the other

— charge of an electron and a proton, respectively,

— mass of an electron,

- radius of the orbit of an electron in an atom. Consequently, the following picture of the puzzle looks like

— the charge of a particle,

- the mass of a charged particle. This result is used to create an accelerator of particles, the cyclotron. This last piece of the puzzle can be represented by a picture 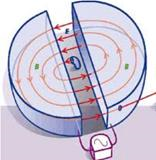 The material presented in the article is studied in the course «General Physics». These courses for students of engineering specialties are taught during two years. The last few lectures of the course we dedicate a fundamental approach, which involves the study of relationships between different physical phenomena. This is an important aspect to have a positive impact on students' motivation.

In perspective we plan to create a course of lectures describing the connection between the phenomena from different fields of science. The task of the teacher is to teach the students to see how the individual pieces fit into a single unit. Here are some examples of drawing up such a «puzzles».