Public and private interest in insurance 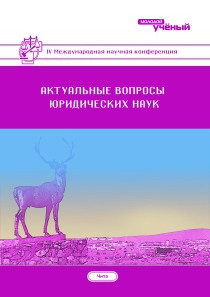 The risky nature of life and production gives rise to a number of economic relations with regard to preventing, limiting and overcoming the destructive effects of emergency situations and other events, as well as the necessary compensation for the damage suffered.

As for Russia, until the end of the 18th century there was no insurance organization in the country: all insurance was carried out by foreign insurers. Only in the 20-s of the XIX century the formation of the national insurance system of Russia began. [1,60]

All these differences have appeared on the basis of the problem of correlation of insurance legal relations in this or that sphere with private or public law.

The basis for dividing private law and public law is that some scholars suggest that the subject matter of legal relationship should be seen: if only physical and legal persons participate in the case, then it is private law, if one of the parties is a state or an authorized body, then it is a question of public law. This division does not reflect the essence of legal relations at all, since the state can act as a public entity, performing its public functions through exercising power, and as a private legal entity that has the same scope of rights and obligations as the person interacting with it. [6,54]

As a criterion for dividing private law and public law, the nature of interest, which is realized in legal relations, is generally reviewed. Secondly, interest can be understood as a set of individual. Thirdly, during the existence of public legal relations, both private and general interests are met. Fourth, the law is to protect both public and private interests.

Some researchers offer a variety of comprehensive approaches to dividing private law and public law.

So, for example, at the same time, the following criteria are placed as the basis of division: the focus of interest, subject composition, method of legal regulation and essence of legal relations themselves (the core of private law is property relations, the core of public law is relations over the organization of the work of public authorities). This approach is very doubtful. A special protest is caused by the last characteristics, since it excludes a huge area of legal relations from the spheres of private and public law.

To date, the Russian law system has seen a marked convergence of private law and public law. The state increasingly enters into civil-law relations, acts as an equal partner, thereby realizing the state's policy aimed at building a civil society and the rule-of-law (vivid examples of this are the development of public-private and municipal-private partnerships, the provision of public services). [7,169]

Some scientists say that private and public law exists objectively in the same way as there are natural rights, the reality of which does not depend on the establishment of the state. In contrast, an opinion is expressed that the division of law is subjective, and the state can shift in one boundary direction or another between the two spheres.

We believe that this change in the border line possibly depends on economic, social, political and cultural conditions that are objectively formed in society, but this should not become an instrument infringing upon the legitimate rights and interests of law-abiding and conscientious participants in legal relations. Even the attempts of such a strong state as the USSR to exclude the whole sphere of private law as a whole were not successful, since it was simply impossible not to recognize its objective existence.

In science, there are several groups of legal relations in the insurance sector:

1) Relations arising in the process of organizing insurance activities in the country;

3) Auxiliary insurance relations are relations mediating material relations, they include the relations for the provision of services related to insurance and arising in the course of activities of such entities as insurance agents, insurance brokers and insurance actuaries.

All these groups of legal relations combine public and private principles. The complexity and heterogeneity of legal relations in the sphere of insurance by its nature and the forms of manifestation predetermines the complex structure of their legal regulation, the use of regulatory methods and norms inherent in various basic branches of law: civil, administrative and financial, to a certain extent, constitutional and international law. No one can argue that legal relations in the field of insurance are subject to the study of both public and private law. [8,72]

The presence of a stable developed market of insurance services is our common interest and interest of the state in particular.

First, the existence of such a market is a guarantee of citizens exercising their subjective rights (for example, the right to health, property, business, etc.). Secondly, insurance is one of the few mechanisms for minimizing various kinds of risks (much broader and more effective than the tools provided by civil law in the form of enforcement of obligations). Active and effective activity of insurers is one of the bases of stability of civil turnover. Thirdly, the insurance industry can be used by the state as a basis for managing financial risks, which in its turn is impossible without state participation in creating the required market institutions, since in addition to the formation of insurance reserves, it becomes necessary to increase the volume of the insurance market, ensure reliable reinsurance capacity, a guarantee fund with public participation and a mechanism for state support in the event of crisis situations.

At the moment, the insurance market needs to change the perception of the development of the industry associated with the active introduction of compulsory types of insurance, and move on to developing and implementing methods to stimulate the interest of potential insurers to voluntary types of insurance. This will raise the insurance status to a new level. Citizens will no longer have negative thoughts hearing the word «insurance”, insurance will be considered as desirable and necessary.

The state establishes certain requirements for the subjects of insurance activity, influences the formation of the insurance infrastructure in the country, thereby organizing the insurance market. Therefore, for the implementation of insurance, reinsurance, mutual insurance, brokering as an insurance broker, it is necessary to obtain a license. The conduct of activities in violation of the conditions established in the license is punishable by law. It should be noted that certain requirements are imposed not only on the insured person, as a legal entity, but also on its official, chief accountant, etc., which is also confirmed by appropriate judicial practice.

In addition, the state determines the parameters of conducting insurance activities by participants of material and auxiliary insurance relations. Some parameters are set by the state imperatively (for example, the size of the authorized capital) and give the insurers the right to choose in relation to others.

So, for example, the state gives the right to determine the conditions under which the insurance contract will be concluded in the standard rules of insurance of the appropriate type, accepted, approved or approved by the insurer or by the association of insurers (insurance rules). It is convenient for the insurer, reduces paper work and is in his interests. However, this possibility of satisfying one's interests should not prevent the satisfaction of the interests of policyholders.

Similarly, the law does not prohibit self-regulation of insurance activities. It means the regulation of the insurance market as a whole or its individual components by the professional participants provided for by law.

One of the public principles in the insurance sector is the establishment of a system of measures designed to ensure that the insurers fulfill their obligations, which is aimed at protecting the interests of policyholders. These measures can be both positive and negative.

Positive measures include state support for insurance. So, for example, the Federal Law «On State Support in the Field of Agricultural Insurance and on Amendments to the Federal Law “On the Development of Agriculture” was adopted. The concept of insurance business development in the Russian Federation assumes that insurance can fulfill its role under the condition of a solution, including the task of combining the market competition mechanism and self-regulation with state measures to regulate insurance support. Although it is regrettable to admit that the insurance industry is not in the focus of the state, as before, insurers face many problems, including in the tax sphere. [9,3852]

Negative measures include the establishment of administrative and even criminal liability measures.

The state exercises state supervision over the activities of the subjects of the insurance business, including by creating a system of supervisory authorities, in order to comply with insurance legislation, to prevent and suppress violations thereof. Control over the activities of insurance organizations is entrusted to the Central Bank of Russia. In its competence, there is the protection of the rights and legitimate interests of insured persons and beneficiaries, recognized as such in accordance with insurance legislation, as well as insured persons for compulsory pension insurance, depositors and participants of a non-state pension fund for non-state pension provision. [10,53]

The state ensures compulsory state insurance in the country. In general, it should be said that insurance as a form of activity of insurers is carried out in two forms: voluntary and mandatory (insurance by virtue of law). Obligatory is insurance, the importance of which is at the level of ensuring the normal life of the whole society and established by the relevant law. Such insurance is subject to a wide range of property interests: insurance of civil liability of motor vehicle owners, insurance of deposits, insurance of damage to their lives or health as a result of clinical studies, etc. Obligatory state insurance, in general, is the life and health of employees and employees of various power structures, as well as their officials. The presence of compulsory state insurance increases the prestige of these jobs, an inalienable guarantee of the rights of the above-mentioned persons whose work is related to the immediate threat of harm to life or health.

To the field of private law, self-regulation of organizations, as mentioned above, the relationship of participants in the insurance market, including the conclusion and execution of insurance contracts, should be included.

Any insurer is a commercial organization, and its main purpose is to make profit, that is why there are often problems with artificial understating by the insurers of the sums of insurance payments. This applies to the sphere of private law only so long as the actions of the insurer do not acquire the character of fraud. In case of violation by the insurer of obligations under the contract, the insured or the beneficiary can use the means of civil protection. However, if fraud is perceived in the actions of an insurer, in addition to protecting his civil rights, a person must draw the attention of state authorities to the commission of a crime with the aim of further punishing the guilty, removing them from the insurance market, preventing an increase in the number of victims of crime and restoring social justice.

5 Men E. The legal nature of the insurance contract under the legislation of the RSFSR on compulsory insurance // Bulletin of State Insurance. -1923. -№ 7.-P.67.

About one multiweight anisotropic inequality of the investment

Popularization of bravery is sacred duty of «Eternal country» youth...

About one multiweight anisotropic inequality of the investment

Popularization of bravery is sacred duty of «Eternal country» youth...