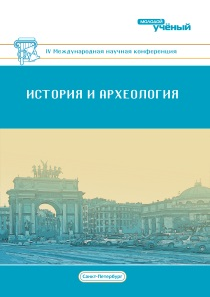 18th century is considered as governance period of three empires in the history of Central Asia, in which Khiva is described as Khwarezm state which believed to have almost the same history of political governance system as its neighbor states Bukhara khanate (emirate) and Kokand khanate.

In Khiva inaqs considered themselves as independent, after obtaining the right to transpose the throne from generation to generation. Avaz inaq’s son Eltuzar (1804–1806) takes away the throne from Abulgazi V who was descendent of Genghis, puppet in the hands of inaqs, had no power in khanate and announced himself as khan in the year of 1804.

Russian orientalist P.P Ivanov writes the following about the origin of Khongirad dynasty: «the founder of this dynasty Muhammadamin inaq belonged Khongirad clan of Uzbeks [1. P. 9].

A lot of information can be found about relations of Khiva khans with Karakalpak and neighboring tribes in the 18th and 19th centuries in the works of Munis and Agahi. According to Munis (1803–1804) Eltuzar under the command of himself attacked karakalpaks who were living near Oyaqish, in the beginning of river Tangriyar and in the desert area of Yarti [2, p. 74].

After coming to the power, Eltuzar led war campaigns against Bukhara emirate that was constantly involved in the works of Khiva khanate. In 1806 war between two khanates ends up with defeat of Khiva and tragedy of Eltuzar, (he drowned in the water). After that, throne was taken by one of the well-known members of dynasty Eltuzar’s brother Muhammad Rahim I (1806–1825).

After the death of Muhammad Rahimkhan his son, Allaquli-khan (1825–1842) came to the throne. There were a lot of mutual conflicts during that period. Allakuli-khan inherited from his father rich exchequer and the country, which had an influence on nearby neighbor states. He attacked neighbor countries several times in order to protect his thesaurus. He attacked Bukhara 7 times and plundered several villages even though there was a treaty between them. Historical data about Russia-Khiva and Khiva-England relations during the reign of Allaquli-khan can be found in the works of Agahi.

Its well known that British colonists campaign «Ost India» sent their spies to Central Asia. Abbot came to Khiva in 1843. He promised to send troops for help to fight against Russians and offered to establish alliance against Russia. Essential information about this can be found in the works of historians such as Agahi and Bayoni. Agahi wrote the following in his work «Riyoz ud-davla» about the visit of Abbot to Khiva: «…in the year of 1839–1840 British ambassador Abbot paid a visit from India» [3. P. 352].

If we take a look at the data regarding this in works of Bayani, Abbot told the following to Khiva khan Allaquli-khan: «Russians… will take over your lands after fifty years. If you wish, you could give us your regions and nobody will touch them. The words that say Khwarezm land belongs to Britain will ensure your safety. We will not cause any harm to you. If you write a letter, we will accept the offer [4. P. 301].» However these attempts didn’t give any results. Khan of Khiva Allaquli-khan strictly rejected his offers by saying:» Russia has not invaded us yet, we do not know what will happen to us after 50 years. We will not give our country just because what might happen after 50 years. Let them do whatever they want after us [4. P. 301–302].»

One of the good things that Allaquli-khan has done is that he built Dichan qala fortress in 1842 in order to ensure safety and peace in the khanate. Agahi stated the following about building the fortress: «in the year of 1842 high and wide fortress was build» [3. p, 153].

Russian historians [5. p, 10] of 19th century explained the establishment of the fortress as the protection from the colonization attempts that could be seen in the constant attacks on Turkmen tribes since this fortress surrounded the old fortress from outside, old fortress remained inside and in local dialect it was called «Ichan qala»(inner fortress). And the city between two fortress walls was called «Dichan qala» (outer fortress) [5. P. 162].

Khan of Khiva Allaquli-khan who ruled the country for 18 years died in 1842 falling ill during his war campaign against the city of Chardzhou. He left 7 sons after himself. He was buried near memorial of Pakhlavon Makhmud that was prepared when he was alive.

After him the throne of Khiva was takin by Rahimquli (1842–1846). Under the reign of Rahimquli there were also war campaigns against neighbor states. More specifically, in 1843–1844 Bukhara was attacked. After spoiled relations with emir Nasrullo special forces were prepared in order to raid the lands of Bukhara. They constantly plundered the lands of Bukhara for a specific period of time [3. P. 397].

The data about diplomatic relations with Kokand khanate can be found in the historical works that were written in Khwarezm in 19th century. For instance, in «1843 on Wednesday, 14th day of Dhu al-Qidah, Rahimquli sent Bobobek to Kokand with ambassador of Kokand Qarabash dadkhah [6. P. 404].»

In 1844, on Friday, 19th day of Jumada al-awwal, messengers who were sent to Kokand, namely Bababek and Yakhshimuradbek, returned to Khiva with the messenger Qarabash dadkhah and gifts from the ruler of that region Sheralikhan» [8. P. 405]. Relations between the Emirate of Bukhara and the Khanate of Khiva are also mentioned in works of Agahi [8. P. 414]. Concerning Russia-Khiva relations of that period, conditions put by Russians rejected by Allah Quli Khan were accepted by Rahim Quli Khan. According to the terms of agreement, the Khanate of Khiva was supposed to closely cooperate in Russia’s trade deals, protect Russian merchants and tax them equally as the natives, and agree to have a Russian representative in Khanate permanently. These terms were accepted and approved by Rahim Quli Khan on February 27th, 1842 [7. P. 113].

After Rahim Quli Khan had died in 1845, Mukhammad Amin (Madamin Khan in Khorezmian dialect) came to power. After he was killed in battle against Turkmens, army, which escaped from Sarakhs, put forward Abdullah (1855, 5 months) as a new khan. However, after about 6 months, he was killed by Turkmens in battle against yamuds and Qutlugh Murad (Kutlimurad in Khorezmian dialect, 1855, 7 months) ascended to the throne of the Khanate of Khiva.

After Qutlugh Murad was killed, between 1856 and 1865 Sayyid Muhammad came to power and after his death in 1865, his son Muhammad Rahim II Feruz reigned. Muhammad Rahim Khan II was one of the khans who ruled the Khanate of Khiva for a long period of time (47 years and 15 days). Feruz, whose real given name was Babajan Tura, was born in Navruz of 1845 in the household of Khorezm khan Sayyid Muhammad. After his father’s death, at the age of 19 Babajan Tura ascended to the throne of Khiva Khanate. While studying the history of this age, it is befitting to split the period of Muhammad Rahim II Feruz’s rule into two stages. The first stage was between 1864 and 1873 when Muhammad Rahim II Feruz ruled as an independent khan. The second period after Russia’s conquer starting from August 12, 1873 to August 15, 1910 consists of 37 years of subjection to colonialism.