Dynamics of immigration to the US and to Russia: a comparison | Статья в сборнике международной научной конференции

Dynamics of immigration to the US and to Russia: a comparison 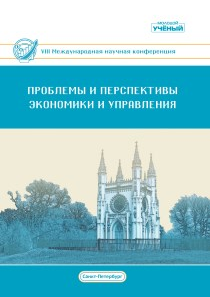 The paper analyzes differences and similarities in the dynamics of immigration to the U. S. and Russia. The main focus of the paper are immigration trends in both countries in the contemporary period of 1992–2017.

1. Overview of immigration to theU.S.

In 1990, President George H. W. Bush signed the new comprehensive Immigration Act. This act was an expanded and modified version of the Immigration Act of 1965. It provided a broad range of immigration visas, including family-based visas, employment visas, and a diversity visa lottery program that let 55000 people from “low admittance countries” immigrate annually to the U. S. [15]. The 1990 Immigration Act initiated the H-1B visa program that enabled U. S. employers to sponsor up to 65000 professional workers per year. The number of international students enrolled in U. S. institutions was also increased substantially. While only 48,486 international students were enrolled in U. S. colleges and universities in 1960, their number climbed to 819,644 in 2012 [15]. The law also created the EB-5 visa, which provided a pathway to a green card for foreign investors who invested at least $1 million in a business in the US that employed a minimum of 10 American workers.” [15].

The Immigration Act of 1990 boosted legal immigration in 1992 to 973,977 Legal Permanent Residents (LPR) per year. In the following years, however, the number of legal immigrants arriving to the US decreased (to 720,461 in 1995, see Figure 1 and Table 1). This decrease can be associated with the resurgence of anti-immigrant feeling, in particular among lower-income Americans competing for jobs with immigrants willing to work for lower wages [4].

In 1996 the US Congress passed the Immigration Reform and Immigrant Responsibility Act, which strengthened border protection and limited the use of welfare programs by immigrants [6]. As a consequence of these new regulations, the number of legal immigrants coming to the U. S. decreased and stayed below one million until 2001 (see Figure 1 and Table 1). In 2001 it for the first time surpassed one million reaching 1,064,318. The influx of new immigrants consisted primarily from immigrants from Asian countries, eclipsing the number of immigrants from the traditional source of Latin America.

After the terrorist attacks on September 11, 2001 the US immigration enforcement was strengthened again and, as a consequence, the number of immigrants arriving in the U. S. dropped to 705,827 in 2003. Yet by 2005 this number again surpassed one million, which could be explained by the booming U. S. economy and contracting Mexico’s economy [11]. From 2005 to 2017 the number of legal immigrants arriving in the US was held almost constant and did not drop below one million per year (see Figure 1 and Table 1).

Beginning with 2017, the administration of the newly elected president Trump started to introduce policy changes aimed to reduce immigration. These changes included building “the wall” across the U. S. — Mexico border, banning nationals of select Moslem countries from entering the U. S., and reducing the quota for refugee admissions. The new policy is primarily aimed at cutting 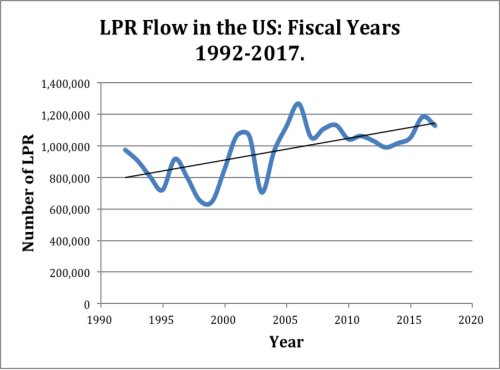 illegal immigration, which was dropping even before President Trump announced his campaign. A study, published by the Pew Research Center, put the number of undocumented immigrants in the United States at 10.7 million in 2016, down from a peak of 12.2 million in 2007 [3].

Immigrant Statistics in the U. S., select years Source: [8]

2. Overview of Immigration to Russia

While the scale of immigration to Russia in 1992–2017 is comparable to that of the US, the origin of Russian immigration during this period was different. Unlike the US most of immigrants to Russia came from countries that were a part of one country — the USSR, which Russia was also a part of. But when the USSR broke apart in 1991, people who came to Russia from any other republic that was previously a part of the USSR became immigrants.

The main incentive for ex-USSR citizens to move to Russia was economic crisis, deeper in most other republics than in Russia. “The transformational recession of the 1990s and a sharp increase in income inequality have brought about massive poverty and deprivation in the region. The extremes of poverty and inequality were reached in countries of the former USSR — countries with the longest history of egalitarian communist economy” [9].

From 2005 the number of immigrants started to increase again (See Figure 2 and Table 2). This increase occurred due to the macroeconomic recovery and to the change in the rules of accounting for immigrants. Starting in 2007 foreign-born people that acquired the permission for the permanent residence for the first time were now counted as immigrants [13]. From 2011 people who are registered at temporary places of residence in Russia for a period of at least 9 months were also counted as immigrants. In the following years, from 2011 to 2017 the registered annual immigrant inflow increased to 589 thousand. 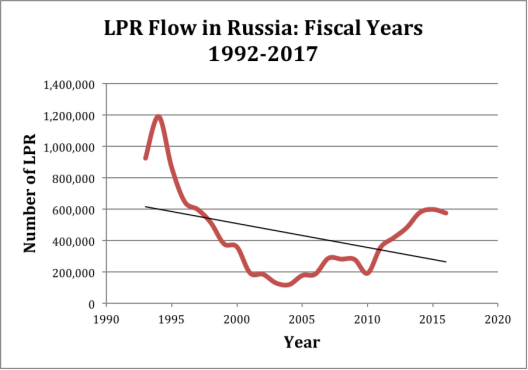 3. Comparing immigration in the US and Russia

The level of annual legal immigration flow to the US during the studied period fluctuated around one million people a year. In Russia it fluctuated at less than half that level (370 thousand). Overall the legal immigration flow to the U. S. has a positive trend throughout the whole period up until 2017. In Russia the overall trend of immigration was decreasing with much wider fluctuations. Here a sharp increase in the number of immigrants in 1992–94 was followed by a no less sharp decrease in 1994–2004. This could be explained, as mentioned above, by the fact that when the USSR broke apart in 1991, all USSR citizens who came to Russia from other republics automatically became immigrants. This is what made the dynamics of immigration to Russia increase rapidly at the beginning of the period and decline again, when the policies of assigning citizenship were revised. 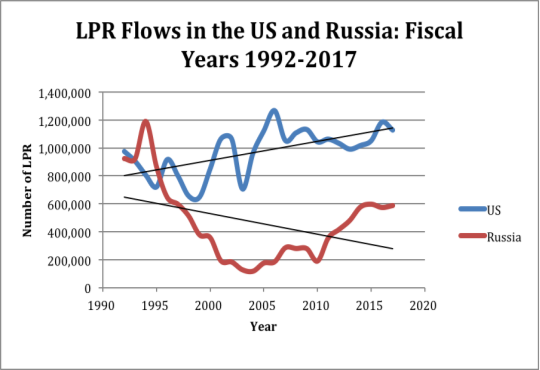 An important indicator of immigrant flows is the net migration rate.

An important indicator of the dynamics of immigrant flows is the net migration rate calculated using the formula: 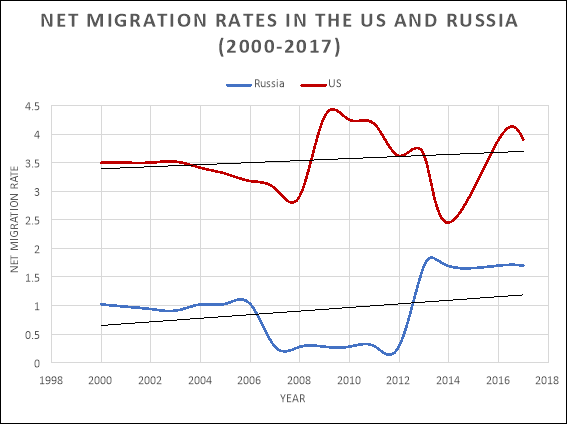 Overall during most of the period of study the dynamics of legal immigration to the U. S. had an increasing trend with about one million immigrants legally entering the country. In Russia during the same period legal immigration proceeded at less than half of that level and had a downward trend. The major fluctuations in immigration to Russia were driven primarily by changes in economic situation in the countries of the former USSR and by modifications in rules of accounting for immigrant population.

During the studied period both countries experienced immigration inflow surpassing emigration outflow. However in the US the rate of net immigration was on average about three times higher than in Russia. Future trends in immigration in the US can change due to the policy of stricter immigration enforcement adopted by President Trump’s administration. Immigration to Russia will continue to be determined by economic situation in the countries of the former USSR.

In our research we study pronunciation problems of Turkmen studients that connected with their interference peculiarites. The aim of our research was to compare English and Turkmen phonetics. To achieve this goal we used such methods as observation, questionnaire and recording test.

Social project planning of the structure of the occupational guidance...

In our research we study pronunciation problems of Turkmen studients that connected with their interference peculiarites. The aim of our research was to compare English and Turkmen phonetics. To achieve this goal we used such methods as observation, questionnaire and recording test.

Social project planning of the structure of the occupational guidance...