Experience in managing monetary policy of Indonesia and lessons with Vietnam 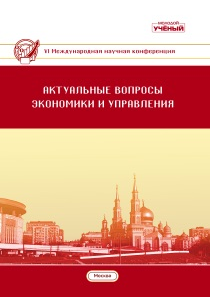 Monetary policy management is always one of the macroeconomic issues that countries are particularly interested in intervening in the economy to achieve economic growth, price control, employment and other goals in each stage of development of each country.

In recent years, the Vietnamese economy has shown a lot of instability. It is expressed most clearly through the inflation rate of Vietnam increased, decreased erraticallyVietnam's inflation is more stable in 2016 (3.24 %) and 2017 (3.55 %), but the growth rate is not high. In addition, the world economic situation has many changes, monetary policies of major countries are regularly adjusted which affects the economy of Vietnam.The issue for Vietnam is to choose a right, flexible, consistent and transparent monetary policy that will enable the economy to grow rapidly and sustainably.

The effect of monetary policy is that many economists point out that it is highly dependent on the ability of policymakers to choose the appropriate monetary policy framework to influence the economic activity and price control. Therefore, in order to select effective mechanisms for managing monetary policy, Vietnam should study and learn experiences in managing monetary policies of countries with many socio-economic similarities with Vietnam. In countries around the world and in the region, Indonesia is one of the countries with many similarities. Indonesia was one of the four most severely affected by the Asian financial crisis 1997.However, Indonesia has overcome the consequences of the crisis and has certain achievements in economic development after the crisis. One of the reasons leading to this success is that Indonesia choose an appropriate policy framework and the monetary policy operating effectively.

In this article, the authors focus on research the experience of managing monetary policy of Indonesia from which to draw lessons learned for Vietnam.

In domestic and foreign studies on monetary policy in Indonesia, there are several studies:

Nguyen Van Ha (2015) studied, analyzed and assessed the current situation and main contents of the reform of the financial and monetary system in Indonesia.This study focused on the experience of restructure the banking system and financial system of Indonesia and highlights the successes, lessons learned and experiences for Vietnam.

Therefore, the above research only mentioned one or some of the contents of monetary policy of Indonesia. The content of the Indonesian monetary policy in these studies has not been mentioned as the main objective of the study. Thus, the study of the authors in this paper is not duplicated and filled the research gap

To achieve the purpose of this study, the author uses qualitative methods with typical methods:

Indonesia's economy is considered one of the emerging market economies in the world. Indonesia is also a country with impressive economic growth after overcoming the Asian financial crisis of the late 1990s (World Bank, 2017). Indonesia is classified as a new industrialized country. In addition, Indonesia is the 16th largest economy in the world by nominal GDP and the seventh largest in terms of GDP (purchasing power parity). The Indonesia's macroeconomic indicators are shown in Table 1.1:

Until now, monetary policy frameworks applied in Indonesia are heavily influenced by the developmental stages of the financial sector (Solikin M. Juhro and Miranda S, 2016). We can see more clearly when studying the Indonesian monetary policy through stages.

– Prior to 1999: Indonesia implemented a policy of monetary policy anchored at a crawling peg rate (Crawling Peg Regime);

– 1999–2005: The Monetary Policy Framework of Indonesia takes the basic money as the target(Base Money); 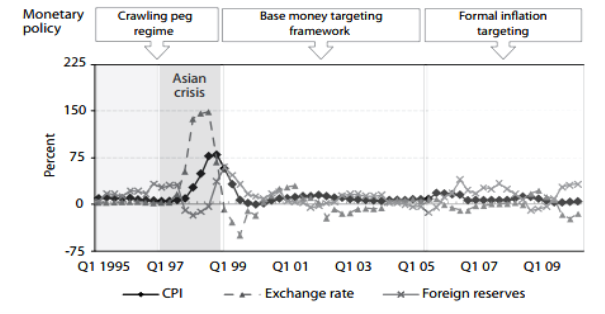 Prior to the deregulation of finance in 1983, Indonesia's financial system was underdeveloped and characterized by financial control. Essential policy components are interest rate ceiling and interest rate management. Bank lending is directly allocated through selective credit control. Accordingly, the Government of Indonesia defined lending priorities for all economic sectors, activities and beneficiaries. In June 1983, the Indonesian government announced the abolition of the ceiling interest rate for all banks and removed most of the interest rate controls previously applied to state-owned commercial banks. These policies are primarily intended to offset the decline in oil revenues, which forces the government to act to promote domestic savings. In addition, the elimination of financial constraints will improve the efficiency of the financial sector and attract overseas deposits. Moreover, abolishing the credit allocation mechanism will improve the efficiency of capital use.

In October 1988, the government continued to introduce strong measures aimed at loosening its finances, notably the reduction of compulsory reserve ratios. Despite, there was significant changes in monetary activity, the objectives of the monetary policy remain unchanged: price stability (low inflation), sustainable economic growth and balance of payments.

The economic and financial crisis that began in mid-1997 has had a more serious, prolonged and difficult impact on Indonesia than in other countries in the region. Pressure on exchange rates and foreign currency reserves during the crisis forced the Indonesian central bank to abandon its crawling peg regime and allow floating Rupiahs in August 1997.The sharp devaluation of the Rupiah is the starting point for the crisis which has led to the worst economic situation in Indonesia in more than 30 years. Real GDP fell by 13.2 % in 1998, in addition to the large-scale collapse of the banking system, corporate bankruptcy and job loss in industries, particularly construction (Halim Alamsyah et al., 2001).

Immediately following the floating of the currency, the Indonesian government passed a tightening monetary policy, raising interest rates aggressively and forcing SOEs to withdraw capital from the banking system and buy value certificates from the central bank. In addition, in order to avoid the bankruptcy and collapse of the entire banking system, the Indonesian central bank has played the ultimate lender role to provide large liquidity to troubled banks. This caused a temporary loss of monetary control at the end of 1997 and early 1998. Therefore, the main objective of the Indonesian central bank was to restore confidence in the currency; inflation must be stopped and inflation must be lowered. 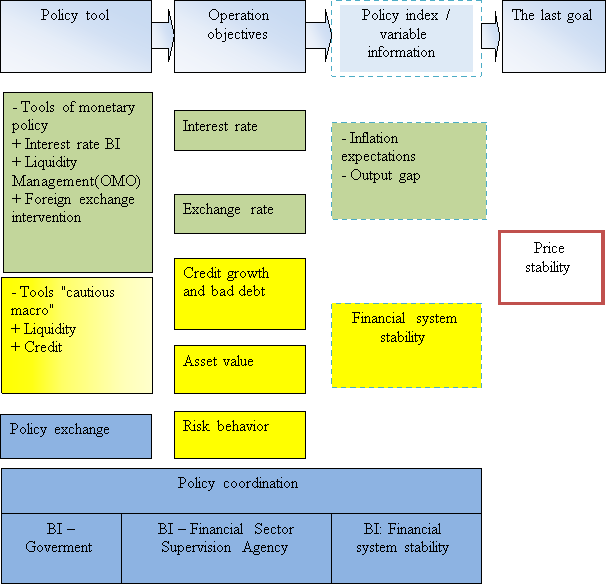 The main monetary policy instruments used by Indonesia since the introduction of inflation targeting are policy rates to influence monetary policy objectives rather than the use of open market operations and reserve instruments which is the key tool in the previous phase. The central bank of Indonesia has set itself a key policy interest rate, with a clear, carefully selected notification effect on the basis of thorough research on the transmission mechanism of monetary policy.

Assessment and lessons learned for Vietnam

The formulation of monetary policy with multiple objectives is also one of the causes of the failed in conducting monetary policy in Indonesia. Because monetary policy objectives may be contradictory, leading to Indonesia's central bank can not achieve simultaneous goals. This also led to a decline in confidence in monetary policy.In addition, volume-driven operations that influence the flow of money have shown delays in achieving goals.And the central bank also showed a lack of control over the total means of payment for M2 when it grows fast. During this period, tools were used primarily as compulsory open market operations andreserve instruments. These tools are primarily intended to curb inflation, which has led to Indonesia's post-crisis economic recovery very slowly. Practices indicate that the use of these tools is inappropriate.

The adoption of the official inflation targeting policy framework in July 2005 has helped Indonesia achieve positive results in terms of achieving inflation, economic growth and stabilizing interest rates and reduce the volatility of inflation.

Beside the efficiency for the economy, in the operating management of inflation targeting policy framework has achieved remarkable achievements as follows:

– Secondly, the central bank of Indonesia has a consistency in monetary policy. Accordingly, the objectives, inflation indexes and monetary policy instruments are clearly defined, specific and consistent throughout policy implementation.

From the experience of operating the inflation targeting policy of Indonesia, we can draw some lessons for Vietnam as follows:

– Secondly, when defining the objectives of monetary policy, Vietnam should set a clear and consistent objective, which should aim at stabilizing the value of the currency as a top priority.

– Third, the experience of monetary policy management in Indonesia indicates that in developing and applying the new monetary policy framework, it is necessary to choose the right time to apply and to set a clear roadmap for the implementation.

– Fourthly, in the process of operating monetary policy, Vietnam should take the initiative in flexibly managing and coordinating the tools and selecting effective transmission channels so as to effectively carry out the impacts of tool to target policy.

– Fifth, Vietnam should closely monitor the macroeconomic situation, monetary market at home and abroad, strengthen the analysis and statistics to timely have appropriate responses.