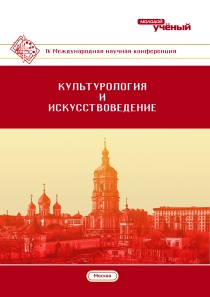 On the basis of historic-archaeological and ethnographic materials have been researched the basic principles of culturological issues of craftsmanship heritage of Sogdiana region in this scientific work. In article were basically investigated the main samples of traditional handicraft and monumental cultural materials of this territory for the Early Iron age period.

In the first of the 1st millennium B. C. goods made from iron started to appear in Central Asia and gradually spread. Having leant the technique of melting iron ore, the human being entered into new historical epoch of the Early Iron Age. The society got an opportunity to advance its technical development which in turn meant speeding up the process of class formation and governmental structure.

Written documents recording the political events in Central Asia have a legendary character till the middle of the 6th century B. C. Records become more authentic when the Central Asian states of Bantria, Sogdiana, Parphia and Khorezm became part of the Achaemenids empire, the first in history to claim supremacy over the countries of the East and the West of the region [1].

In this period craftwork reaches an advanced level. A definite standardisation can be obverted in the shapes of the pottery, which was typical across a large number of Central Asian provinces, especially the cylindrical vessels. These were found in south Tajikistan in the site of Kalai Mir in Qabodiyon district, Khation oblast. Half the construction were excavated during this time and showed houses with several rooms and walls made of red, unbaked brick.

The site of Baitudash IV, situated on the right bank of the Gurdasai River in the Pyandj district, Khation oblast, has been excavated and investigated. The site has an oval-rhombus shape and covers an area of about 10 hectares. The remains of the town walls were preserved on the east made up of four separate buildings, connected with corridors, running from north to south. In some of the rooms there were altars, raised above the ground and in others, set deep in the floor. There levels of the floor were uncovered attesting to the long existence of the structure. It is most probably a building devoted to worship, unique in the territory of Central Asia. The ceramics, found at the time of excavations (khums, chalices, and beakers) allows the dating of the opened complexes to be between the 6th and 4th centuries B.C [2, 3].

Some sedentary-agricultural settlements from the 6th to 5th centuries B. C. were investigated by T. I. Zeymal in Vakhsh valley, appearing in the early cultural layers of Baldaiteppa.

The sites and settlements of this time, to the north of the Hissar ridge, in Sughd oblast, were only recently discovered in 1980. They were investigated by N. N. Mirbobaev. The site of Nurteppa occupies a special place among the excavated ruins. It is situated in Khavotak, which lays in the centre ofloess pebbly hills, which push from the southeast into the golodnaya steppe. As the excavations show, the ancient traces of habitatation in the territory date back to the late bronze age. The layers corresponding to the 6th to 4th centuries B. C. were found throughout the site, which occupied an area of about 18 hectares.

The town, during this period had a citadel and was protected by a fortified wall laid from pakhsa and unbaked brick. The main tyupes of abodes at that time were half-earth houses. The pottery was etched, designs sometimes made using the weave of the textile as a pattern. Together with the bronze objects there were also object made of iron. With all its various phases, the town lasted till between the 3rd to the 1st centuries B. C. seeing during its existence the replacement of dugout houses with houses build on the ground, the quality of pottery was better and iron replaced bronze as the main raw material for metallurgy. In the 1st century A. D., the town ceased to be inhabited, most probably due to lack of water when the spring water ran low [1].

The Achaemenian period was investigated in the various layers of the site of Shirin. In Khujand the investigations pertained to the 6th to 4th centuries B. C., contained in the lower layers of the Khujand citadel (an area covering about 1 hectare) and the remnants of the castle walls, which surrounded the town and citadel (The town had a square layout, about 20 hectares in size).

In this time, in spite of sedentary-agricultural settlements continuing their customary works of agriculture and distant cattle breeding, the steppe and foot-hills regions opened up to the tribes of nomads and cattlemen. The cemetery of dashti asht, situated at the foot of a mountain karamazar in Asht region gives of this (E. D. Saltovskaya, 1966–1976).

In all, the cemetery contains more than 500 cemetery barrows pebbles and sand (0.4 to 1.5.m in height with a diameter from 4 to 12m). More than 250 burials were excavated (including 48 cenotaphs). The burial traditions for children differ only in terms of the location of their graves.

The most ancient group (8th to 7th centuries B. C.) consists of the individual interments in stone coffins. During the 6th to the 3rd centuries B. C., a second group: the collective burial in not so deep subsoil graves. And finally, the third group, the collective and single burials in stone tombs (kurums), dating from the frontier of B. C. till the 6th to 7th centuries B. C. (Though for some interments of these group it is has been possible to establish more exact dates) [1–4].

Accidental findings of the later Achaemenian period include the bronze, almost life-sized, sheep heads, which were found in the Isfara valley in north Sogdiana, and the bronze hollow sculptures of heads and the front of the torso of a wild mountain goat and zebra, which were recovered in Semiganj region in Hissar vallay (North Bactria).