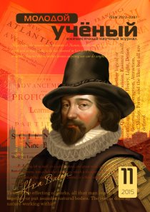 The problem of developing tested estimation methods for unsteady loads, which induce vibration of blade systems and in some cases cause their fatigue breaks, is one of the most important in modern turbine engineering, both in Russia and in the world [1–3].

. The numerical results were compared with experimental data obtained during the study of radial model at St. Petersburg Polytechnic University   [4, 5].

Statement of the objectives and estimation methods

Within the frameworks of this research the following objectives were stated:

-        assessment of levels and features of unsteady loads on rotor blades in a simulation of a turbine blade row under alteration of its modes of operation, characterized by the correlation

-        comparison of the obtained results with experimental data.

Blading section of the model is shown in figure 1, and main dimensions are shown in table 1. Rotor angular velocity was changed from 900 to 1800 rev/min, which changes the correlation

were determined by time averaging of values Pu(τ) and Mz(τ).

Variation ranges of force and torque were calculated using the formulas 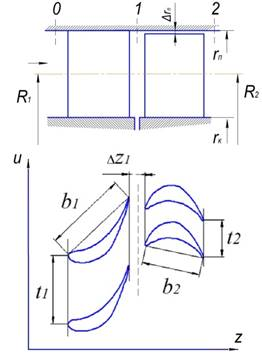 is enthalpy variation estimated according to the formula

The numerical results were presented with varying correlation

Unsteady rotor blade forces Pu(τ) and torques Mz(τ) (at ω = 1300 rev/min) were obtained by numerical simulation and are shown in figure 2. Forces and torques act on rotor blade periodically, with the period of T=9.02 10–4 s. Variation ranges 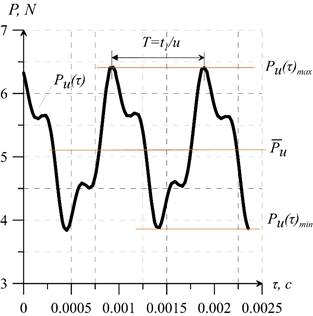 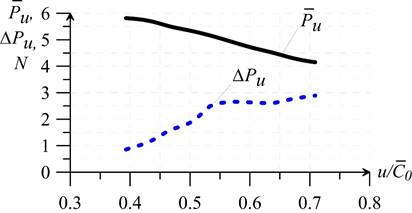 Fig. 3. Correlations of time-averaged force and variation range of force

and range variation of torque

is presented. Matching of alteration trends is noted. The obtained values of relative range variations of unsteady blade forces and torques match with the data [1–3]. Figure 5 also demonstrates values of dimensionless load per unit

), estimated with approximate semi-empirical integral method [4]. General trend of increase of dimensionless load under growth of 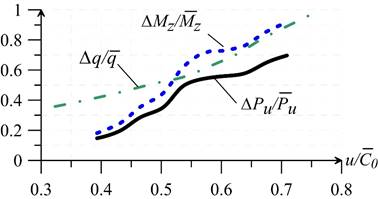 and dimensionless per unit loads Δq/

Dependence of relative aerodynamic force on dimensionless coordinate Δz1/(t1avtgα1av) is shown in figure 6 [6]. This figure explains the high level of unsteady loads under low axial clearance Δz1 = 4 mm or Δz1/(t1avtgα1av) = 0.2 (point A). 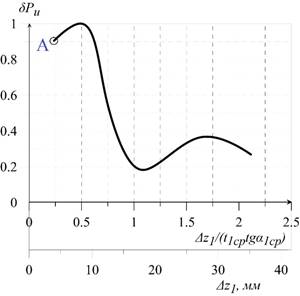