The study of the stars and their energy use is far away dream of mankind. If we consider the notions of Heaven, Earth and Man as a unit, discovering the importance of their relations develops human values and it will become a guarantee for the development of living activity. No one can guarantee the time when we face the difficulties and experience the shortage of energy that we use. Because we understand that there is a limit for everything. All countries of the modern era of globalization may entangle crises and economic instability in all of a sudden. Therefore, in order to find the new sources of energy we need to carry out research work on a regular basis. There are lots of stars in the sky, so much they provide energy. Each of them is a continuous fusion reaction bar. Energy metabolism is a continuous process. We examine the nature of this energy, recycling household needs is one of the great challenges facing mankind. Kazakh President Nursultan Nazarbayev’s request, it says, «should become a country of the green economy» — has become a viable idea day by day. Therefore, the detailed study of the stars and getting necessary energy for life make us research and explore constantly.

Theoretically stars are considered to be a ball of mechanical and thermal balance, and the incompressible gas for a long time. Typically, the surface temperature of stars reaches a few thousand degrees, otherwise in the middle it reaches tens of millions of degrees. The main source of stellar energy is — thermonuclear reactions. Heavier nuclei appear from the light nuclei. In most cases, the hydrogen turns into helium, this is driving huge amounts of energy. In nature the thermonuclear reactions go on the Sun and the stars, considered as their source of energy.

Thermonuclear properties of the Big Star — the Sun. The Sun is the central and largest body of Solar System. The mass of the Sun is more than 333 000 times than the Earth mass; it is more than 750 times from total mass of the rest planets. The Sun is the most powerful source of energy, solar energy usually produce radiation on the specters of electromagnetic waves — from the range of X-ray and ultraviolet radiation. The rays have a powerful effect on all bodies of the solar system: they are heated, affects the planet atmosphere. It gives light and heat necessary for life on Earth. At the same time, the Sun is the closest star to us, unlike other stars, we can observe its round shape; with the help of telescope can study its small particles that lasts about hundreds kilometers. The Sun is a real star, so research will help to understand the general nature of the stars in the sky. Due to the earth orbit being ellipse the diameter of the corner of the Sun changes enough. An average it is 32 or 1/107 radians. So a diameter is 1/107. c., ie, about 1 400 000 km, is more than 109 times the diameter of Earth.

The Sun rotates its axis once every 27 days. It is noticed for the first time in the movement of sunspots on photosphere. This movement changes from left to right in our Northern Hemisphere. The Sun rotation of its axis is inclined it moves about 7.25 degrees angle to the Earth, it will be as the Sun rotate lightly for observers. This scene we can enjoy in September in the northern hemisphere and southern hemisphere in March. The Sun is not solid, it is a plasma ball, its rotation of the Earth is different from other planets.

And compared to the size of the sun and the stars and tens and hundreds of times greater. Many of them have red stars (Betelgeyze, Antares, Tsefeia) is found, and the small red and white stars are among the stars.

For a correct understanding of the features of the design and development of new stars and a new ultra-emphasize the importance of the study of the stars.

Thermonuclear reactions is a very high-temperature fusion reactions of light nuclei. Nuclei close to the merger of their 10–12 cm, which is necessary to their sphere of influence of nuclear power. Such nuclei Coulomb barrier tebilwi approach, only the thermal motion of the nucleus can be overcome only at the expense of the very high kinetic energy. Released thermonuclear reactions calculated energy per nucleon, will be released during the nuclear chain reaction own energy. For example, heavy hydrogen — heavy hydrogen isotopes deuterium — tritium combination is about 3.5 MeV per nucleon energy. In the distribution of uranium is about 1 MeV per nucleon. H. More than 1938–1939 years of classical works (C. Krïçfïld, W. Fowler, K. Veyczekker) of the two fusion cycle of stars in the solar interior — proton — proton (pp) of hydrogen and nitrogen (CN), analyzed in the solution of the problem of the energy of the stars. The first hydrogen or proton — proton (pp) is called.

(Figure 2). It consists of the following reactions.

The core of the hydrogen cycle at the end of the four protons together 2He4.

Where the first reaction in the presence of delicate äserleniswdiñ. Its cross section is very small, for energy protons 1Mév 10–47sm (10–23) apps. Mineral low energy (1.7 keV) protons participating in the reaction section below. Such a control reaction.

The average length of the second reaction 6 h. The third reaction is repeated millions of times a year. When one of these reactions in the solar interior. Therefore, we looked very good ball the length of each part of the cycle does not affect the radiation from the sun and the stars lots of energy. 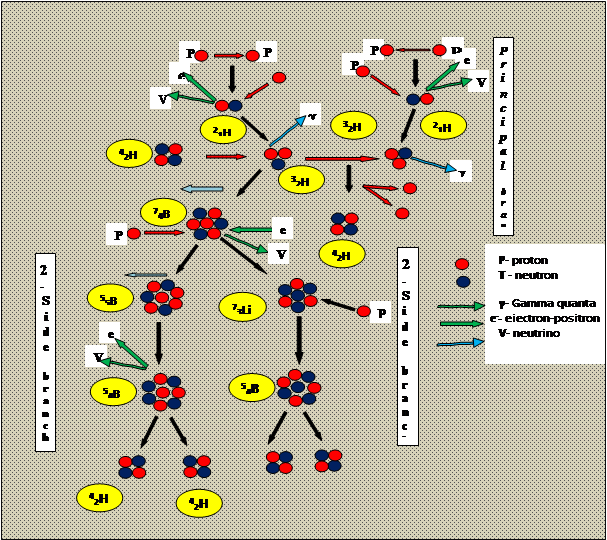 The second is called the carbon-nitrogen cycle by more than [Figure 1]. It is also one of four protons, such as helium, hydrogen-four (H4) completed the formation of the nucleus. There will be two positron and two neutrino. But proton — proton cycle of the products of the reaction cycle: deuteron and helium-three (H3) only participate in the C-N-transmission cycle of reactions involved in the 6C12, which acts as a catalyst to change the number of nuclei:

Proton- proton cycle, reduces the amount of hydrogen in the carbon-nitrogen cycle of the day, 2He4 size increases. But a lot of hydrogen in the day, he is still a million years. After the end of the day on the entire hydrogen compressed under the influence of gravity, temperature and density increases, 2He4 nuclei into heavier nuclei, the reaction begins. Thus fusion transformations of iron (Fe) will take to stop to go to the group [1, 237–238]. 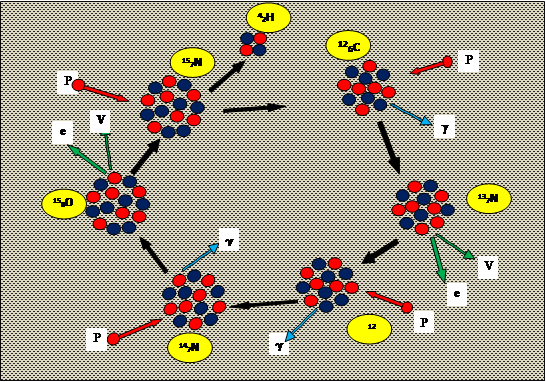 The main point pp cycle consisted of three reaction. The first reaction — beta cause the collapse of the proton Daytona — the whole cycle is unlikely to be the most important and the most difficult for the chain, and very slowly.

Thermonuclear reactions play a key role in the evolution of the universe. The sun and the stars with the name of the radiation energy fusion. Current forecasts, the basis for the development of the first stars formed hydrogen. So high that the temperature inside the star, including the integration of protons reaction is accompanied by the formation of helium. Then, during the merger of two helium nuclei of heavier elements are formed. All of these reactions will be part of the energy production floor, which provides the light of the stars billions of years. To solve the problem of controlled thermonuclear reactions from the use of virtually inexhaustible source of energy for mankind. This is recognized as the most advanced in the direction of the reaction — deuterium with tritium fusion reactions: the reaction is 17.6 MeV. Tritium is not in the nature of the production of lithium in the fusion reactor. Calculations show that, in terms of economic efficiency of the reaction, the reaction is heating things up to hundreds of millions of degrees Celsius from a large density of matter (1 cm3 retail 1014–1015) will be able to walk. Such temperatures can be obtained through the creation of a powerful electric discharges in plasma. The main problem in this area in such a high-temperature plasma unit to maintain for 0.1–1 h. The walls of any substance that can not be used here because the temperature is so high that they will die immediately. To maintain limits the amount of high-temperature plasma is one possible method is to use the effect of a very strong magnetic fields. But still would not be possible to solve this problem as a whole plasma instability. This instability of charged particles in the magnetic part of the «wall» in the lead diffusion. At the present time, in the next 10–20 years, fusion reactors are made with confidence. For controlled thermonuclear reaction has achieved great success in the way scientists. This work L. A. Arcïmovïç and MA Method started under the leadership of conduct and continue their followers. So far, only explosive controlling the synthesis reaction in the form of hydrogen (or fusion) was achieved at the expense of bombs. Capable of solving the problem of controlled thermonuclear reactions implementation of human energy. Hydrogen bomb controlling fusion reactions can destroy mankind. 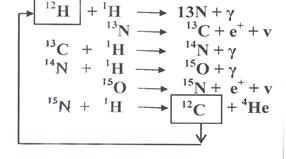 Figure 3. CN-cycle of the output energy of the stars

Hydrogen is the main component of stellar structure, will be filled during the synthesis of a large nuclear energy, the stars will be mainly through the combustion of hydrogen glow and energy. This is obtained by the chemical formula can be seen in Figures 3 and 4.

The temperature in the middle part of the 10–15 million stars. K-to increase the kinetic energy of the hydrogen nuclei to collide with the Coulomb win tebilwdi appears from the reaction of the combustion of hydrogen and nuclear energy, which is distributed on the basis of their energy.

Big changes in pressure and temperature range and temperature stars as the amount of 6–7, and the pressure goes up as the amount of 18–20. At the same time, where gas and distribution of energy in stars having a positive effect with a new generation of thermonuclear reaction. Therefore, we research the stars and interstellar gas received by the status of the main characteristics of the logarithmic formula approximation calculations.