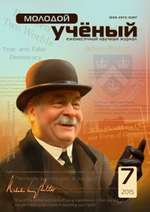 The study performed reveals that a number of food-connected nonliteral terms in the English language establish and verify a link between the person’s food preference and individual attributes: character, mood, behavior, cognitive function.

The origins of a number of English food nonliteral terms characterizing a person are unclear and debatable. Etymologists have come up with various theories of possible origins, some of which are hardly plausible, because they are based exclusively on metaphorical interpretation, similarities and symbolic logic. Meanwhile, the idea that food can influence our behavior is voiced not only in the popular saying «you are what you eat» (which is defined as follows: «your character and your physical health are decided by the kind of food you eat» [7, p.436]), but it also comes through in food nonliteral expressions, e.g., the ones that contain comparison: to be as cool as a cucumber, to be keen as mustard. The definitions of various food idioms present evidence in support of the idea that food can affect mind through the body, suggesting, for example, that people who are full of beans are more extraverted and enthusiastic, because they are «full of life and eagerness» [7, p.101]. Up to the present day, clinging to the conventional wisdom of the long-established idiomatic language, English speakers believe that people, who cook their goose, «get into serious trouble» [7, p.303], and those who chew the fat, typically gossip over beer [7, p.230] and can’t bear fruit [7, p.102], and if the goose is cooked and humble pie is eaten, there is no possibility of success [7, p.685].

Nutritional theories about a person’s compatibility with a certain type of food according to the physical or mental condition he/she is in deepen conventional understandings of the food-related nonliteral expressions. Nutritional scientists that focus on physiological, biological and (lately more often than before) on psychological aspects of foods can help affirm the validity of such expressions.

To go bananas and to go nuts mean to become crazy and out of control with anger or silliness. The origin of the expression is elusive. A popularly suggested origin is that the phrase comes from the similarity with the monkeys’ wild behavior when they are shown their favorite food [10, p.153]. But one should not forget that what feeds the body, also feeds the brain. Bananas and nuts are considered to be the ultimate brain food. A human body uses healthy fatty acids, vitamins, and amino acids in bananas and nuts to regulate mood, to help us stay calm and focused [6]. Therefore, it’s good advice to engage in eating brain foods, that is to say one should go (enjoy) bananas, walnuts, almonds, and pistachios in case of psychological unstableness. The expression to go bananas / nuts can be rationalized as euphemistic, as it camouflages the fact that someone has gone mad by providing reference to what is advisable in order to alleviate this mental state.

To have a bun in the oven — this popular euphemism for pregnancy bears analogy to the unborn baby in the mother’s womb [10, p.172]. But it is not just a bun metaphor. Researchers say that around the fifth month of pregnancy expectant women experience the urge to nest — to organize their home and prepare it for the birth of the child. It is a primal instinct that forces some women to become homebodies obsessed with house chores [2]. Cooking is part of the nesting instinct. Baking something yummy is the right way to create a cozy atmosphere in your home. Home-baked food is comfort food. It brings warmth to the soul and creates a comfortable sense of «home». Preparing and eating such food can relieve emotional stress and it also triggers positive emotions in mothers-to-be. To sum up, if a pregnant woman exhibits nesting behaviors, she is likely to have buns in the oven that will heat up her home and fill it with delicious cooking scents.

To take with a pinch (grain) of salt today denotes the ability to think critically and be immune to lies. It is believed that this expression emerged because a pinch of salt can help swallow tasteless food [10, p.359]. What should be taken into account here is the fact that salt is critical to the brain development. It provides sodium chloride that is essential for the growth of the brain and the ability to question, analyze and examine issues, problems and people [1]. When babies are born, they don't react to salty taste like they do to other tastes, such as sweet or bitter. Through the first several months of life, either the infant is indifferent to or rejects salt. But by the age of six months, babies become capable of registering salty taste [12]. In other words, as they start to mature, toddlers develop a clear preference for salt that seems to them even tastier than sugar, because their brain has to learn to perceive reality with a pinch of salt.

Cake-eater is defined as «an effeminate lover of ease and pleasure» [4]. Cakes are full of refined sugar. Eating it results in a serotonin surge. Serotonin is necessary to maintain a happy mood, to reduce anxiety, and it also helps us sleep. But the effect is only temporary, as serotonin levels crash after a short while, causing new cravings for something sugary, leaving the cake-eater even more depressed, sluggish, unfocused, and unable to perform well mentally [8]. Apparently, Marie Antoinette wasn’t thinking straight when she was told that her subjects were starving and she allegedly replied, «Let them eat cake!» [7, p.186, 857]. The body drags the mind down. Thus, the popular expression «shut your cake-hole» [11, p.605] can serve as a linguistic reminder that someone talks nonsense because of their indulgence in sugary stuff, which causes their brains to crash.

Egghead — this derogatory term for male intellectuals may well have originated in reference to the popular image of an academician with a high forehead and receding hairline [10, p.118], but there have been studies to confirm that many essential nutrients (e.g., protein, glutamine, cysteine and choline) found in eggs boost intellectual activity by improving attention and long-term memory [3,9]. Eating eggs in moderation keeps the brain healthy and helps prevent mental disorders, which adds new meaning to the term egghead.

Salad days — the term is traditionally clarified to represent a time of youth, happiness and prosperity. The character of Cleopatra from the Shakespearean play Antony and Cleopatra used this word combination for the first time when she uttered: «My salad days, when I was green in judgment: cold in blood…» Etymology experts believe that by «salad days» Cleopatra refers to a time not when she ate salad, but when she was like a young plant [10, p.308]. But it isn't just a salad metaphor. What might William Shakespeare think when in the 17th century he coined the term «salad days»? Apparently, he was familiar with the writings of the ancient philosophers who believed that food not only influenced personality, but could even change it. Nutritional theories of the ancient Greeks suggested eating cool salads with oil and vinegar to balance conflicting moods and to become mentally sharper [5]. By referring to salad, Cleopatra uses the word «cold» to hint that her youthful affair with Julius Caesar was pure calculation, and she uses «green» to indicate that it wasn't until she met Mark Antony that she learned how human rationality and calculation yield to passion. To Shakespeare’s mind, younger Cleopatra wasn't naïve, innocent or silly, but she could indeed have preferred salad over other foods, which maximized her sharpness and alertness, hence the expression «my salad days».

In conclusion, the analysis of some firmly established interpretations from nutritional perspective breaks new ground in understanding how food nonliteral terms reflect the objective reality. The English food expressions discussed above, are judgments about people based on their eating habits. They decode people's food preferences. Regardless of their origin, these food-related nonliteral expressions present knowledge proven by science about the interconnection between individual eating pattern and personality.

Higher levels of IGF-I and adrenal androgens at age 8 years are associated with earlier age at menarche in girls. J ClinEndocrinolMetab. 2012;97(5):E786–90.

The new immigrants came to the United States from all parts of the world, but several categories of immigrants stand

The roots of this situation are to be found in the extralinguistic history of the USA.

Higher levels of IGF-I and adrenal androgens at age 8 years are associated with earlier age at menarche in girls. J ClinEndocrinolMetab. 2012;97(5):E786–90.

The new immigrants came to the United States from all parts of the world, but several categories of immigrants stand

The roots of this situation are to be found in the extralinguistic history of the USA.