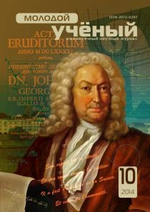 One of the most important social tasks is to provide each family with individual housing which leads to an increase in construction products. As stated in the handbook of critical technologies and promising areas of science and technology of the Russian Federation, one of the most promising directions is «Development and implementation of standard electronic formalized models providing analysis and reengineering of production processes ". For the development of electronic models organizational and technological model of construction should be used in the form of detailed schedules subject to operational variant regulation.

According to [1, 2, 3] schedules have been used since the last century in the form of a line graph, proposed by F. L. Gant. In the mid- 30s A. I. Nerovetsky and S. M. BUDNIKOV offered a new form of the timetable — the cyclogram, and at the end of the 50s J. E. Kelly and M. R. Walker put into practice Works directed graphs — network diagrams. Currently, the most progressive method of scheduling is the line method. In the practice of mainstreaming of construction there are different formulations of the problem of Calendar Planning, which according to the classification proposed in the works of V. A. Afanasiev [4,5] differ in composition of initial data, constraints and structure. There are authors [6] who are considering construction crew as the organizational structure with the constant number, qualification and professionalism. In such cases, the team will perform work only on objects of the same type with the same structure and the volume of work performed. [7] provides one of the mathematical models, which addresses the complex task to consolidate teams to objects, ​​minimize inconsistencies resulting from the difference between the need for workers with their actual presence. This paper does not consider planning team (dividing it into Complex and Specialized teams) and especially in the work units, which means absence of proper Labour Organization.

Thus, from the above publications it can be concluded that not all aspects of managing by workers and work units in the complex teams were studied.

Hitherto with the Calendar Planning of construction works it is hard to find the size of labor and technical resources needed to carry out the work [8]. Equally complicated task for managers is to determine the minimum required amount of resources to perform the work.

Development of construction schedule and timetable of resources with the proposed method.

Object building is 22 -story brick house in a residential complex «My City». It is a rectangular building consisting of 2 sections, with overall dimensions of 55,30 x16,90m. Structural system is cross — wall type with transverse and longitudinal load-bearing walls. Object address: Leningrad region, Vsevolozhsk district.

Based on the method of calculation to determine the quantitative composition of the integrated brigades:

-       Number of workers by occupations

where Mc is normative number of shifts when lifting prefabricated structures;

Cp is the time of performance of work according to the original schedule;

O is quantity (volume) of output;

DH is the normative labor brigade as a whole;

T is Work hours (time spent on production of a given amount of products);

Chs is working hours per shift.

According to the above formula an integrated team of installers should work in shifts.

Strength of the team is people per shift, three shifts is 60 people.

Distribute human resources along the work units as specified in Table 2.

When optimizing the original schedule shifting of workers of noncritical work to those of critical work is made. There is a direct relationship between human resources and time. Using mathematically grounded move of human resources, implementing time reserves for simpler work we shorten the duration of critical works. Transform fragment of bay from timetable in Figure 1 to network. Estimated parameters of network schedule are provided in Table 3. 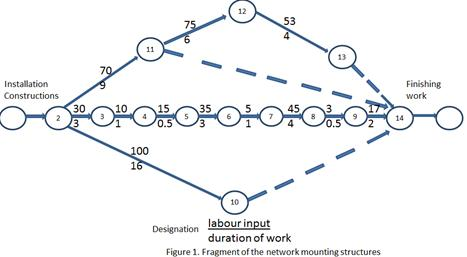 The most effective solution of reallocation of resources can only be achieved with due regard to the ratio of intensity of noncritical work, from which resources are removed. The largest coefficient indicates that the period of execution of this work compared to that of other uncritical work is tighter. Find that the critical-path length is 160 hours. As a rule this path is to install structures. There are three non-critical paths, these are associated works. Ratio of hard work time and time reserves are shown in Table 4. Due to these reserves installers’ team may be strengthened and hence the critical path is reduced.

According to the original schedule the following composition of integrated team is provided. Allocation of labor along the teams Table 5

Composition of integrated team of installers per the initial schedule

Team of installers of structures consists of 12 people, work allows to strengthen team of installers of each shift with up to 7 people, thus increasing the overall composition of team to 21 people. According to the original timetable duration of installation work is 65 hours, and with increasing of assemblers to 21, work is reduced to 37 hours thereby reducing the estimated reserve of time of each team by 65–37 = 28 hours. Reserve of time in the team of insulators is 80–28 = 52 hr, or 65 % of the duration of work. Thus, the number of workers in the team can be reduced to 6 x 0.65 = 3 people. Reserve of time for concrete workers and plasterer is 92–28 = 64 hours, or 69 % of the duration of work. In a similar way we determine that the number of workers in a given team can be reduced by 26 x 0.69 = 18. Considering the rate of redistribution of resources integrated team structure according to optimized network schedule is shown in Table 6.

Composition of integrated team of installers according to optimized schedule

Having defined duration of work based on the new number of teams, we develop optimized network schedule.

Development of modern methods of modeling of the plans of construction and installation works, methods and algorithms that help effectively make the optimization of resource allocation is an important and urgent task.

Due to sealing of working time and best use of reserves of time, the construction period is reduced; elaboration and wages increase.