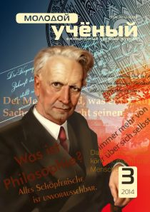 The Institute of the Service Sector and Entrepreneurship (Branch) of «Don State Technical University» (Shakhty, Russia)

The article deals with the problem of social rehabilitation of a disabled child in the context of social changes in modern society. We analyse the prospects for the success of this process. The authors draw attention to the fact that the solution to the problem of socialization and re-socialization of children with disabilities is one of the most pressing problems of our time that requires immediate attention.

«Children have neither past, nor future. They simply enjoy their present unlike us, adults»

The impact of social practices on the person in the sphere of social work is complex and multifaceted. Particular attention is paid to the processes of adaptation of children with disabilities and their successful socialization. Currently, the research in the sphere of social rehabilitation of disabled children is complex and structured. Different areas of scientific knowledge draw attention to this problem that is by its relevance one of the most urgent ones and requires searching for the most productive ways to solve it. The scale of the problem became more acute in our country in the late nineties and attracted the attention of prominent sociologists, educators, psychologists and politicians.

The process of social adaptation of children with disabilities is the problem of formation and development of the individual in society as an equal and free person able to lead normal life among healthy people. It has recently acquired special importance due to the fact that in the new millennium with its rapid progress, the development of technology and the entry into a new era of post-industrial society it is possible to change our attitude to people who are in difficult life situation and to implement social assistance and their progressive integration into modern society as fully valid members. And this is the problem that has been pursued by social scientists throughout the history of human civilization. It affected the fundamental concepts such as charity, mercy, kindness, humanity and tolerance and can not leave us indifferent to ourselves and to the current dismal situation in the modern world.

The purpose of this paper is to define and analyse some aspects of social rehabilitation of disabled children through the evaluation of the impact of social technologies on the implementation of safe socialization and constructive re-socialization of children with disabilities.

To study the essence of the problem it is necessary to define the basic terms. The term «adaptation» translated from Latin literally means «fitting», «adjustment». Initially, the term was borrowed from biology where the adaptation means the adjustment of the organism to external conditions in the process of evolution including morpho-physiological and behavioral components. From a sociological point of view, in this context, we propose the following interpretation of this concept referring to the ideas of the researcher YA Urmantseva: «Adaptation is an adjustment of the characteristics by the teleobject-system to the peculiarities of the environment for the realization of the specific objectives within this environment» [1, p. 36]. In other words, we can understand the adaptation both as the adjustment to the environment through the adoption of its specific features and the process of inculturation that is the process by which a person adapts to and assimilates the culture in which he lives i. e. entering human culture by a teleobject-system through the adoption of social norms in order to realize personal aspirations.

Scientists point out that “teleobject-system” means absolutely any object that is active, determined and able to self-adaptation process by creating the conditions necessary for its implementation in relation to the objectives and characteristics specific to this object and to the environment [2, p. 4]. Adaptation is an integral part of the effective socialization of any person and his or her entry into the community as a fully valid member. But the psychological aspects and fear to feel unwanted and alien make children with disabilities undergo a process of de-socialization. When an individual loses certain social values and norms this process is often followed by his or her exclusion from a particular group or society as a whole. Thus, the child loses links with society, alienates and withdraws into himself or herself. In such a situation social workers, psychologists, teachers and professionals working with children with disabilities should initiate the process of re-socialization i. e. repeated socialization immediately.

Psychologists identified four main types of adaptation of the people with disabilities to the community. The first is an active-positive type that is the type of people with disabilities who seek the way out of negative life situations; they have a positive attitude to life, rather high self-esteem, enthusiasm influencing others, vitality and independence of thoughts and actions. The second one is the passive-positive type. The people of this type have rather low self-esteem. They are quite satisfied with the current state of affairs that exists in their life for today, for example, the overprotective care of relatives who meet all their needs with the help of the rest of the family. Therefore, they are generally positive and peaceful, but not active enough to change their life and fulfill themselves through art, sport, etc. The third is the passive-negative type; the people of this type are rather dissatisfied with their own position and at the same time have no desire to try to improve the situation. At the same time such people have rather low self-esteem, the cautious attitude to the surrounding world, the constant expectation of a dirty trick or a new trouble. And the fourth type is an active-negative type. The psychological discomfort and dissatisfaction with their lives is combined with a belief in the possibility of changing their lives for the better, but not by their own efforts but with the help of someone else, for example, the state or parents. The type of adaptation of the child with disabilities depends on the child's immediate environment, his or her agents of socialization and, of course, on the key values of the society he or she lives in.

Each state has different approaches to resolving this problem due to various political, socio-economic and psycho-pedagogical conditions. Thus, according to E. I. Kholostova, a typical example in this respect is a comparison of two systems of social welfare — European and American. The social system of the European continent was influenced by the collapse of existing bonds in the community, which entailed the weakening and in consequence the lack of support for those who need it from the immediate environment. In America, however, the emphasis was shifted towards self-reliance, personal initiative and independence. Thus, the system is free from the influence of government agencies. For example, to a certain extent, we can regard the Declaration of Independence of the disabled people as a result of the success of rehabilitation of disabled people in the United States. The so-called Independent Living Centers that have become widespread not only on the territory of the USA but also in Britain, Russia, Canada and Sweden are of great importance. [3]

On the territory of our country the solution to the problem of adaptation of children with disabilities is badly needed. Many experts have been working on the creation of innovative techniques designed to socialize disabled children with the members of the society. [4] An example is the so-called «Play therapy» developed by the Institute of Personality Development with the participation of G. I. Reprintseva, which is applied for the prevention and correction of neurotic reactions, fatigability and abnormalities in behavior and communication among the children of this category. «Ringo-hope» is a technique which is widespread abroad. It was developed by Russian scientists. One of the authors is L. E. Argun who is the Honored Worker of Physical Culture of the RSFSR, HonoredMaster of Sportsof theUSSR. He is the author of many scientific works, techniques and books on physical education for teenagers and children with disabilities.

The problem of social protection and rehabilitation of children is permanently under the control of federal and regional authorities of Rostov region. «Dobrodeya» is a rehabilitation center that makes an important contribution to the common solution for the problem of adaptation and socialization of children with disabilities. It is located in the Cotton Textile Combine raion in the town of Shakhty. Disabled children who suffer from cerebral palsy are provided with specialized assistance. Medico-social patronage is successfully implemented to teach parents to the methods of rehabilitation of the child at home as well as social and psychological patronage for family relationships correction. The center also provides consultative assistance: informs parents about the entitled social benefits and familiarizes them with the laws and normative documents that stipulate all sorts of social assistance and support for children with disabilities.

The rehabilitation center «Dobrodeya» gives teenagers the opportunity to determine their aptitude for a particular type of work and encourage them to make the choice of a future profession that will be in accordance with the individual talents and abilities. It offers pre-professional training in the following fields: «PC user», «Tailoring», «Hairdresser». Children learn the basics of computer science and take the first steps in the world of computer communications in the computer room of this centre. Because of the close work of the center with the Institute of the Service Sector and Entrepreneurship (Branch) of «Don State Technical University» children received IT training and obtained «PC User» certificates on the basis of the Institute.

The Psycho-pedagogical rehabilitation department offers training on vocation-related subjects for children in primary and secondary schools including IT, Handicraft, Music and Choreography. The experts of Psycho-pedagogical department offer corrective psychological, therapeutic treatment, speech therapy and other forms of assistance to children and adolescents with cerebral palsy. The Medical and Social Rehabilitation department administers treatment of CNS affliction, the musculoskeletal system at all stages of recovery period of the development of the disease. The treatment is carried out by experienced specialists: neurologists, an orthopedist, a pediatrician, a physician, a physiotherapist, a reflexologist, a physical therapist, an otolaryngologist, a psychiatrist, massage therapists, physical therapists and nurses. Medical care is provided around the clock.

In the Center much attention is paid to the ethical, aesthetic, environmental and other types of education by means of different forms of cognitive activities — games, quizzes, contests, drama, holidays, festivals, etc. All the modern equipment is at the disposal of specialists: apparatus, fitness equipment and technologies effective in the treatment of the musculoskeletal system diseases such as SCANNER-therapy, «MILTA», suits «Adele», «Graviton», Gross simulator, therapeutic blanket, whirlpool baths, underwater massage, vacuum massage, solarium, etc. There are two rooms for physical therapy (conductive and mechanical therapy), light therapy, thermotherapy, hydrotherapy, a treatment room, a swimming pool with sauna, a solarium, a garden and a herbal tea bar. All the departments work in close cooperation with each other. It allows to create a consistent complex of corrective actions and to receive targeted positive results thus improving the quality of life for children with disabilities.

Thus, having defined the scope and specificity of the processes of social rehabilitation of disabled children we can conclude that in modern times much work is being done to solve the problems of children with disabilities and the results are being implemented in the field of social work through the use of modern social technologies that can help motivate children with disabilities to pursue and reach theirgoals being full members of our society.

In the United States before the appearance of data.gov, the Sunlight Labs and Knights Foundation were existed, it extracted data from the reports of Congress, converted

In the United States before the appearance of data.gov, the Sunlight Labs and Knights Foundation were existed, it extracted data from the reports of Congress, converted