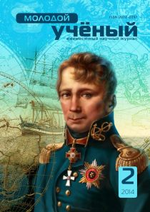 The authors propose the modernized feed circuit of hydrostatic bearings of crankshaft of internal combustion engine. On the basis of the comparison of variants of feed the authors define a scheme which provides a minimum shaft deflection in bearing under load and increases the reliability of the hydraulic system.

Actuality of research theme. It is known that in the process of the internal combustion engine under load, the forces that move the crank relative to the axis of the hydrostatic bearings that lead to the deterioration of indigenous necks of the crank. This work [1] presents a modernized system adjustment crank in hydrostatic bearing, which provides the impulse of supplementary amount of fluid in the pockets of the hydrostatic bearing in time of stress on the shaft using the automatic control systems. Therefore the study of dynamic characteristics of the new system is the main task, which allows to compensate the movement of the crank in loads of time and congestion of the internal combustion engine, and elaboration of theoretical and methodological framework for the use of automatic systems, as well as the definition of their principles, develops the directions of improvement of machines and mechanisms.

Statement of the problem. Modernization of the power system of hydrostatic bearings of the crankshaft of internal-combustion engine provides the installation of additional hydraulics: the Governor of the valve, check valves, safety valve, cog-wheel pump. The result of this modernization is to increase the Executive mechanisms in the engine, which leads to loss of power, the value of which is one of the main indicators of quality of the machine. 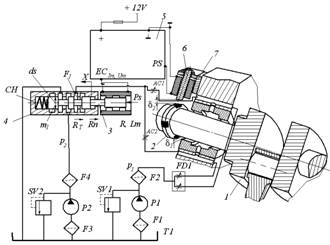 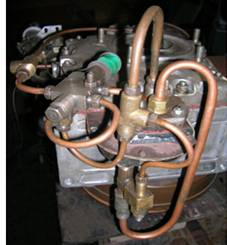 Fig. 1. a) the functional scheme of the electro-hydraulic system of automatic control: 1 — crank; 2 — a ring with a ferromagnetic inserts; 3 — plunger; 4 — body of the valve; 5 — phase-sensitive voltage amplifier; 6 — electromagnetic sensor; 7 — sensor housing; b) General view of the upgraded automated system power hydrostatic bearing crankshaft.

Horsepower to drive the oil pump is determined by the formula [5]:

- design capacity of the oil pump;

— working pressure of oil in the system;

Oil pressure in the system is within

MN/m2, and in diesel engines

МN/m2. By calculations obtained [3] that for gasoline engines pump capacity,

s-1, the oil pressure in the system

N/m2. Horsepower to drive the oil pump will be

kW, and for diesel at

N/m2, power consumed to drive the oil pump is

kW. Accordingly when two pumps are used these values are doubled.

Statement of the problem. The aim of this work is the analysis of existing systems pulsed power hydrostatic bearings and selection of the most rational schemes of modernization of hydraulic power indigenous supports the combustion engine to prevent wear and longer service life.

Presentation of the basic material. When creating systems for liquid food hydrostatic bearings with the flow distribution in several parts it is necessary to take into account the following provisions. Introduced into the practice of engineering systems of power supply with constant throttles to distribute the flow into n parts are designed, as a rule, the perception of the hydrostatic pillar of loads, which are modified in a small range, the values of which are shown in the passport data of the machine. Therefore, for the supply of hydrostatic bearings use of the system, which puts pressure value in the pockets of the stream is divided into several parts or proportional parts according to the existing load. Promising is the use in the power systems of the throttle multithreaded accomplices that are self-contained units, which allow to provide effective lubrication under various conditions of operation of the equipment. With the rigidity of the bearing in the most cases does not meet the requirements of progressive technology and the use of hydrostatic bearings with fixed inductors or one — and two-threaded regulators spending is inefficient, since in this case it is not excluded metal contact of the resistance. Supply systems, which operate on the principle of «pump-pocket», provide high rigidity and load carrying capacity of bearings, however, positive displacement pumps-manifolds flows are complex, in a constructive and technologically, and in a moment of submission of oil in the pockets of support pump unit must be installed in close proximity to the pockets to reduce system supply canals lubrication fluid.

To reduce power losses in the modernized hydrostatic support offered to the power system of hydrostatic bearings from one pump (figure 2, a, b).

For the final choice of food modernized hydrostatic bearing analyze the displacement of the shaft under load, which determines the rigidity of the technological system. 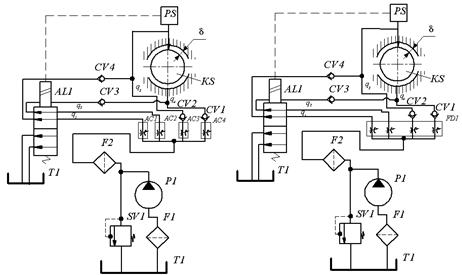 Fig. 2. The power system of hydrostatic bearings of the crankshaft from one pump: a) with adjustable choke; b) — with four current flow divider: KS — crankshaft; PS — pulse sensor.

The power supply system with throttle regulator. Throttle knob (figure 3) works on the principle of two-current flow divider. To get the number of threads more than two in the supply system is installed in parallel work of several regulators. 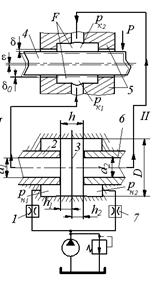 Equating consumption in one of the branches of the regulator, for example, in allocation I of the cost through a segment of the hydrostatic bearing 5, we obtain [6]:

— carrying capacity of the bearing;

— the size of the footprint of the hydrostatic support;

— the corresponding coefficient of the square and costs [6];

— relative displacement of the shaft;

— inlet pressure of the regulator and the removal of I;

— diameter of the nozzle 2;

— the gap between the end of the nozzle 2 and membrane 3 in challenge 1;

- coefficient of losses along the canal throttle input 1;

— the length and diameter of the channel input chokes 1, 6.

is very small and can be neglected. Then the equation costs (the right part of equation (1) takes the form:

— the gap between the end of the nozzle 6 and membrane 3 the challenge II;

— pressure in the outlet II;

Increase the width of the ring crack hydrostatic bearings will:

respectively the initial position of the shaft and the working gap.

Solving the resulting equation for the force

, the carrying capacity of the bearing, determine the compliance of the system:

is given in work [6] in the following numeric values:

Power supply system with multi-threaded accomplice. Consider the displacement of the shaft and the stiffness of the bearing layer of lubricant that comes in the support with more loaded and less loaded taps accomplice. Settlement scheme is depicted in figure 4. Principle of action of the regulator's partner in crime described in [6].

In the more congested the challenge accomplice working window, for example, 1 (figure 4), completely open, due to the negligible pressure loss in it. As partner works in a mode of constant costs, the coefficient

on load P is greater than zero, and

is the pressure loss on the input chokes accomplice; 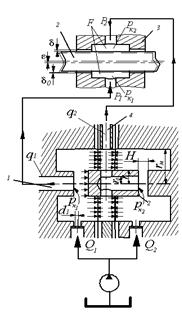 Then in a mode of constant expenses

. And without leakage flow throttle through more loaded diversion is equal to the rate of flow through the bearing:

Hence clearance in the bearing is equal to:

The growth gap will be:

The expression obtained decide regarding the carrying capacity of the bearing, then we will get:

, we obtain the malleability of the system:

Now, consider the work of the hydrostatic bearing, connected to the less loaded diversion 4 accomplice. The equilibrium condition for the regulatory authority write excluding rigidity:

— is the pressure in the team cameras accomplice 1 and 2,

are the radii of the membrane, rigid center and holes in the hard center;

— pressure in his pockets, respectively more loaded and the least loaded support section 3 (

— the pressure force between the shaft 2 and segment hydrostatic support 3:

Solve the equation (5) on

The condition of continuity of the flow

— size of the input of the throttle;

— diameter of the throttle;

— density of the fluid;

— dynamic viscosity of the liquid.

At the steady state motion of a fluid pressure

included in the cells are about equal, therefore, levels and cost of all incoming chokes and expenses in taps

Fluid flow in the less congested challenge found by the formula:

— the coefficient of discharge,

MPa (with a flow rate

m3/s). Then increase the clearance in the bearing can be found by the formula:

Deciding (5) relative to the bearing capacity of the bearing, we obtain the following expression:

On the basis of the decision of the equations (7, 8) built dependence of displacement of the shaft under load

(figure 5), which define the rigidity of the modernized system power internal-combustion engine that leads to her choice when designing.

The graph shows that the slightest shaft displacement from starting position, with increasing loads in the range up to 7 kN is a multithreaded partner membrane type in more congested rejection (curve 2). And the difference in the system compared with throttle two-threaded regulator (curve 1) with

kN reaches about 10 microns. Although in the range largest loads

kN this difference is twice as less.

Conclusions. When designing a modernized system power hydrostatic bearings of the crankshaft rationally use the system power supply with one hydraulic pump (figure 2, a, b), that allows to reduce the losses of capacity of the engine of internal combustion. Compared with the throttle system, power supply system with multi-threaded regulator-accomplice membrane type has a minimum displacement of the shaft in the support and the minimum turn of the liquid, and the partner increases the reliability of the hydraulic system and does not require additional adjustment during operation. Therefore, the scheme with multithreaded membrane regulator-accomplice recommended for use in the modernized system power hydrostatic bearings internal-combustion engine.

An application is controlled that only given resources (e.g., file, process, I/O, IPC) it can access, and

An application is controlled that only given resources (e.g., file, process, I/O, IPC) it can access, and