Ust-Vetluga (Urino, Ust-Vetluga) ground Bronze Age burial ground was excavated by the paper author during archeological surveys in the neighbor of Sutyry, a Russian non-existent village, in the fall of 2000 [1, p. 8; 2, pp. 91–92; 3, p. 188; 4, p. 230]. The necropolis is located 4 km to the East from Urino village, a regional center of Mari El Republic, 350 m northwest from the existed mouth of the Vetluga River; on the dunes of the left bank of Cheboksary reservoir (see Fig. 1). 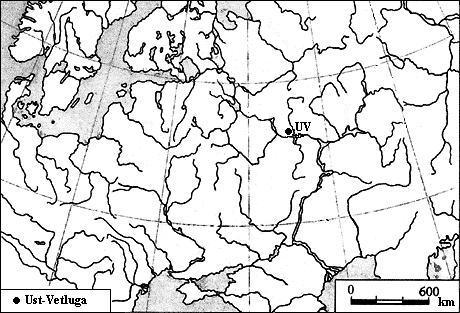 The present paper precedes the oncoming full publication of missiles collected in 2000–2008 on the site of eroded graves of Ust-Vetluga burial grounds.

Ust-Vetluga flintlock armament is presented by some types of arrowheads varying in header or petiole designs.

The 2nd type comprises arrowheads of triangular shape with concave base (2 pcs in total), that are slightly similar to flint arrows of Seyma-Turbino type Bor-Lenva burial ground [13, Fig. 3, 6, 8].

The 3rd type of flint arrowheads of Ust-Vetluga necropolis is of great interest (Fig. 2, 1). They are big arrowheads with a spread triangular tip and wide sub-triangular petiole (2 pcs). Their analogues were discovered in Reshensky graves where they were found in bulk [14, Fig. 104, 8–11]. 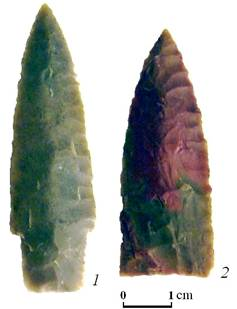 The 4th type of Ust-Vetluga flint arrows comprises heads with spread and triangular tips, short triangular petiole and stings (Fig. 3). According to O. N. Bader’s opinion these 2nd type Seyma arrows “could be called Seyma type” [11, p. 121]. Actually, the finding of 2004 is quite similar to Seyma burial ground stuff by its proportions and wide flat surface processing technique [11, Fig. 60, 1, 2]. 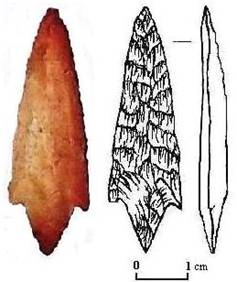 Quite big high quality flinty slices of different cuts were used as dies of Ust-Vetluga heads. Flint was probably of bouldery origin. Most of the heads were treated with precise planar retouching on both sides of an item. Some items of the flint arrows have strongly cut lengthwise edge most likely to increase breakdown power of arm.

The examined set of flint items of Ust-Vetluga graves clearly proves the hypothesis of scientists of Seyma-Turbino transcultural phenomenon about offensive nature of “social communities” (populations) of migrating soldiers of the Bronze Age who “played a great part” in creating Eurasia metallurgic province system [14, p. 271; 15, p. 75, 86].