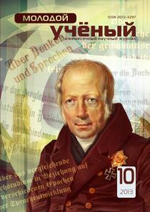 Sociological concepts of a marginality, in modern realities of society, have special values at an explanation of various social and sociocultural processes (homelessness, alcoholism, deviant behavior). Relevance of the concept marginality for understanding of the processes happening in the Russian society, is connected with its large-scale transformation, one of which aspects is fixed as marginalization under the influence of cultural universal of society. Influence of marginalization contacts that it is possible to consider as the most vulnerable the people who have lost their identity and filling up number of alcoholics, addicts, bums, etc. [3, p. 7]. In this regard, we consider it necessary, to study a marginality within concepts of R. Parka and E. Stounkvista.

The concept «marginality» is introduced into scientific use in 1928 by Robert Ezra Parkom, the representative of the Chicago school. The scientist, used it for the first time in the essay «Human Migration and Marginal Person» devoted to the study of the immigration processes.

R. Park’s concept of a marginality (from Latin margo — edge, border, a limit) meant position of the individuals who are on the border of two different, conflicting cultures, and served for studying of consequences of non-adapted migrants, features of position of mulattos and others «cultural hybrids» [4, p. 6].

According to Bankovsky S. P., in the light of R. Parka's social-and-ecological theory, society is represented as an organism and «deeply biological phenomenon», and the subject of sociology is the examples of collective behavior which are forming during its evolution. According to this theory, society, besides social (cultural) level, has so-called biotic level, underlying all social development. In the concept of «the marginal person», offered by Park, biotic level and the ecological order based on it become important theoretical preconditions. In ecological order stands macrolevel (spatial arrangement of institutions) and micro (individual's ability to move, spatial interaction, migration). Thus, the order is the basis for environmental migration as a collective behavior. According to the scientist, social changes are based on deep, biotic transformations and connected, first of all, with physical, spatial (and then and social) mobility. Social movements, changes of the socioeconomic status are the subject of the theory of a social distance; researches of cultural mobility also allowed R. Park to formulate the concept of marginal person [1, p. 256–257].

Marginal person, according to R. Parka, personifies a new type of cultural relationship developing at a new level of civilization as a result of global ethnosocial processes. Marginal man is the type of the personality which appears at that time and that place where new communities, the people, cultures start appearing from the conflict of races and cultures. The destiny dooms these people to existence in two worlds simultaneously; compels them to accept concerning both worlds a role of the cosmopolitan and stranger. Such a person inevitably becomes (in comparison with cultural environment directly surrounding it) an individual with wider horizon, more distinguished intelligence, more independent and rational views. Marginal person is always more civilized creature [2, p. 11].

In R. Park's theory the marginal person appears as the immigrant; the half-blooded, living at the same time in two worlds»; Christian new turned in Asia or Africa. The main thing that defines the nature of the marginal person is feeling of a moral dichotomy, bifurcation and conflict when old habits are rejected, and new ones have not been formed. This condition is connected with the period of moving, the transition defined as crisis. «Undoubtedly — notes Park — the transition and crisis periods in life of the majority of us are comparable with those which are endured by the immigrant when he leaves the homeland to seek his fortune in a foreign country. But in case of the marginal person the crisis period relatively continuous. As a result it tends to turn into a personality type [6, p. 355–356].

In the nature of the marginal person «the moral confusion» which is caused by cultural contacts, manifests itself in more obvious forms; studying these phenomena where there are changes and merge of cultures, we, the scientist explains, can study civilization and progress processes better.

At the same time R. Park connects the concept of the marginal person rather not with personal type, and with social process. He considers the marginal person as «by-product» of process of acculturation in situations when people of various cultures and various races meet to continue the general life, and prefers to investigate process rather not from the point of view of the personality, and society in which it is a part [6, p. 376].

Thus, R. Park thought that a marginal is a person being at the joint of two conflicting cultures. The scientist refers concept of «marginality» to microlevel, i.e. considers interaction, a spatial arrangement of individuals in society, through a prism of cultural universals.

It can be assumed that social changes in society are responsible for the formation of marginal groups, and as a consequence and marginalized individuals.

With the movements between different sectors of society, they fall into the layers of cultural conflict.

Not adapting to any of the proposed and formed cultural norms, they become outcasts who do not belong to any sector of society.

At the same time, the cultural mobility allows marginalized absorb cultural attributes of layers between which they are located, allowing them to be an individual of the «new model» that generates a new type of cultural relations.

The situation between the «two worlds» at the same time maks the individual (marginal) more flexible to the changing conditions of society.

R. Park's ideas, continued and developed by E. Stounkvist who, created the concept of «the marginal personality» on the basis of R. Park culturological approach (the monographic research «Marginal Person» of 1937).

E. Stounkvist describes marginal situation of the social subject participating in the cultural conflict and being «between the devil and the deep sea». Such individual is on the edge of each of cultures, but doesn't belong to any of them. Typical features of the similar personality and the problems connected with its non — adaptability and adaptability and also sociological value of the marginal person become the object of attention Stounkvista. He considers the marginal person as the key personality in contacts of cultures. The marginal environment is the area where two cultures intertwine and where the culture mastering space combines and unites features of both cultures. And in the center of this interlacing there is marginal person fighting to be the leading personality «between the devil and the deep sea».

The Stounkvist defines the marginal person in terms of the personality or group which move from one culture to another, or in certain cases (for example, as a result of a marriage or through education) combine the two cultures [4, p. 9]. The individual is between two social worlds one of which, as a rule, is dominant over other. E. Stounkvist, concentrating on the description of an inner world of the marginal person, applies the following psychological characteristics reflecting degree of sharpness of the cultural conflict:

-          destruction of «the vital organization», mental disorganization, senselessness of existence;

E. Stounkvist was interested in the reasons culturally-determined marginality because in each of us there are a lot of social counterparts, giving rise to marginal association. The scientist identified three phases of evolution of the «marginal man»:

1)        the individual doesn't realize that his own life is captured by the cultural conflict, it only «absorbs» dominating culture;

2)        the conflict is experienced consciously and it is at this stage an individual becomes a «marginal»;

Thus, it should be noted that R. Park considered the marginal personality, as a human being in in constant tension because of the cultural conflict of «two worlds». The escape of this state, according to the scientist is not possible. E. Stounkvist, on the contrary, considered that even if there is disagreement between the culture of the society, the marginal becomes a person with a new style of life, adapt to various conditions of societies. A place where two cultures come together and combine E. Stounkvist called marginal environment in which marginal mastering the basic position of the two cultures in an attempt to become the leading personality.

Within the marginality concept of E. Stounkvist in marginal appears dominant culture, as well as the possibility of cultural and social mobility (for example, marriage or education).

When you select the three stages of evolution of the «marginal man» E. Stounkvist comes to the conclusion that as a result, marginal or overcomes cultural conflict and the person becomes more adapted to two cultures and social change in culture.

However, there is a negative option that the marginal does not overcome the cultural conflict, and becomes an outcast in every sense of E. Stounkvist interpretation. The period of transformation of the marginal personality takes about 20 years, according to E. Stounkvist.