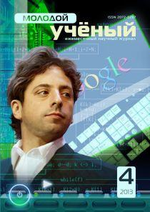 Today swarm intelligence is a branch of artificial intelligence that studies the collective behavior and emergent properties of complex, self-organized, decentralized systems with social structure. Such systems consist of simple interacting agents organized in small societies (swarms). Although each agent has a very limited action space and there is no central control, the aggregated behavior of the whole swarm exhibits traits of intelligence, i.e., an ability to react to environmental changes and decision-making capacities.

Machine learning is the field of artificial intelligence that deals with algorithms that render computational models capable of learning and adapting to their environment. From an abstract viewpoint, machine learning is the procedure of extracting information in the form of patterns or rules from data. This purpose requires the use of computational methods. Human interaction can also be beneficial within a collaborative framework to the algorithms. However, the elimination of this necessity still remains the main challenge in the development of intelligent systems.

This material is dedicated to the conjunction of swarm intelligence and machine learning. In the following work is introduced a hybrid method for overcoming the problem of neural network training which consists in effective determining of the synaptic weights of a neural network to get the desired output for a set of input vectors.

For investigation was chosen radial basis function network for its self-adapting and self-learning features. On the other hand it has several limitations with regard to convergence speed and forecasting accuracy. To overcome this problem artificial fish swarming algorithm inspired by the natural social behavior of fish in searching, swarming and following is used for optimization of radial basis function network. 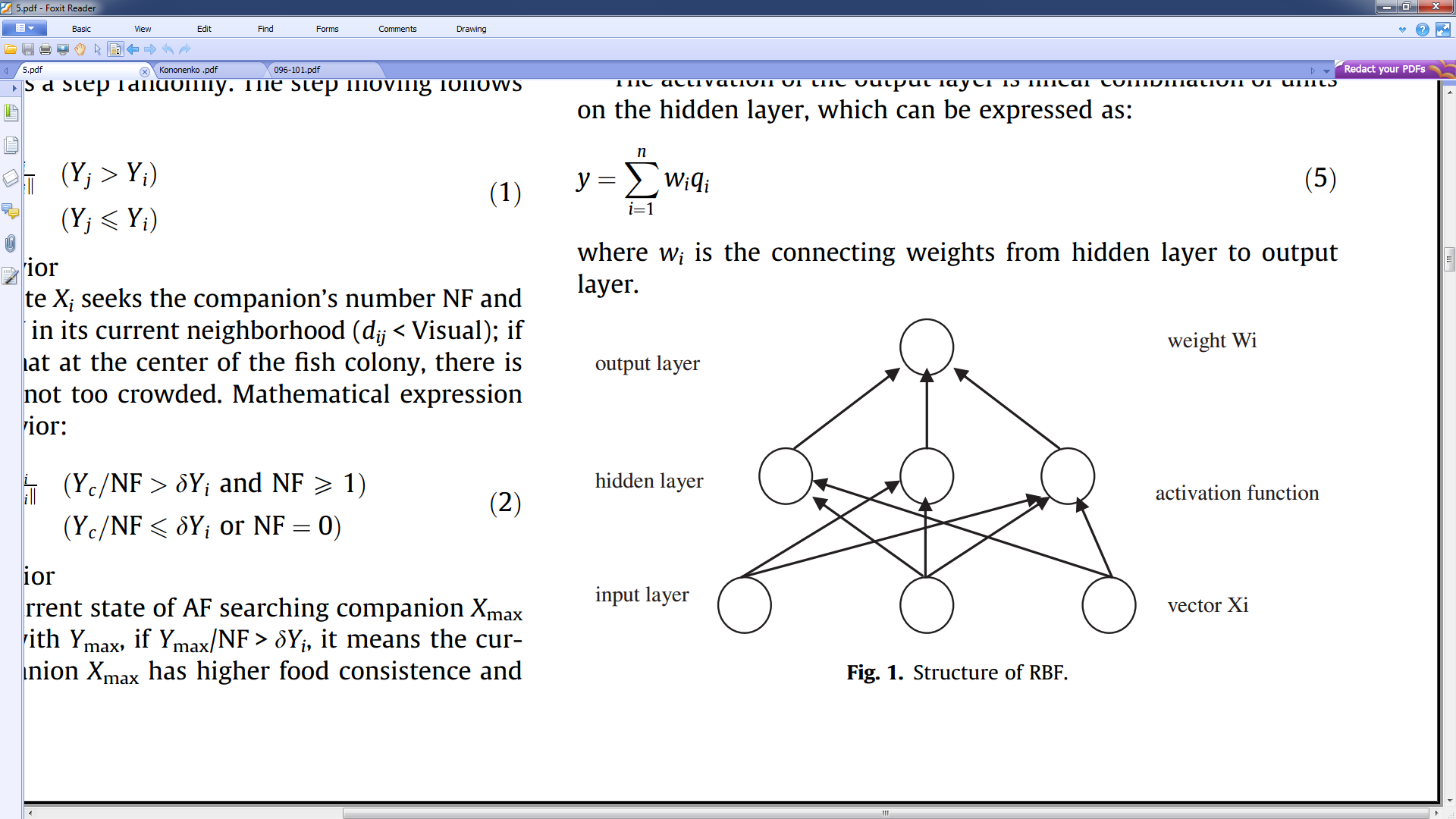 An introduction step to clustering procedure is to train the model using original data. In order to determine an activation function center

of each neuron in the hidden layer, width

from hidden layer to output layer the learning algorithms are used.

The learning algorithm can be divided into two parts. The ﬁrst part is clustering of all input samples and working out activation function center

of units in hidden layer, and the width

. The second part is to train the linking weights from hidden layer to output layer after the

Good robustness, global search ability, tolerance of parameter setting, and insensitiveness to initial values of AFSA(Artificial Fish Swarm Algorithm) can be used to upgrade the learning algorithms in determining parameters for neural network.

Assume the number of training samples is

as a randomly generated training samples as center

, the number of hidden units. Then, according to the principle that training samples should be closest in distance to the center we adjust the center, and execute iteration until we find the right primary function

. The next step is to work out the width

Define the number of hidden units

as the population of artificial fish colony; Training samples count

is the maximum iterative times; Visual area of artificial fish is 1, moving step is

The number in brackets points to iterative number, i.e.

— value of center at 0 iteration.

Define the initial vector of weights

is the random number between -1 and 1. Assume, the number of units in hidden layer is

is the M-dimensional vector, the number 0 in the bracket means the first time of calculation. The acceptable network output error is

The adjustment of center with a help of swarming behavior of artificial fish:

The local optimum of training sample

during the process of iteration is:

In the equation above,

The formula for adjusting the center:

Approaching the iteration n, we use sample

as closest to current center to replace

Denoting the weight with swarming behavior:

. Thus, we assume the distribution of the center is approximately fixed and then update the optimum result in the report. Searching behavior in determining the weight value represents the comparing of the current food concentration with the one from report and update it in case the result is better. In order to make a decision whether to continue the iteration or stop it we apply to preset condition that food concentration is bigger than

or the maximum iterative number is achieved. If conditions are satisfied results are sent to output. Otherwise, iterate again.

, which is the center of primary radial basis function. The last step is to calculate the variance

which is done with a help of Gauss function:

is the minimum distance between the chosen centers.

This hybrid K-means clustering procedure discussed above can be demonstrated with the following graph: 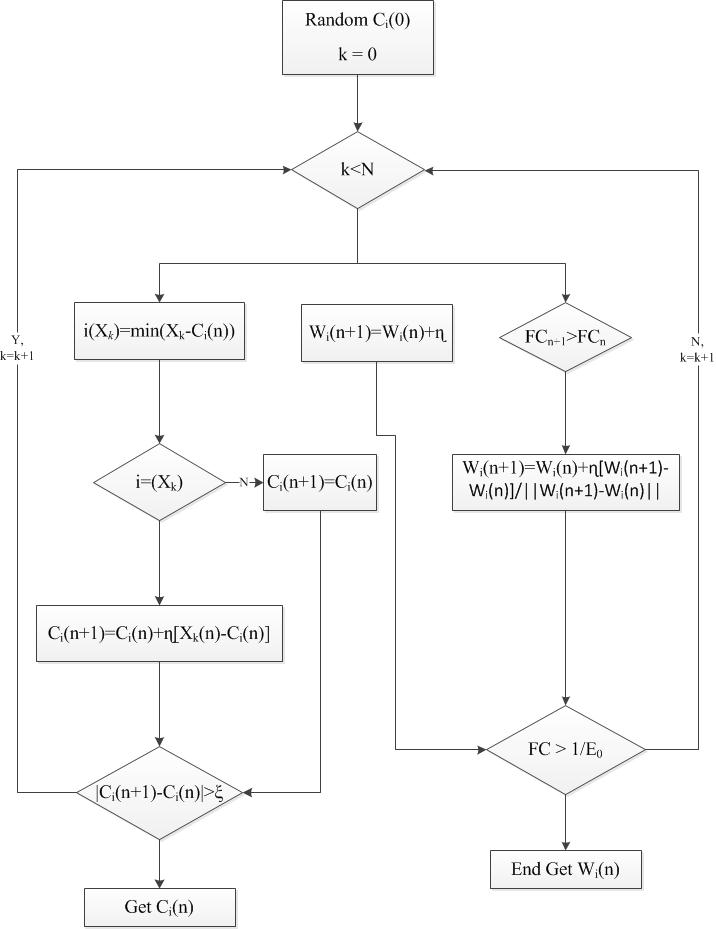 Algorithm of Calculation of Factors in Piecewise-Quadratic...

Algorithm of Calculation of Factors in Piecewise-Quadratic...