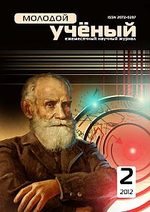 At the beginning of 20th century T.Morgan used appendages of advanced teleosteans as a model to analyse the trends of reparative regeneration in fish [1,2]. The main feature of a standard teleostean fin is the prominence of the distal compartment (free fin) that is supported by a number of bony rays, or lepidotrichia. In both paired and non-paired fins, the regeneration of the lost fragments complies with the principle of epimorphosis. Epimorphic regeneration includes two requirements – the formation of a regenerative blastema, an undifferentiated anlagen of the lost appendage part, and a mechanism activating the morphogenesis itself [3,4]. In Urodela (salamanders and newts), the reparative regeneration of the tail and the limbs shares the same principle and provides restoration of all missing structures and tissues types [4]. As widely suggested, in teleost fishes appendages can be successfully restored only if the proximal ends of the bony rays are retained after amputation, that is, the regenerative capacity of fins is mainly restricted to the distal fin region, containing bony fin rays [3,5,6]. A recent study on zebrafish, using transgenic tools, demonstrated that mature osteoblasts (cells secreting the matrix of bony rays and comprising its cellular compartment) of the zebrafish’s caudal fin are thought to be a key source of bony rays’ replacement [7]. Upon amputation osteoblasts undergo dedifferentiation, contribute to blastema formation and eventually re-differentiate to form osteoblasts of the regenerating area. However another osteoblast cell source in regeneration cannot be definitely excluded.

While regeneration of the fin’s bony rays have been widely explored in teleost species [1-10,15,18], the ability of Actinopterygii (ray-finned fish) to regenerate fins entirely, including the endoskeleton compartment (the skeleton anchoring fins to the fish body) of fins remains to be studied in different species. The endoskeleton of fins is derived from the cartilaginous anlagen, and, consequently, can be homologated with the endochondral skeleton of tetrapod appendages. In the paired fins of ray-finned fishes the supporting fin base endoskeleton attaches the fin to the girdle. In theory, actinopterygians may support regeneration of endochondral skeleton of the paired fin, because we have collected data indicating probability some teleosts, such as Glass knifefish [11], readily regenerate their caudal axial endoskeleton. However, no actinopterygian model – capable of effective regeneration of paired fins amputated through the basal level with endochondral support has been described so far.

With reference to the regenerative potencies of the endoskeletal elements of actinopterygian fins, the aim of present study was to investigate the regeneration of paired pectoral fins in lower ray-finned fish from the family Polypteridае (Fig.1). According to recent

Fig.1. Two representatives of the ancient family Polypteridae: (A) Senegal bichir (Polypterus senegalus) and (B) Calamoichthys calabaricus. Pectoral fins with the lobe base are distinguishable anatomical feature of the polypterid fishes.

molecular studies, the species of this group are the most phylogenetically basal representatives of living Actinopterygii still retaining a number of ancestral anatomical traits [12,13]. The structure of the pectoral fin of Polypteridае is unique for ray-finned fishes, as it contains both a well developed fleshy base and a distal component. Externally, these fins resemble appendages of some Sarcopterygii, for instance, the fleshy fins of ancient Coelacants, like Latimeria. The fleshy base of polypterid pectoral fins is supported by a complex-arranged endoskeleton with three large basal elements, and numerous radial elements (Fig.2.) [14].The narrow base of the fin that supports distinct fleshy lobe enables total amputation of the fin without significant injury of the fish. For study of pectoral fin regeneration in polypterids we have chosen commercially available Senegal bichir (Polypterus senegalus) that can tolerate being in captivity.

Juveniles of the Senegal bichir (Polypterus senegalus) after metamorphosis, ranging in size from 7 to 9 cm long were commercially obtained. During the experiment, the animals were maintained in aerated fresh water (pH=6.7 – 6.8, dH=10) at a temperature of 26 – 28°C. Animals were acclimatised to these conditions for 2 – 3 weeks prior to the experiments. Before amputation bichirs were anesthetised in an aqueous solution of tricaine methane sulfonate (at a dilution 1:4000, MS222, Sigma). The pectoral fins were amputated through the proximal cartilaginous ends of the marginal basales of the fin endoskeleton, that is, the pectoral fins were almost entirely removed. As the external morphological events taking place during fin regeneration in polypterids have not been described before, a series of images, which reflected consecutive changes of regenerate development, was collected. All amputated normal or regenerated pectoral fins were fixed for subsequent skeletal staining in 96% ethanol overnight and stored for up to several days at room temperature. The Alcian blue/Alizarin red staining procedures for pectoral fins were based on standard technique for cartilage and bone visualization.

Previous observation on the bichir pectoral fins indicates significant similarity in the skeletal morphology between juveniles and adult fish. Fig. 2 shows the complete differentiation of the endoskeletal elements in the juvenile fin, including small round cartilages between the distal ends of prolonged radials. 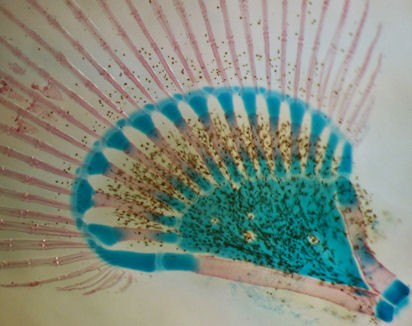 Our study provides evidences that juvenile bichirs are capable of completely restoring pectoral fins after amputation. Regeneration starts with epithelization of the wound area – transparent wound epithelium covers the exposed tissues of the fin base within 2-3 hours after amputation (data not shown). A few days after epithelization a conical regenerate (blastema) forms at the site of the amputated fin (Fig.3B). Subsequently the regenerate grows and undergoes changes of shape including the flattening of its distal margin (Fig.3C, D). Later this flattening develops into distal fin parts, containing bony rays, while the base of the regenerate forms a fleshy lobe. Within the second week of fin regeneration the distal parts of the regenerate increase in size appreciably, and gradually regenerate acquires fin outlines (Fig. 3D). During this period redevelopment of the fin endoskeleton commences: the precartilaginous disc of the endoskeleton forms at the basal part, later, the disc separates into prospective individual skeletal elements (Fig. 3G). The bony rays arise later; simultaneously with their development a pronounced border is established between the two parts of the regenerating fin. At the fourth week of regeneration a regenerating fin contains both endoskeleton and bony rays (Fig.3H) that are arranged in similar a way to the normal pectoral fin. During further regenerative development individual elements of the endoskeleton finally separate from each other and begin to ossify (Fig. 3I). 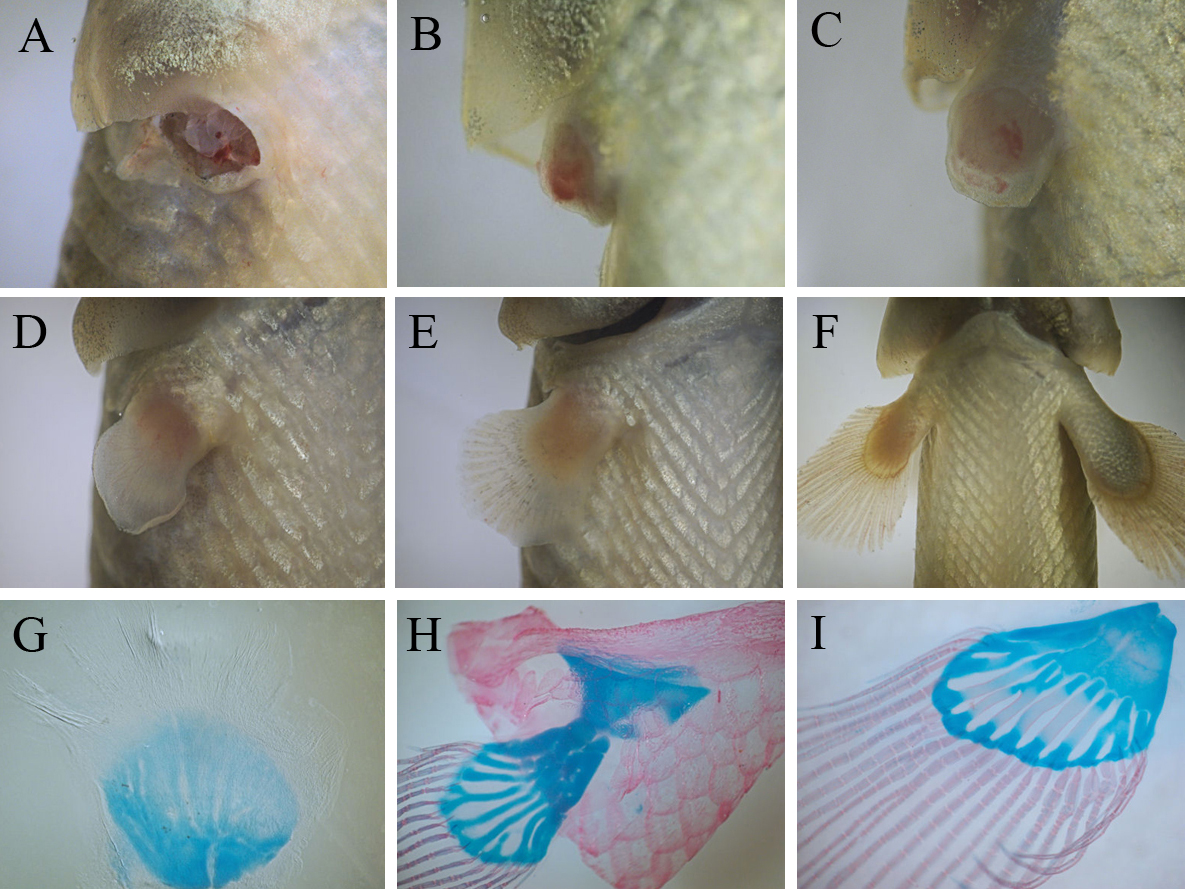 Fig.3. Events of bichir pectoral fin regeneration from wound to completely regenerated fin: (A) amputation, (B) blastema formation, (С – E) series of differentiation of fin parts (flashy base and distal lobe) and , (F) regenerating fin grows; three stage of the regenerative development of the fin skeleton (G – I): beginning of the separation of individual elements within precartilaginous disc (G), formation of fin bony rays and the cartilaginous endoskeleton (H), ossification of the endoskeleton (I).

Thus, on the basis of events dominating the regenerative process, the process can be divided into consecutive phases: a phase of wound healing, ending with epithelization of the wound surface, a phase blastema formation, a phase of lobe differentiation and a growth phase (from a stage involving the establishment of discernible border between the fleshy base and the distal lobe of regenerating fin). On average, the regenerative redevelopment takes two months, largely accounted for the final growth of the regenerate. At the end of this growth, the regenerate achieves a size comparable with normal fins. A comparison of regenerates with normal pectoral fins indicates that fin regeneration does not lead to significant anatomical malformation; even the fin endoskeleton maintains its structural complexity (it contains both basals and radials), although we note that some regenerates tend to restore an incomplete set of endoskeletal elements (Fig.3I).

Starting from the reports of Broussonet (1786), the regeneration of the fin in ray-finned fishes has been studied in typical Teleostei [15]. These model fish readily restore the distal parts of their fins that are supported by bony rays (exoskeletal elements of dermal origin), while the regeneration of proximal structures is less efficient. Our data demonstrates that, at least in young bichirs, regenerative abilities are not restricted to distal parts of fins–bony rays – but also includes elements of endochondral skeleton and skeletal muscles of the fin base. This remarkable feature suggests a relationship between bichirs with urodeles, which can perfectly replace missing musculoskeletal structure of limbs at proximal and distal sites [16]. Therefore, this study on paired fin regeneration in Polypteridae may help to establish significant insights into the regenerative limits of the ray-finned fish.

The bichir’s regenerative ability has important consequence for studying mechanisms controlling epimorphic regeneration of the appendages of lower vertebrates. The pectoral fin of ray-finned fish is homologous to the forelimb of tetrapods, however, bony rays are not developmentally and structurally homologous to the limb skeleton. The unique ability of bichirs to restore the whole fin, including the endoskeleton, via epimorphic regeneration provides an opportunity to compare regeneration events and mechanisms of homologous compartment in two phylogenetically distant taxa of lower vertebrates – Actinopterygii and Urodela. Fin regeneration in bichir follows the same external pathway as limb regeneration in newts: from wound healing via blastema formation to differentiation and growth of the regenerate [17]. The later stages of limb regeneration (morphogenesis events) in newts mirrors the limb development [16,17], and the regenerative development of endochondral compartment of bichir pectoral fins seems followed its normal pattering (briefly showed by D. Jandzic and R. Cerny (D. Jandzic and R. Cerny, presented at the third meeting of the European Society for Evolutionary Developmental Biology (EED), Paris, 6-9 July 2010 ), as the individual cartilages of regenerate gradually arise within the precartilaginous disc that is formed before beginning of bony ray appearance.

Complete pectoral fin regeneration requires the re-formation of all lost tissues arising from the cell populations of the blastema. The most intriguing aspect of fin regeneration in bichirs is the origin of the blastema cell population, and especially the manner by which its lineage giving rise to the new osteoblasts. In teleosts replacement of the bony rays has been demonstrated to be strongly reliant on the presence of osteblasts in the fin stump. As shown by the recent study of zebrafish regenerating caudal fin, mature osteoblasts may undergo dedifferentiation, proliferation, migration to the blastema and eventually become involved in the redevelopment of the regenerate bony rays [7]. These findings cohere with the experimental facts indicating that the complete removal of a fin’s bony rays before amputation prevents its development in the regenerate [18]. Thus, mature fin osteoblasts of the teleost fins are seen as a key factor in the bony rays’ replacement as they are a known source of the cells for blastema formation. Since no fin rays’ osteoblasts remain after entire pectoral fin amputation in bichirs, there must be an alternative source of osteoblast lineage in the regenerate. This assumption is confirmed with the recent data, which demonstrates that regeneration of the bony rays of caudal fins amputated throughout fin endoskeletal support is possible in some carps and, surprisingly, in zebrafish [19]. This interesting issue of bichir pectoral fin regeneration awaits more sophisticated exploration.