The concept of the lexico-semantic field in linguistics 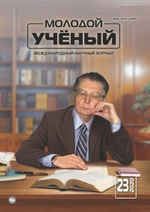 This article is sanctified to give a conception to the lexico-semantic field with the exact concept which illustrates different forms of the concept “Age. It also includes stages of age in terms of semantics.

The problem of lexical-semantic field is put theoretical researches of fundamental linguistic concepts. This problem it is in the river-bed of major researches, because lexico-semantic the field is totality of lexemes designating the defined notion in wide sense of this word — on modern presentations of philologistsplugs in the composition of word of different parts of speech; with assumption.

Including phraseological units and lexical materials of different forms of existence national language, not only literary but also common speech, dialects, jargons, with an address to historical lexical materials at orientations on diachronic research.

Lexico-semantic field characterized by the row of signs of the system as in a synchronous plan(semantic correlativeness of lexemes, «dividing» the field between itself, presence of hyponyms and heteronyms), so in a genetic-diachronic plan. [1]

Aim of this article — to analyse and creatively generalize existent points of view on the lexico-semantic field. The lexical level of language is organized by difficult correlations lexico-emantic fields of both contiguous and intersecting.

Compare the fields «knowledge», «study», «benefit», «inlightening», «mind», «progress», «elimination», «creation». Lexico-semantic field — a concept is very capacious. In him the main problems of lexicology cross are problems of synonyms, antonymies, polysemies, problem of correlation of word and concept.

Decision tasks related to the semantic fields in a vocabulary, allows newly to light up enumerated. [2]

The concept of the semantic field got large distribution, number concrete researches grows constantly, in a theory the fields are brought in additions and clarifications. The field theory all anymore contacts with certain by the classification system of dictionary composition that is dismembered on well-organized on attitude toward each other large and small groups.The concept of the semantic field (S. F) behaves to the basic concepts modern lexical semantics.

With the meaning of age in the Russian language form a lexical-semantic field age, which can be considered in various aspects, e.g., formal, functional, semantic. Word meaning age undergoing constant development and changes in language.The result of semantic development of words with the designation of ages is the existence in the language of their direct, portable and symbolic values, which are widely used by philosophers, writers and poets in various types of artistic creativity. An important role plays selection of words with the designation of age and use, as the functioning of words denoting age, in the work reflects the uniqueness of the style of the author, his creative individuality and uniqueness of vision of the world, therefore the study of age-related vision of the world of writers is of great interest. Semantic field is the most voluminous onomasiological and semantic grouping of words. A semantic field represents the hierarchical organization of words, which are United by one generic value and is in the language a certain semantic field. Onomasiologische property of the semantic field is that at its core is a generic seme, or hypersemia, which denotes a class of objects.

Semasiologically the characteristic of the field is that the members of the field relate to each other by integral-differential characteristics in their values that allows them, according to E. I. Dibrova, to unite and to distinguish between within the same fields. [4, 11]

The actual semantic structure of the field includes the following parts:

1) core field represented by the family of SEMA, or hypersemia.

Hypersemia field is the semantic component of a higher order, which organizes itself around the deployment of semantic fields;

2) the midfield is composed of units with integrated common core and adjacent units value;

3) periphery includes units, the most remote of its value from the kernel, a common generic concept here pushed into the category of potential or probabilistic semantics. The peripheral units can have a contextual value if the field is built on a particular text of a work. Usually the peripheral field units come in contact with other semantic fields, forming a lexical-semantic continuity of the language system. Most fully the properties of lexical-semantic fields are considered I. I. Chumak:

Lexico-semantic field of age — a group of words denoting age.An integral attribute inherent in each member of this system is the value of age. The archilexeme of LSP age is seme age — the general seminal generic meaning of LSP, it is a unifying element included in the semantic set of each of the field members. The main properties of LSP age are:

− the set of values ​​having a common component age forms the LSP:

− microfields — semantic associations connected by an integral attribute — the value of any particular return, usually expressed by the dominant of the field — are distinguished in the LSP;

− interdependence and possible interchangeability of elements; each word of the language is included in a specific LSP, and, as noted above, not in one.

Thus, the LSP of age is a collection of lexemes related by the relation of submission to the generalizing concept expressed by archilexema age. Through continuous sampling, we identified the composition and structure of the age field in Russian, it includes ____ age designations and consists of ____ microfields.

The dominant features of microfields are designations of age: childhood, adolescence, youth, youth, maturity, old age, since they have the main feature of dominant lexemes — the inability to determine their lexical meaning through other designations of age. The vocabulary definition of these designations of age corresponds to the following scheme: «age to»... + «period of life at this age»: Infancy is an early childhood.

Childhood — early, to adolescence, age; period of life at that age. Happy childhood. Childhood friend. Fall into childhood (from old age lose your mind). The childhood of mankind (trans.).

Adolescence — the age between childhood and adolescence; period of life at that age.

Second youth (a surge of new strength in old age). 2. About the young generation, about youth (high). This forum brought together all the youth of the world. Maturity — 1. See mature. Inherent to a person who has reached full development. Mature age (replacing youth). 2. Age between youth and old age; period of life at that age. Thus, undertaken a study allows to do the following conclusions. Lexico-semantic field as special unit possesses a difficult and very original structure, component elements that bound by inter se by paradigm relations. The analysable lexical field of locality is multidimensional, volume. In basis well-organized classes lie organization of the lexico-semantic field, lexical paradigms of different type, structure-forming the semantic field on vertical lines and on a horizontal. Kernel of the lexical field as his semantic a dominant is formed by lexical unit expressing common invariant value. One of basic properties of structure of the lexico-semantic field there is her integrity that is provided by relations, supposing including of less difficult units in more.