The effect of compulsory extracurricular lessons on students’ academic achievements

Nowadays many schools introduce extracurricular lessons for their school programs, but nobody knows how increasing of instructional time may affect on students’ achievements.

The main aim for the selection of the theme was to identify how compulsory extra lessons affect on students’ achievements.

At the moment this topic is relevant, but few people thought about the consequences of increasing extracurricular time. As we know the theory that increasing the number of hours in the school contributes to the improvement of students' achievements, but on the other hand, we can also find its shortcomings. For example, the influence the instructional time on emotional and behavioral state, this is also the reason for improving or worsening our achievements.

In research articles and scientific works of people, who searched about these phenomena were used.

The idea that extra-curricular lessons improve students’ learning is growing in popularity. The Relationship between academic achievement and instructional time seems impossible for us, but the increasing of instructional time is the main decision for some school administration and educational officials, also for parents. According to statistics the number of instructional time in school in Kazakhstan in 2016–2017 was 7373 [1], for which the norm of the maximum training load according to the Typical curricula is from 24 hours to 39 hours per week in 1- 11 classes [2]. If we look at other states, we will get that according to data of the Organization of Economic Co-operation and Development [3] the instructional time was ranging from 741 h/year in Sweden to 1249 h/year in Austria, it means that the length of extra lessons become more and more popular.

While searching this issue, many theories were found. One of them is the theory of Bandura (1992). She analyzed how individual’s feeling may affect on our achievements. If teachers are confident in their abilities, then this will have a good effect on us [4]. This study says that the teacher’s mood, or the ability to present a topic, affects our understanding, as well as our achievements.

According to theory of Carroll (1963), the student can effectively study the tasks in which he spends his time, the time he considers necessary for him [5]. Their method became the basis for other theories, for example, Bruner (1966) and Bloom (1976). These theories support the idea of the importance of individual differences among students. This is necessary information, because it proves that the lengths of extra lessons are not always beneficial for students, since everyone has a certain time to study topic or to do homework [6].

If we take the scientific work of the researchers, then they made such conclusions:

Dotterer (2007) examined the relationship between school activities and scholastic results in their cross-sectional examination. He found that time went through in extracurricular activities and homework were emphatically related to school holding and school self-esteem, whereas watching TV negatively related to students achievement. [7]

A study by Randall and Bohnert (2009) showed the relationship between participation in compulsory classes and difference depressive moods in the intensity of participation. Adolescents who spend more than 20 hours on extra-curricular activities were the highest estimates of depression, while children who spent more than 10 hours attending classes on the lowest rates of depression. [9]

In order to expand on the topic, It was decided to conduct a survey. The studies were held in the Nazarbayev Intellectual School of Chemistry and Biology in Karaganda among 7th, 9th and 11th grade in 2018. There were planned to interview 140 students of these grades, however the survey was taken by only 57 people from different classes.

The presented picture compares how much time students of Nazarbayev Intellectual School spend in this school. Generally, there is a significant difference between answers “2”, which means “8–9 hours”, and with others. People, who choose “2”are twice as great as pupils, who answered “3” (more than 9 hours), also it approximately six times as high as students answering “1” (less than 8 hours). Overall, majority of pupils are in school more than 8, but less than 9 hours. 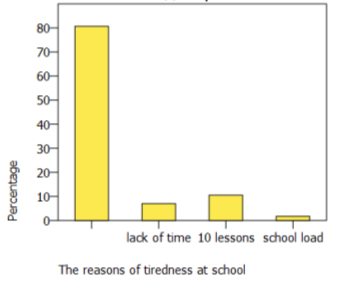 The figure below represents the reasons of tiredness at school. According to this diagram, 8- per cent of competitors did not deign to answer. If we do not take this result, the length of school time stand first in the ranking. This means that 10 per cent of pupils get stressed because of 10 lessons. This is followed by another problem, which is caused tiredness and bad mood. 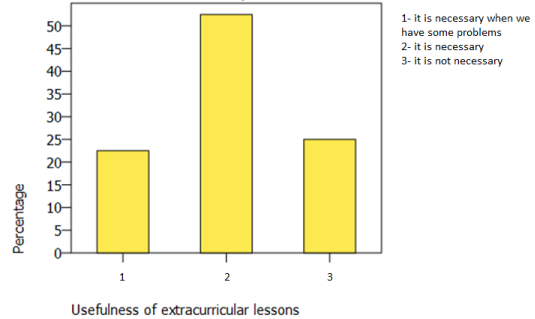 Correlation test and bar charts for different combination of variables

Correlation test is a bivariate examination that measures the quality of variability between two factors. The figure below demonstrates the relationship between two factors. The correlation in this table italicized. According to them, there had been a correlation between grade and with question “Have they ever been in situation which caused stress at school?”, between grade and reasons of stress, also the remaining is variability between feeling after all school activities and with opinions about the statement: “Extracurricular lessons have positive influence on students’ academic achievement”. If the value of correlation coefficient goes toward 0, this is means that the relationship between two variables is weaker. 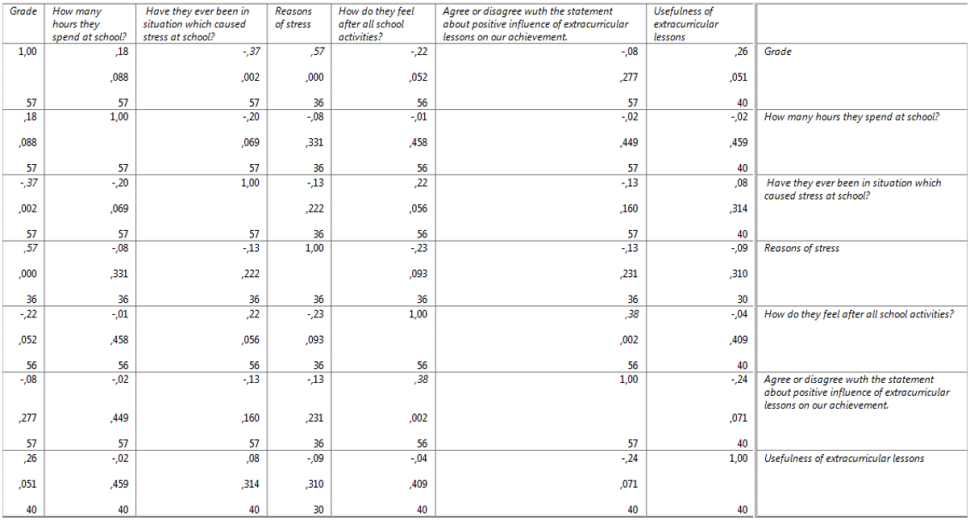 The remaining table presents the relationship between feelings after school activities and with opinions about the statement: “Extracurricular lessons have positive influence on students’ academic achievement. Students feeling exhausted mostly disagree with the statement estimating over 10 per cent. This answer shows downward trend in other emotions. Tired pupils records highest level of agreeing that the length of school time has positive effect on us. Despite the declining percentage of answering “agree”, it stands first in three categories. Overall, the biggest percentage represent that extracurricular lessons do not negatively effect on pupils’ achievements, whereas answer “disagree” mainly for those who are exhausted after school lessons. 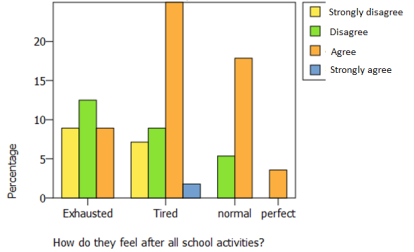 This research investigates how extracurricular lessons affect the students’ achievement. The results represent that pupils have tiredness because of the length of school time, while the most of them believe that extracurricular lessons are necessary. Basically, by analyzing, you can see that the variables depended on the value of the grade. It shows that with growth of grade, than higher possibility to suffer from stress. Moreover, there have been a noticeable difference and similarities between the results, which I collected from three grades.

In addition, the time spent for study or for classes can affect the general condition of pupils, which can cause a stress or depression. It should be noted that pupils spend time more effectively if they want to do certain work.

– With soaring grade, the possibility to have stress is higher.

– Assessments have more influence on student’s condition, but only in 11th grade deadline affects mostly than others.

– The biggest percentage represent that extracurricular lessons do not negatively effect on pupils’ achievements, whereas answer “disagree” mainly for those who are exhausted after school lessons.

The Organisation for Economic Co-operation and Development (OECD): Enquiries Into

Russia has been a member of Common Economic Space together with Belarus and Kazakhstan (since...

For example, the economic dominance of OECD (Organization for Economic Co-operation and Development) countries – which has helped circulate English in the new market economies of the...

The Organisation for Economic Co-operation and Development (OECD): Enquiries Into

Russia has been a member of Common Economic Space together with Belarus and Kazakhstan (since...

For example, the economic dominance of OECD (Organization for Economic Co-operation and Development) countries – which has helped circulate English in the new market economies of the...