Methods of studying the efficiency of oil development at Acar field

In this work, the geological structure of the Asar site, methods and techniques for calculating oil and gas reserves are examined, and promising areas for the efficient production of hydrocarbon raw materials are identified.

The Asar oil and gas field is located in the steppe part of the Mangyshlak peninsula, 25 km northwest of the Zhetybai field. Administratively, it refers to the Karakiy district of the Mangistau region of the Republic of Kazakhstan.

The structure was identified by seismic surveys in 1965, exploratory drilling began in 1968. The field was discovered in August 1968 by well 2, which provided an industrial flow of oil from the roof of the Ju-X horizon with a flow rate of up to 63 m3/day. Further, the oil and gas occurrence was established in sediments from the Bathonian to the Aalen strata with a stage of oil and gas content in the productive stratum of about 600 m.

In the Asar field, a penetrated section is composed of Mesozoic and Cenozoic deposits. The maximum penetrated thickness is 2740 m in well 27.

According to heterogeneity indices, lithological variation of reservoirs is studied and they provide an opportunity to get the most complete picture of the nature of the reservoir structure.

In the Asar field, within the productive horizons, from 1 to 10 reservoir layers have been developed; over many horizons, the layers in individual sections of the deposits merge into a single layer. Layers collectors in most reservoirs are characterized by high heterogeneity, and are often replaced by clays in fairly large areas. As a result of such replacement, many deposits have significant zones of lack of reservoirs.

The generalization of reservoir fluid research results was carried out when compiling the oil and gas reserves and the Technological scheme of development [2].

The bulk of the research of reservoir oils was carried out at the stage of exploration and trial development of the field. Currently, the study of the properties of reservoir oil and gas composition is ongoing and deep oil samples are being taken from new drilled wells. If it was not possible to take in-depth samples, wellhead oil and gas samples were taken to recombine the reservoir mixture.

In the process of studying oil samples, the following experiments were performed:

Geological oil reserves were calculated by the volumetric method.

The volumetric method for calculating oil reserves is based on data on the geological and physical characteristics of the counting objects and the conditions for the occurrence of oil in them [3].

The parameters of the volumetric method are determined on the basis of a thorough study of a set of data on appraisal, exploration and development wells, including materials from field geophysical methods, laboratory tests of cores, oils and waters and results of field studies in the process of testing and testing productive horizons.

The degree of exploration of deposits in the field allows us to estimate reserves in three categories B, C1 and C2.

During the analyzed period, forty-two new wells were drilled, according to the results of which structural maps and thickness maps were clarified.

To determine the effectiveness of the development system being implemented and the quantities involved in the development of oil reserves in the field as a whole and in operating facilities, the displacement characteristics were constructed and analyzed by various empirical methods, the analysis of the results of which showed good convergence. As a result, the methods of V. D. Lysenko and S. N. Nazarova, G. S. Kambarova and A. V. Kopytova, A. Pirverdyana, based on field data, taking into account the pattern of changes in current and accumulated oil production or flooding of deposits during their operation. These methods made it possible to determine the magnitude of the oil reserves involved under existing operating conditions of the wells by extrapolation to the maximum profitable production rate and water cut of the product. The values of the reserves involved, determined by the 5 selected methods, are presented in table 1 (data as of 01.01.2015). The oil reserves involved in the active development, calculated by the above methods, for the whole field are shown in Figures 1–5.

The production of recoverable oil reserves for conditions

Fig. 1. Characterization of oil displacement by water according to the method of A. V. Kopytova

Fig. 2. Characterization of oil displacement by water according to G. S. Kambarova

Fig. 3. Characterization of oil displacement by water according to the method of S. N. Nazarova

Fig. 4. Characterization of oil displacement by water according to the method of A. Pirverdyan 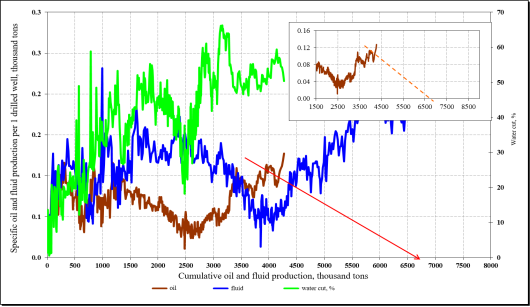 Fig. 5. Characterization of oil displacement by water according to the method of V. D. Lysenko

Based on the studies, it can be concluded that this field is oil productive with an oil recovery ratio of 35.67 % of the approved balance sheet reserves.

A majority of recent bank liquidity crises in developed economies were caused by increased uncertainty over a bank’s solvency and played out primarily in wholesale funding markets. [1, p.16] The new Basel III accord aims to address liquidity risk in banks through the Liquidity Coverage Ratio (a liquidity...

A majority of recent bank liquidity crises in developed economies were caused by increased uncertainty over a bank’s solvency and played out primarily in wholesale funding markets. [1, p.16] The new Basel III accord aims to address liquidity risk in banks through the Liquidity Coverage Ratio (a liquidity...