It has been studied that the epoxidation of metylcyclopenthene with the participation of hydrogen peroxide. It was shown that polyoxotungstate containing Nd and Gd supported on highly dispersed carbon material, are highly active in this reaction. Depending on the experimental conditions, the main reaction products are the corresponding epoxides and diols with preserving the structure of the initial hydrocarbons.

The epoxidation of olefins is an important reaction in the laboratory as well as in chemical industry [1], because epoxides are widely used as raw materials for epoxy resins, paints, surfactants, and are intermediates in organic syntheses. Catalytic olefin epoxidations have been extensively studied over the last two decades employing a variety of catalysts such as Mo, W, Re and also using acidic and basic metal oxides such as hydrotalcites and alumina [2]. Especially, the catalytic function of polyoxometalates (POM) has attracted much attention [3,4] because their acidic and redox properties can be controlled at atomic or molecular levels. Various catalytic systems for H2O2-based epoxidation catalyzed by POMs have been developed.

Tungsten-based epoxidation systems with hydrogen peroxide have attracted much attention because of their high reactivities compared with molybdenum analogues and inherent poor activity for decomposition of hydrogen peroxide. This article focuses on the H2O2-based epoxidation of olefins catalyzed by POMs including our recent investigation on POMs containing Nd and Gd.

The procedures of preparation of the catalyst and the experiment performing are similar to that described earlier in [5,6]. In the experiments, Nd- and Gd-containing samples of polyoxomolybdate were used, prepared by mixing aqueous solutions of (NH4)6Mo7O24, (СH3COO)2Nd, Gd(NO)3 of chemically pure grade, 85 % H3PO4 and carbon material obtained by the interaction of CCl4 and metallic Al according to the method of [6]. Stirring was continued for 8 h at a temperature of 85–90°С, followed by evaporation of the suspension and heat treatment of the dry residue at 150–180°С.

The individual isomers of methylcyclopentene-1- and 3-methylcyclopentene (MCP) were used in the epoxidation process. These compounds were derived from cyclohexene by isomerization by a known method 7 and separated by rectification.

Initial experiments show that the oxidation reaction occurs at a higher rate when using a small amount of C1-C2 carbonic acid than the catalyst obtained. The main products of the reaction are the corresponding epoxides and diols.

It is known that peroxocomplexes are formed under the following scheme when H2O2 interacts with polyoxomolybdate or polyoxotungstate. At the same time, polyoxometallates are separated by H2O2 into Me2O3(O2)42 and PO4MeO(O2)222 peroxy fragments (where Me-Mo or W atoms).

The activity of the second fragment is much higher than the first one. In the complex formed by the extract of this fragment, a new complex is formed in the following scheme between the electrophilic oxygen atom of the intermediate formed by the formation of a molecular intracellular hydrogen bond and the higher reaction capacity of the substrate. The decomposition of this complex results in the formation of the corresponding oxide.

Temperature is one of the important factors influencing the conversion of active oxygen and the direction of oxidation reaction, derived from the interaction of the hydrogen-peroxide catalyst. The results of oxidation of 1-MCP with 41 % H2O2 at 40–70 ºC are shown in Figure 1. The dynamics of epoxidation or dihydroxylation of these isomers at 40–50ºC indicates that the process requires a large induction period. Thus, the conversion rate of MCP-1 through 6–7 hours is no more than 22.5–30.6 %. However, the rate of hydrogen-peroxide decomposition varies between 65.0–72.0 %.

It is assumed that under these conditions, the polyoxomolybdate molecule forms complex with H2O2, but this temperature is insufficient for the formation of the three-component complex-polyoxomolybdate-H2O2-MCP. Due to the high rate of decay of the binary complex formed under these conditions, the main focus of the reaction is ineffective H2O2 decomposition. The oxidation rate of the substrate also increases when the temperature rises from 50ºC to 70ºC (up to 65ºC when the 1-MCP is present). In addition to increasing substrate conversion in this temperature range, the epoxy selectivity increases within the first 6 hours. However, as the reaction time increases, the amount of epoxide produced in other directions, mainly as a result of hydrolysis, decreases the amount of oxidation, on the contrary, the amount of diols and the corresponding unsaturated alcohols increases. Since the MCP isomers are practically insoluble in water and are formed in the corresponding three-dimensional complex water environment, the oxidation process must go on the surface of two phases. To increase the reaction rate, either the accelerator in the reactor must be increased, or the third component, which is well soluble in both phases, should be used as a solvent.

For optimal conditions, the following were accepted:

In the last two cases, the monoacetate effect of the epoxide and glycol in the catalyst by hydrogenation of 40 % KOH solution at 60ºC for 2 h after filtration of the reaction mixture, and the diols are separated from the system by atmospheric-vacuum deposition. Their degree of purity and structure were determined by the GMC, IR, NMR 1H and 13C analysis methods.

By using catalyst samples absorbed on carbon material as opposed to water-soluble gadolinium or neodymium-containing polyoxomolybdate in oxidation processes, the emission of both epoxide and diol is greatly reduced. In other words, along with the advantages of heterogeneous polyoxomolybdate samples (easily removed from the system and reused without regeneration), it has a disadvantage (less active). In addition to the polyoxomolybdate sample in the oxidation process, polyoxotungstate catalyst catalyzing Gd- and Nd- was used to solve this problem. The results obtained are given in Table 1.

The following optimal conditions are found for the corresponding diols: 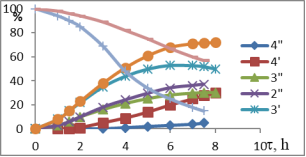 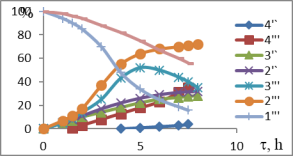 Thus, our studies show that if neodymix-modified polyoxomolybate catalyst is highly active in the reaction of cyclonic ketones condensation with aliphatic vicinal diols, olefins are more adsorbed and carbonated by REE in the epoxidation reaction with H2O2. The results will further expand the scope of the study, and control the synthesis of synthesized alkylic diols with aliphatic aldehydes.